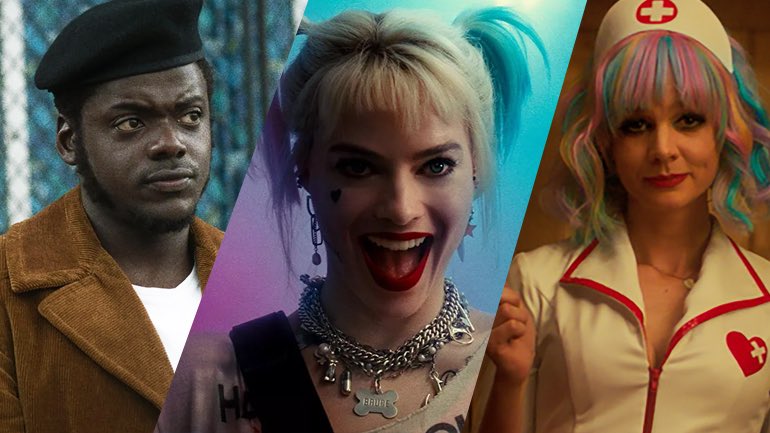 The staple of the awards season, the Academy Awards (commonly known as the Oscars) bring with them a flurry of films hoping to strike gold. With schedules being shifted, films being removed from contention, and the entire season being delayed, this year looks to be one full of surprises, twists, and turns. Since our last coverage, the first round of selections for four major precursors (the Golden Globes, Critics Choice, SAG, and Bafta Longlists) have been announced. Luckily, I, Awards Editor Diego Andaluz, will guide the way and help you get a leg up on your predictions and what to look for as the season continues. In this second installment, will established favorites like Mank and Nomadland lead the way? Do late newcomers like Malcolm & Marie and Cherry still have a chance? Read our latest Oscar predictions for February to find out!

The numbers accompanied by + or – next to certain films indicate how they have risen or fallen in the Oscars race since our previous report. You can find the list of nominations for the Golden Globes, SAG Awards, and Critics Choice also on DiscussingFilm.

Over the past few weeks, the ever-changing Best Picture category has finally started to solidify itself even further. Frontrunners including The Trial of The Chicago 7, One Night In Miami, Nomadland, and Mank have been in the race since fall, with those four all getting major boosts with sweeps or near sweeps of the category in other nominations. However, both Judas and the Black Messiah and Malcolm & Marie have taken a tumble here. Failing to nab a single Best Picture nomination (and not even making BAFTAs Top 15), if not for its timely themes and important message, Judas would be out of the race entirely. This most likely happened because as mentioned last month, Judas is too brutal to pull off a win in a year where One Night In Miami and The Trial Of The Chicago 7 employ similar themes in a ultimately lighter and more digestible way. In the case of Malcolm & Marie, while it was never expected to show up in many televised precursors, it missed out on the crucial SAG nominations – a key industry demographic it needed to win over. As of now, its industry-centric angle could still lead to a surprise, but it’s looking much less likely than before.

Last month, we said News Of The World would show up, and it did! With numerous acting nominations and a Picture nom at the Critics Choice awards, it is looking to shape up like a Ford vs Ferrari style contender that taps right into the older demographics. The Father missed a few crucial nominations but grabbed a Golden Globe slot to keep it in the running, while Ma Rainey’s Black Bottom nabbed those few but missed out on the Golden Globe, signaling a contender that is not quite as strong in Picture as many thought. Some strong contenders that showed up include Minari (with an important SAG ensemble nomination), but the strongest jump goes to Promising Young Woman

In line with the industry whispers we heard in the past few weeks, a strong collective buzz has emerged for Promising Young Woman, with sweeping nominations for Carey Mulligan and a strong showing for the film itself in Picture and Director. If there is one film that has been able to tap into the surprise industry buzz vein like Parasite did last year, it’s this one. While it won’t win due to its emerging controversial nature that will stop it from getting across-the-board acclaim like the previous Best Picture winner did, it has shown to be enough to catapult it from a Nightcrawler-like snub in the shadows to a worthy contender for a nomination.

Further down the road, major threats include Da 5 Bloods (which had its fair share of nominations and snubs alike), The Mauritrainan (the topical story has begun to build traction for its leading roles), along with Soul and Sound of Metal. One to tumble out of the category, unfortunately, is that of Cherry. While it suffered from a middling critical reception, we said that its award success hinged on Apple’s ability to spend big in traditional campaigning methods. While Apple showed up with major interviews, advertisements, and impressive presentations for voters, it was missing one crucial thing – a watchable screener. With only a few live screenings peppered throughout the months, Apple failed to send enough unlocked physical or digital screeners with its presentations to make an impact, failing to land a single nomination in any precursor. If the company doesn’t course-correct quickly, it could be known as one of the most disastrous campaigning efforts of the year.

While Anthony Hopkins (The Father) and Chadwick Boseman (Ma Rainey’s Black Bottom) seem to be the only two actors who can pull off a win, the question of who will round out the nominations is a far more intriguing one. Riz Ahmed has proven himself as of late, while Delroy Lindo missed out on a few important nods, (still having enough traction to round out the nominations). John David Washington took a tumble as he failed to get attention from SAG, with Gary Oldman taking his place (and more) following Mank‘s strong showing that hasn’t omitted Oldman in a similar fashion to De Niro last year. Though with Oldman and Lindo still uncertain, don’t be surprised if Lakeith Stanfield, Kingsley Ben Adir, or Steven Yeun take any of their places.

A category that we originally found to be much more defined, as always, the recent batch of nominations have shaken things up to the point where anyone can win. With Kirby’s counterpart in Supporting Actress being snubbed (more on that later), it’s put her nomination in doubt as Davis and MDormand hold strong. Carey Mulligan looks to be a near-lock for a nomination after waves of support have let her ride to frontrunner status. While the industry hasn’t quite embraced Zendaya yet (with only a Critic’s Choice nomination), it’s still a performance that could pull through. Old favorite Amy Adams (who despite no wins has 6 nominations in the past 15 years) or Day could change the category’s status as well.

Still one of the more competitive races of the season, the Supporting Actress category is one where at this point in time is still very much murky. However, some notable advancements have been made. Glenn Closes’ seven time nominee narrative has propelled her to the top after receiving multiple nods, making her likely frontrunner. Ellen Burstyn missed out on some key nominations to be bumped down, while Jodie Foster has had a strong showing at the Globes which could pull her all the way through. Yet, in line with before, all three of the major threats here could quite easily knock out others for a spot in the final five. Critical favorite Bakalova has nabbed nominations across the board, while Yuh Jung-Youn got crucial SAG and Critics choice nominations. Helena Zengel got some surprise recognition as well to make this one one of the toughest races of the entire season.

While so far it’s been a neck-and-neck race between Kaluuya and Cohen, the week, after Judas and the Black Messiah‘s woeful underperformance, it seems as if Cohen will be taking the lead as the face of the cast of The Trial of The Chicago 7 (which has become one of the most-awarded ensembles of the year). Odom Jr is up next, not having missed out on any major nomination, while Boseman’s presence in the Da 5 Bloods that heartbreakingly reflects his personal fate has managed to tug on voters heartstrings. The fifth slot could very well be one of the most chaotic of the season. Jared Leto has become a serious contender after nabbing nominations at both SAG and the Globes, while Raci’s critical favoritism and Bill Murray’s subtle traction could all put up a fight. If Trial shows up big across the board though, the competitiveness of the slot might lead to another cast member (most likely recent winner Rylance, but don’t count out Langella or Abdul-Mateen II) to sneak in as a true testament of the power of the film.

What was once known as a category pitting soley Zhao and Fincher against each other, despite Mank‘s overall dominance that highlighted Fincher even further, some new developments have been nice. Sorkin and King could very well give them a scare if their respective films begin to dominate the circuit, and Emerald Fennell looks to join her underdog counterparts after surprise nominations in both the Critics Choice and Golden Globes, creating a far more robust category than what was originally expected.