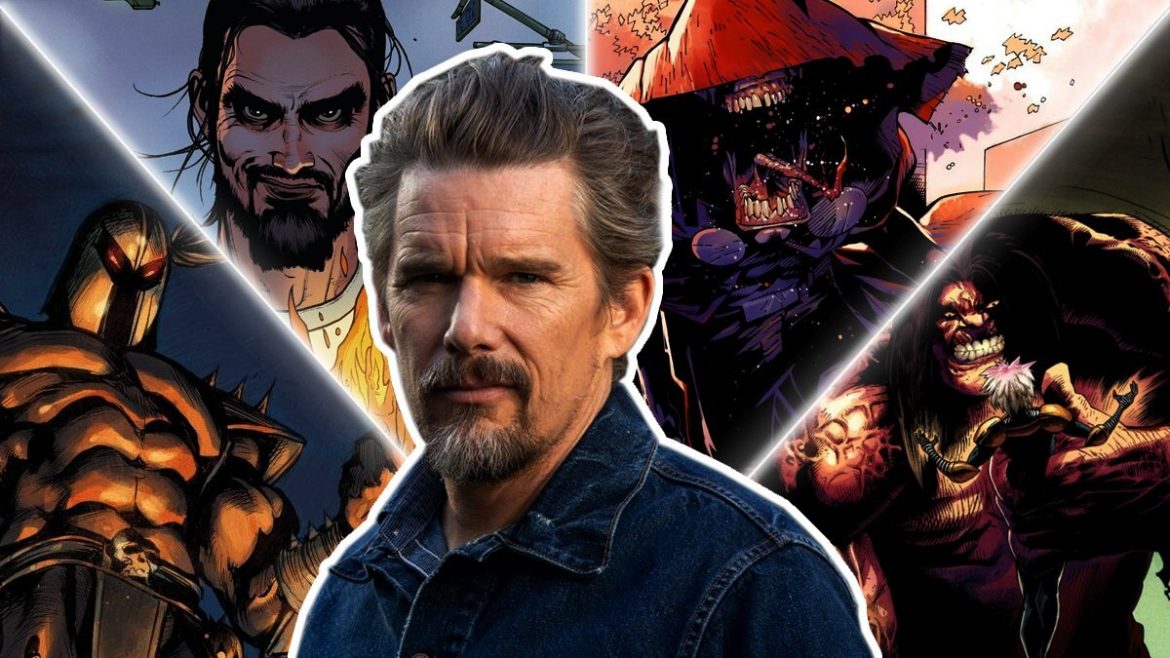 With the Disney+ Moon Knight series ramping up production and stars Oscar Isaac and Ethan Hawke spotted on set, the question has once again been raised: which Marvel villain is Hawke playing? Marc Spector, also known as Steven Grant, Jake Lockley, Mr. Knight, or (most famously) Moon Knight, has a nearly 50-year history in Marvel Comics and during that time he’s collected a vast rogues gallery. With the first set photo of Hawke in his role showing him wearing a brown suit with long, seemingly blonde hair and certain set reports having also mentioned him using a cane, there are some characters this look could point to.

The most popular guess among fans at the moment appears to be Marvel’s version of Dracula (a guess likely not insignificantly influenced by the popularity of a meme featuring Moon Knight and Dracula), though there’s not much to support this. Hawke’s appearance doesn’t coincide with what the character has been known to look like, and with a Blade movie coming up, there’s not much reason to use Dracula now. Additionally, with Raul Bushman, Marc’s arch-enemy, obviously off the table and Hawke unlikely to be playing Marc’s brother, Randall Spector (better known as Hatchet-Man or Shadowknight), two of Moon Knight’s most prolific villains have been removed from the equation, meaning that some interesting possibilities come to mind for who the Fist of Khonshu’s first on-screen enemy may be. Here are our five predictions for which villain Ethan Hawke will be portraying in the MCU.

Calvin Zabo was a scientist obsessed with recreating the experiment from Strange Case of Doctor Jekyll and Mister Hyde, a classic novel. This transformation would first lead him into conflict with Thor. Over his career as a supervillain, Hyde would fight several superheroes, including the Fantastic Four, Daredevil, Captain America, Spider-Man, the Young Avengers, and eventually, Moon Knight. He would face off against Moon Knight when Zabo was attempting to sell the remains of an Ultron body. Zabo was a member of both the Masters of Evil and the Thunderbolts. He’s also the father of Daisy Johnson, also known as Quake (portrayed by Chloe Bennet in Agents of S.H.I.E.L.D.).

A character that would no doubt be disappointing to see for fans of that show, Zabo made his live-action debut in season 2 of Agents of S.H.I.E.L.D. in 2014, played by Twin Peaks star Kyle MacLachlan. Due to the unsure nature of S.H.I.E.L.D.‘s canonicity in the MCU, there’s a decent chance that Marvel Studios wouldn’t take his role in the show as a reason to not use him in their own. Zabo already has a history with Moon Knight in the comics, even if it’s not extremely substantial, and his raw power could make for a good threat.

Zabo’s character could even be modeled closer to the original Jekyll and Hyde, mirroring Moon Knight’s disassociative personality disorder with one of Zabo’s own. Hawke’s appearance in the set photo supports this assumption as well, with his long hair matching Zabo’s hair from the comics and his brown suit easily capable of standing in for Zabo’s commonly green one. Additionally, Zabo has used a cane in several of his appearances, a design element that he doesn’t share with many other characters.

Carson Knowles, better known as Black Spectre, is the first of two characters to hold the name. A veteran who came back to find nothing waiting for him, Knowles eventually snapped and took on his alter ego. His plan had been to run for Mayor in order to destroy the city that he believed was responsible for his mistreatment, using his identity as Spectre to rally support for his cause through criminal means. This would bring him into conflict with Moon Knight and would eventually lead to Knowles’ death.

The second Black Spectre was Ryan Trent, a police officer who became obsessed with the attention that Moon Knight had received and adopted the title, determined to kill and replace him. He then went on a killing spree, starting with his own wife, determined to draw out Moon Knight and finish him with explosives. Ryan was caught in his own trap, however, meaning that he hadn’t even gotten to properly fight Moon Knight. While he was left alive, he never reappeared.

This is the most obvious guess, with Spectre representing another one of Mark’s slim gallery of repeating rogues. It would also allow for Marvel to use another ‘dark mirror’ character as the villain for an origin story, a trope that has been heavily criticized by fans but has also just made appearances in both Wandavision and The Falcon and the Winter Soldier. Hawke’s outfit could certainly be for a scene involving Knowle’s political career, and with the focus on the political climate following the Blip that The Falcon and the Winter Soldier has already taken, Knowles’ run for office could be tied to that theme somehow. There’s also the off chance that Knowles’s story as a veteran wronged could be used to bring in a character with a similar arc and one that Marvel Studios have recently gotten the rights to use once again: The Punisher. While the second iteration of Black Spectre hadn’t made nearly as much an impact as the first one, it’s possible that the two are merged in some way for the season.

Parker Robbins, better known as the Hood, was a low-level criminal who stumbled upon a demon, shooting it and taking its cloak and boots. These (mainly the cloak, which was linked to the realm ruled by Dormammu, introduced to the MCU in 2016’s Doctor Strange) granted him abilities. Parker used these powers to move his way up the world of crime and form a syndicate made up of supervillains.

This would bring him to Norman Osborn’s attention and, following the former criminal’s rise to power in the wake of Secret Invasion, Parker would be brought onto Osborn’s version of the Illuminati, dubbed the Cabal. After Osborn’s fall from power, Parker would move around a bit, trying to assemble the Infinity Gems, creating a new version of the Illuminati, before eventually being de-powered during a fight with Hawkeye.

While Parker isn’t a Moon Knight villain in the comics, there are several things pointing to the possibility of him showing up here. He fits squarely into the aforementioned interest in a dark mirror to Moon Knight, Parker himself being possessed by a higher being (Khonshu in Marc’s case, Dormammu in Parker’s). His design similarly mirrors Marc’s with his red cloak and hood paralleling Marc’s white design. Additionally, Parker is a character that blends the street-level side of the Marvel Universe with its demonic, magical side, as can be seen by him being a vessel of Dormammu and still using pistols as his weapon of choice. This makes him ideal to go up against Moon Knight, and his role as a crime boss also provides Marc with plenty of criminals to mow through before getting to Parker.

Luchino Nefaria was born to a line of Italian nobles. While his appearance and beliefs were always reminiscent of those from the early 20th century, his fascination lay with technology. His obsessions would lead him to take charge of the Maggia, an international crime syndicate. Nefaria used his technological research and criminal connections to further his fortune by selling criminals powers and high-tech weaponry.

Nefaria would eventually experiment on himself, gaining immortality and becoming one of the strongest men alive. Nefaria fought Moon Knight during his period as the Kingpin of Crime for Los Angeles. Nefaria’s daughter is Whitney Frost, also known as Madame Masque. Masque previously made an appearance as the villain of the second season of Agent Carter.

While Nefaria has a slightly limited history with Moon Knight, the potential inclusion of him as the villain for the series would make a lot of sense. Moon Knight has been described by Marvel Studios President Kevin Feige as an “Indiana Jones-type story”, and Nefaria’s international high-tech crime organization would certainly play into that description. Hawke’s appearance would match Nefaria’s old-world sensibilities, and while not as commonly utilizing one as Mr. Hyde, Nefaria has been shown using a cane in certain depictions. Nefaria’s daughter, Madame Masque, is also now known as an enemy of Kate Bishop, the new Hawkeye, and there have been rumors of Masque’s appearance in Hawkeye later this year. It’s possible that Hawkeye is used to introduce the Maggia, with Moon Knight then further clarifying its leadership in the MCU.

The true name of Sun King is unknown, but he wields fire-based abilities that first appeared during his childhood. As an adult, he joined the military but was discharged. He was sent to a mental institute and given the ‘name’ Patient 86. During this time, 86 was introduced to Egyptian mythology and began to see himself as the natural rival to Moon Knight, representing the Egyptian sun god, Amon Ra, opposite Marc’s moon god, Khonshu.

He broke out of the institute and took on the name of Sun King, working with Marc’s enemy, Raul Bushman, to destroy Khonshu. Sun King would gain followers while carrying out this plan but would be defeated by Moon Knight. After breaking out of a second institute, Sun King would team up with Moon Knight in order to stop a cult led by a Nazi, before turning himself in.

Sun King’s story is fairly new, with his first appearance being in 2017. While he would definitely satisfy the requirements for a dark mirror villain (much more literally than any of the others on the list), his story builds quite a bit on the fact that Moon Knight is an established character with a reputation. With Moon Knight looking to be the first appearance of Oscar Isaac’s Marc Spector, this may not be possible in the first season. While Hawke’s appearance doesn’t seem to line up with anything that Sun King has worn in the comics, the MCU is known to reimagine characters, especially their designs, and it’s possible that this is a case of that in action.

Marvel’s Moon Knight is expected to hit Disney+ in 2022!

Read Next: The Young Avengers – Everything You Need To Know