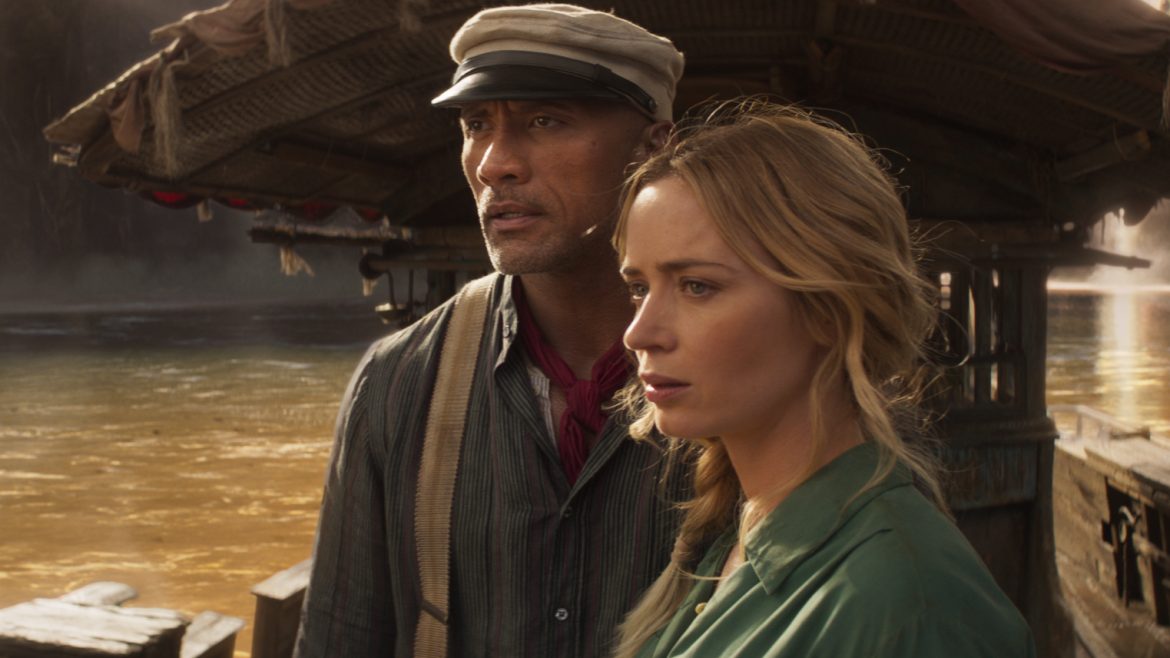 The list of ride-based films from Disney’s theme park repertoire is not very long, until now reaching merely six titles. Of those few, Pirates of the Caribbean was the only film (and subsequent franchise) that made its way into the hearts and minds of audiences en masse. The film managed to take a beloved ride, an original to California’s Disneyland, and build a believable, breathable world filled with colorful characters. It feels more or less inspired by the ride rather than a direct cinematic adaptation – something that helps it grow into its own, finding a story and tone that works well within the medium. If Pirates is the benchmark of success, with underwhelming disappointments like Tomorrowland on the opposite end of the scale, how does Jungle Cruise stack up?

Starring Dwayne “The Rock ” Johnson and Emily Blunt, Jungle Cruise’s tone lies somewhere between Indiana Jones and Pirates of the Caribbean – the kind of tongue-in-cheek swashbuckling adventurism that the original Disneyland attraction tries to showcase, albeit with a tinge of darker flavor. This aesthetic is mostly dependent upon CGI-rich set pieces, from turbulent river rapids to death-defying torpedo-hopping boat maneuvers, but is otherwise bolstered heavily by the performances of its two leads. Snappy and dry, the banter between Johnson’s Frank and Blunt’s Lily may start off as annoying, but at some point during the eye-blistering 158-minute runtime, you become accustomed to their back-and-forth dynamic.

Jungle Cruise definitely has plenty of its own writing flaws though, leaning into the chemistry between its dual protagonists was a good choice here – it’s the only element of the film that feels strong enough to justify an on-screen presence. This, ultimately, also helps it come off less like a Disneyland commercial and more like an otherwise normal summer blockbuster. This choice, whether consciously or not, is what allows the film to both grow beyond its limits as an inherent theme park movie and embrace them all the same.

Branching off from the film’s inspiration, Jungle Cruise opts for an explorer’s story with Lily Houghton at the center. Blunt embodies the character with a cool collectedness that combines the air of action movie star Harrison Ford with Mary Poppins, making for an interesting combination of competent British snark. Joined by her stuck-up, bougie brother McGregor (Jack Whitehall), she is in search of the Tears of the Moon – a rare jungle flower said to heal any ailment. Frank, a boat tour guide and long-time resident of the Amazon, introduces some familiar motifs and jokes from the original ride, including the “backside of water,” before eventually aiding the Houghtons on their journey. For being such a pervasive presence in “dumb fun” films, it’s a wonder Johnson manages to make Frank any different from his characters in the Jumanji or Fast and Furious franchises, but he does – largely thanks to he and Blunt’s irreverent chemistry.

Going head-to-head with Lily and Frank on their quest for the Tears is the larger-than-life Prince Joachim, enthusiastically brought to life by actor Jesse Plemons having as much fun as a jaguar-wrestling Rock. Although his role is not quite large enough to suit his boisterous on-screen presence, he is an undeniable highlight of the film, and would easily earn a spot among Disney’s most classic villains if he only had more to do.

As an adventure movie, Jungle Cruise falls somewhat short with only fleeting moments of genuine, exhilarating discovery and awe. For every minute spent gazing at the glistening, rosy backs of Amazon river dolphins, there are ten others that remind us that this place is not as magical as we may surmise. In some ways, that could be seen as a good thing; for years, foreign regions have been romanticized into caricatures of themselves, appropriating the cultures of native peoples and instilling unfounded ideas of mysticism and untamed savagery beyond the well-known urban world. But rather than choose to deconstruct these harmful tropes in a narratively satisfying (and sensitive) way, Jungle Cruise opts for a depiction of the Amazon that doesn’t feel far off from reality — one where travelers and colonizing locals perpetuate fables and legends only to turn a profit.

The film goes so far as to use the region’s primary historical colonizing force, Spanish conquistadors, as main characters – never once earnestly addressing the travesties that they wrought on Amazonian people. The use of these conquistadors may provoke interesting conflicts with the protagonists, but it also introduces an unshakable sense of cultural insensitivity. In the pseudo-fictional world of Jungle Cruise, violent conquerors aren’t even bad apples, they’re driven by good intentions; it wasn’t greed that drove them to pillage the dwellings of the indigenous tribes but familial love! The Spaniards are antagonists, of course, but there are multiple moments that seem designed to demand empathy, leaving you to question the film’s stance on comparable real world events. Landing somewhere between tone-deaf and outright offensive, certain sequences of brutality against innocent natives are even paired with a heavy rock guitar score that practically begs to be seen as “epic” – just one of multiple decisions that feel uncomfortably jarring.

Similarly, a major plot development late in the film causes further discomfort when considering its depiction of South American history. Trying to riff on the showmanship of the original ride, Jungle Cruise includes as many plot-churning rapids as it can, leaving the odd few to stick out worse than CGI dart frogs on computer-rendered lily pads. Among them is the faint implication that the region was made better by Spanish colonization, but most will likely graze past that momentary revelation. A number of these “twists” continue to build and imply that the Amazon is understandable and “civilized,” alluding to real-world parallels of progressive global politics, yet by the very end, the characters seem to hold the same stereotypical views of the southern hemisphere as magical and beyond the reaches of science! You can’t really blame them when the plot itself acts as a paradox to many of these grounding developments; undead conquistadors (very much a la Curse of the Black Pearl) and glowing heal-all flowers aren’t the most scientifically sound observations to be had. If Jungle Cruise opted for a more fantastical, unreal rendering of the Amazon like Pirates does with its sea-faring adventures, it would come across as a lot less self-conflicting.

While a confused amalgamation, the world of Jungle Cruise is extremely well-realized on-screen, making for a brilliant display of world-building by director Jaume Collet-Serra. With a more focused script and attention set upon a more considerate story, future sequels would be more than welcome — as long as we keep Lily and Frank at the series’s center. This would also offer an opportunity to continue developing Jack Whitehall’s character McGregor, who exists mostly as yet another stereotype here. What many will initially read as a caricature of upper-class wealth in an untamed wilderness is recontextualized halfway through to nearly reimagine the character entirely.

At this point it’s just a cliche; after a conversation in which he all but says “I am not straight,” McGregor will be the next role to be touted as Disney’s “first major LGBTQ character.” Suddenly his fashionable, snobbish aversion to the outdoors is no longer commentary on privileged upbringing (which he shared with his nature-savvy sister, after all), but a poorly conceived stereotype that feels ripped out of a movie made thirty years ago. Framed as an emotional character revelation, McGregor’s sexuality is not explored further as anything more than a throwaway moment to justify his being in the film. That’s absolutely not to say the representation isn’t welcome – it is – but Disney has an obvious ways to go.

That’s not the only thing that feels outdated from this movie! During an otherwise dismissable scene in the grand context of the film, Johnson’s character has a few sour “dad jokes” that would have been best left on the cutting room floor. It’s baffling that ableist jokes managed to sneak their way through the family-friendly guise of the modern House of Mouse, but here we are. In a world where punching down in comedy is so universally frowned upon, these aren’t the most egregious offenders possible but are still indicative of larger, overarching issues in the film’s script.

With some distasteful depictions of South American history and cultures, the heavy presence of stereotypes, and the flippant disregard for disadvantaged groups, Jungle Cruise isn’t exactly all great despite the charming charisma of its leads. With original source material riddled with issues of its own, this shouldn’t be much of a surprise either; as recently as January 2021, Disney renovated their Jungle Cruise ride to remove “negative depictions of natives.” Finding the balance between faithful adaptation and original innovations was always going to be a tough task, but Jungle Cruise fumbles the ball in some essential places. While on the whole, Disney’s latest live-action flick will likely leave you feeling adequately entertained, turning a blind eye to its many problems will only allow them to persist in Hollywood moving forward. The adventure genre has suffered this plague of other-ization since its inception, and it’s time we actively sort out the kinks.