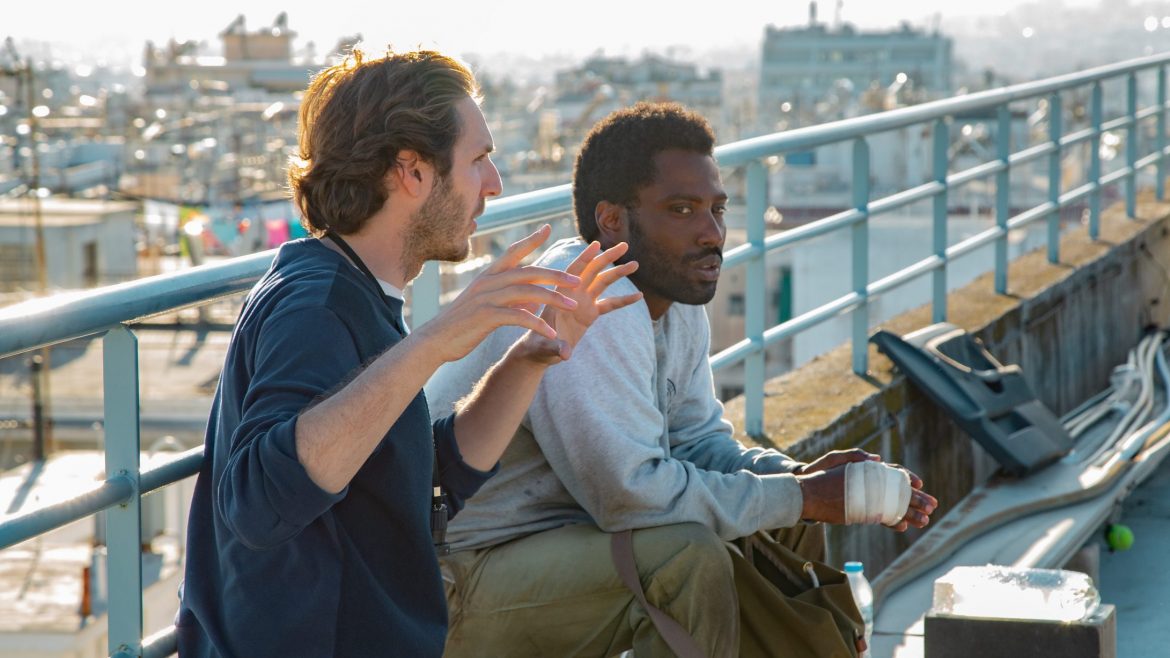 Beckett is Netflix’s next major thriller, boasting the all-star cast of John David Washington, Alicia Vikander, Boyd Holbrook, Vicky Krieps, and Panos Koronis. The film is the latest from director Ferdinando Cito Filomarino, most known for Antonia. (2015) and working as a second unit director under Luca Guadagnino, who served on this project as a producer. Beckett recently premiered at the opening film at the 74th Locarno Film Festival and will release on Netflix worldwide August 13.

The film follows John David Washington as an American tourist named, you guessed it, Beckett who, while vacationing in Greece with his girlfriend, becomes the target of a manhunt following a devastating accident. As he flees in a desperate attempt to survive and clear his name, Beckett becomes aware of a deeper political conspiracy in the country.

We are lucky enough to debut the first clip from Beckett, which features John David Washington on the run from the authorities. The combined cinematography of Sayombhu Mukdeeprom and score by Ryuichi Sakamoto creates a tense atmosphere that will prove to keep you on the edge of your seat, not only in this clip but throughout the entire film.

After watching Beckett for ourselves, we were able to exclusively break down the film with director Ferdinando Cito Filomarino. We talk on his past experiences working with Luca Guadagnino to now shooting with John David Washington on location in Greece. He also highlights how his collaborations with cinematographer Sayombhu Mukdeeprom and composer Ryuichi Sakamoto made this manhunt thriller even more unique to similar predecessors.

Can you first tell us a bit about how your past experiences working as a second-unit director on films like Call Me By Your Name and Suspiria informed your approach to Beckett?

Ferdinando Cito Filomarino: My own feature and then the short films I did, informed me the most. As much as I absorbed and learned from seeing Luca Guadagnino, working on his films, and how he summoned the complex structures that he needed for the very different films that he was making – doing it personally is a whole different thing. Aside from the logistical complex thing of organizing a film, it’s the responsibility of having a long narrative that I found most difficult. So I learned the most from making my first feature [Antonia.] which informed how to confront this one.

Beckett‘s cinematography is beautiful, can you tell us about your collaboration with cinematographer Sayombhu Mukdeeprom?

Ferdinando Cito Filomarino: Yeah, I was developing my first feature when I met Sayombhu Mukdeeprom. And in the world of independent international cinema, he was my favorite director of photography. He shot the movies of Apichatpong Weerasethakul, of course, which are all so beautiful. I got to meet him with the support of my producers and a great understanding and friendship started. I had this movie that I wanted to make in Italy, which I wanted to approach with a very personal angle and the movie was about an artist, so we needed to have a very specific kind of light to it. And Sayombhu is just a master at that. So then I decided that I don’t want to ever stop working with him.

On Beckett, again, even though the film is so different from Antonia. – it has genre elements and is very different – but we approached it in the same way. Based on the tone I felt the film needed, we tried to understand how to translate that into light. I like to reference photography, not so much films, but more so photography or paintings. Because of how Beckett is so location-based, we looked at a lot of street photography, a lot of American street photography in fact. We used this as inspiration to find the best way to exploit natural light, empower and harness it for the use of the story.

How did you go about getting the film’s many locations? Did you have all of them in mind or was it a matter of going out with location scouts in Greece?

Ferdinando Cito Filomarino: I didn’t really know. Much before this project, I came up with a story. We started writing the script with Kevin Rice and then we got the idea to set it in Greece. I had the opportunity to go there and a great local, a filmmaker, actually helped me by driving me around the whole mainland country, because I knew I wanted to start out in the mainland and avoid the islands and that sort of touristy idea. I wanted to go somewhere more unexplored internationally.

And so he drove me around. I did have some requirements, things that I was looking for, but, you know, we kept it open as we drove around a lot. Then it was interesting, keeping the requirements in mind, but actually, maybe our location wasn’t strong enough? “Okay, let’s change the scene to work for this location instead of the other way around!” So that was a fun process, and it was made with travel, old fashioned travel.

John David Washington plays the titular Beckett, did you always envision him for the role?

Ferdinando Cito Filomarino: I have to say I envisioned the character first because of my position. It would have been probably disappointing to imagine an actor and then what if he had a very specific idea of what I wanted the character to be? Because Beckett is an unusual character for this kind of movie. So in building his drama, his tone, his attitude – and then, of course, John David, seeing the skills and range that he offers in his films, both in terms of emotional range and technique he seemed like an amazing performer that could nail this perfectly. Which, of course, he did.

For most of Beckett, John’s character and the audience is unaware of why he’s being hunted, it’s quite a unique story. Could you tell us more on that?

Ferdinando Cito Filomarino: Like you just said with the audience and Beckett, that was key to me. The premise of the film was just, you know, this kind of Manhunt Thriller. There’s a lot of story, there’s a lot of things going on, and in some ways you can say there’s lot of information.

However, to me it was more important not so much to follow all of the information as a continuous flow, but more the experience of being in that situation with a character. That was more important to me. Therefore, it was interesting to construct a very specific structure behind the scenes. By following through the cluelessness of Beckett and learn details piece by piece, I find that the more relatable, realistic, and fun

A big reason why Beckett works is because the audience is always tense, how did you go about building tension?

Ferdinando Cito Filomarino: It’s a recipe that includes various things, which more or less have to do with mystery, a sense of danger and uneasiness. If you consider things that happen that are technically not supposed to happen, if you see a cop draw a gun on you, in theory, if you’re not a criminal, that’s unusual and definitely inspires fear. But I think the first thing that sparked everything to me was the idea of starting to film in a more dramatic tone, and then hijacking that with the genre element. That change in tone is key to establishing the tension to begin with, instead of starting right away with a chase, you know?

Finally, can you tell us about your collaboration with Ryuichi Sakamoto, the film’s composer?

Ferdinando Cito Filomarino: It was a true privilege. I basically learned about the power that music and cinema could have through Ryuichi Sakamoto growing up, and therefore, it almost seemed unreal to be able to meet with him, let alone collaborate with him. He has a very personal voice, in terms of music. Although working within genre, Beckett also has a very personal angle to it in its tone, and its central character not typically belonging to a genre like this.

So this juxtaposition was interesting for his approach as well in our collaboration. How do we play the genre elements that we need to play, but also find the inner music of Beckett himself and his personal crisis? And Sakamoto is the master of doing those things at the same time, seamlessly.