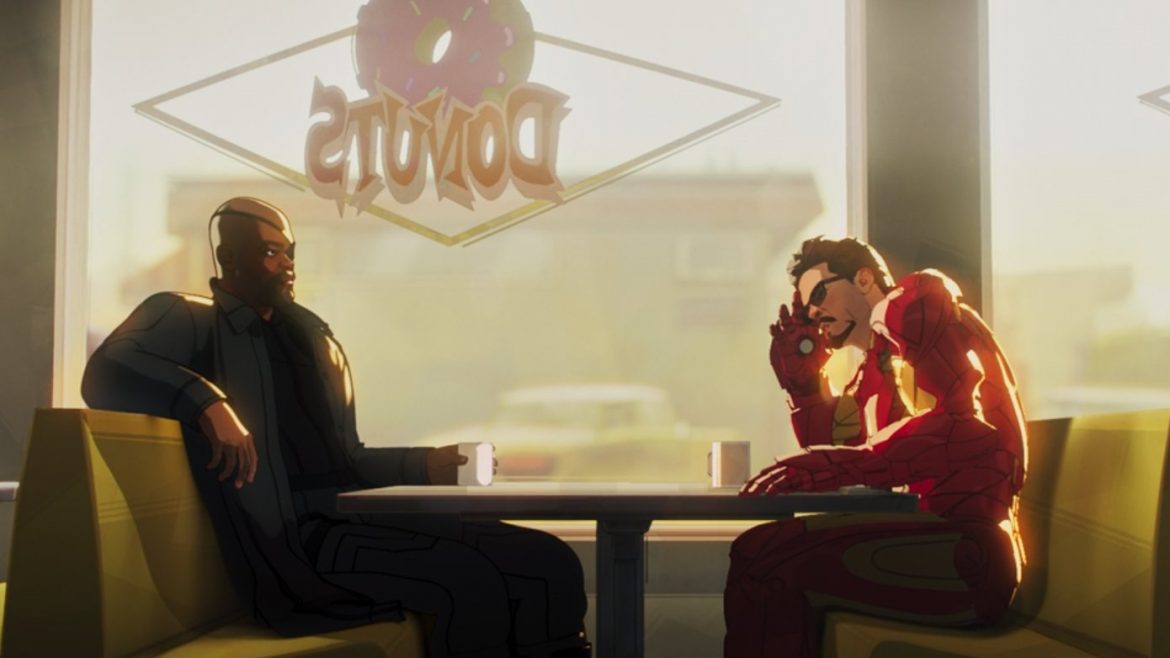 Spoilers ahead for Episode 3 of What If…?

Marvel’s What If…? is now on its third episode, and it proves to be the strongest yet as the quality incline from Captain Carter and T’Challa Star-Lord gets steeper.

The plot of the episode itself is centered around “Fury’s Big Week”, which is a key point in time in the MCU. As Nick Fury and S.H.I.E.L.D. begin to implement the Avengers Initiative, the heroic candidates on the list begin to drop dead, forcing Fury, Natasha Romanoff, and Phil Coulson into a whodunnit murder mystery.

But the question here is equally “who?” and “why?” Since the “what if?” scenario isn’t clear from the get-go, what changed in the MCU timeline for these events to happen? The final piece in our exclusive breakdowns with What If…? head writer A.C. Bradley, read on as we get to the bottom of this very unique Marvel mystery.

So the third episode, “Nick Fury’s Big Week”, is very complex. How did the idea come around for that?

A.C. Bradley: “Fury’s Big Week” is a period of time in the Marvel Universe where Thor, The Incredible Hulk, and Iron Man 2 all take place during one week. And a lot of fans aren’t even aware of that! But everyone in the Marvel building on the Disney lot is very aware of that. So that was actually something that was stated very early on. We’re like, “Yeah, of course, we’ll do something with that.”

I think in the original pitch document, I pitched it very lightly as almost a French farce. We’ll do a very heavy comedy episode, but when it came down to breaking it, we were like, “This isn’t lending itself to comedy, these movies, they’re not comedies.” Then I kept looking at the character of Nick Fury, and he’s a man that, you know, sees the bigger picture. Always has plans, always has secrets. Well, how do we find something new to say about him? What you do is you take all those secrets and all those plans, and you blow them up. Who would he be without the Avengers Initiative? Who would he be when his greatest life’s work is threatened before it can even start?

So when I was writing the episode with Matt [Chauncey], it was all about getting to that diner scene, which I think was a solid page longer in the original script of this moment of Nick Fury having that long night of the soul, having that crisis of faith wondering, was he ever on the right track? And what does he do next now that his greatest plan has turned to ashes? I love when we challenge characters’ beliefs, when we ask them to take a step back and either reconfirm who they are or pivot and change. This was a story where Nick Fury realizes that no, he knows what he’s doing. He’s on the right track. The world needs the Avengers, and while he may have lost the first names on the list, there are other heroes out there.

What was it like taking Fury himself, Samuel L. Jackson, through that concept?

A.C. Bradley: Oh, you don’t talk Samuel L. Jackson through a concept (laughs). He was great. He came in, he had already read the script. He already knew when I started pitching him the episode. He very politely said “I read it,” and I was like, “Oh, okay.” On my previous show, every once in a while, the actors hadn’t had time to read the script before they came in. So he was lovely.

You don’t really direct Sam Jackson, that man knows Nick Fury forwards and backward. He’s the best. The one thing I will say is that I got to read lines with him a few times. He’s like, “Well, why don’t you play off me? You read Natasha and I’m Nick.” I think this is an item on my bucket list that I didn’t even know existed, but to actually be able to play Natasha against Sam Jackson’s Fury was a very cool, surreal moment.

Now, The Incredible Hulk. It’s actually funny to talk about that film because, aside from Mark Ruffalo being in all the movies preceding it, there’s not really much reference to the canon of that. Not really until General Ross returns in Civil War, and now with Abomination in Shang-Chi. What was it like revisiting that film in conjecture with Iron Man 2 and Thor?

A.C. Bradley: It wasn’t much of a difference for me, I love all Marvel movies. And I was aware. I’ve seen The Incredible Hulk probably three or four times. I love the bottle chase sequence in the beginning. We wanted to make sure that with all three movies we pulled iconic moments that people would recognize. So for The Incredible Hulk, it was the Culver University fight scene. We wanted to use, if possible, the fight in Harlem. But the Culver one lends itself better to the story, so we went there. I did joke early on, “If we can’t get Ruffalo back are we going to ask Norton?” And I was told that Mark Ruffalo already agreed to do the show. He’s a very lovely human being, and he was great. He came in, had fun, and you really can’t get a better Hulk than Mark Ruffalo.

I was surprised to see, “This is The Incredible Hulk, but with Mark Ruffalo instead of Ed Norton.” That was a very fun moment to take in. Yet the main twist of the episode, which I absolutely did not see coming, was the decision to make Hank Pym the man who killed the Avengers. Obviously, he has a lot of issues with Tony Stark and the Stark family. Where did the decision to make him the killer come from?

A.C. Bradley: What would happen if basically all the Avengers are being murdered? Who will be responsible? This is before we actually laid out the plot. We came up with the idea that well, who hates the Avengers enough in this era of time? Hank Pym kind of was a natural choice. Again, I think that might have been Brad Winderbaum’s suggestion because he worked on Ant-Man, and he’s like “Hank would probably do it” and I was like “ He would do it for Hope.” The loss of a child would drive Hank to commit basically mass murder. Then the notion became, what if Hope Van Dyne had become a S.H.I.E.L.D. agent? I think it’s still in the final cut of the episode, is there a line that she was killed outside Odessa? Like so many months ago?

A.C. Bradley: Yeah, go watch The Winter Soldier. No one’s figured out that easter egg. I don’t think anyone at Marvel figured out that easter egg. The idea was, Hope Van Dyne is killed and that sends Hank over the edge. So he decides to make Fury suffer, make S.H.I.E.L.D. suffer. I love the idea that Nick’s greatest strength was that he can spot talents and recruit them. He knew who to put on the Avengers. He knows who’s going to step up and how to form a team. And that’s the one thing that Hank can’t stand about him. That fear of his greatest strength became almost his greatest weakness.

It’s already been revealed that Captain Carter’s arc is going to continue in the series, and pretty much every episode suggests a future for each individual story. You’ve got Ego finding Quill, Captain Marvel and Nick Fury finding Steve Rogers, etc. If there’s a future for Captain Carter, do you see a future for any of these other worlds?

A.C. Bradley: The ending twists that many of the episodes have, not all of them, came from a place of loving the Marvel tags – the Marvel credit scenes. So the idea was that we resolve the entire episode, like we resolve the T’Challa Wakanda Ravagers of it all. Then we give kind of what would be our mid-credit scene. So the hope is, if we do sequel episodes, if we do see the heroes later on, that we answer some of the questions raised in those twists. But they’re not meant to be ironclad promises of future episodes, it was just kind of “what would be a fun twist at the end of this?” The What If? comics were known for having very surprising endings. So we wanted to pay tribute to that.

What If..? premieres new episodes every Wednesday on Disney+

Read Next: What If…? Head Writer Explains How Marvel Zombies Came To Be