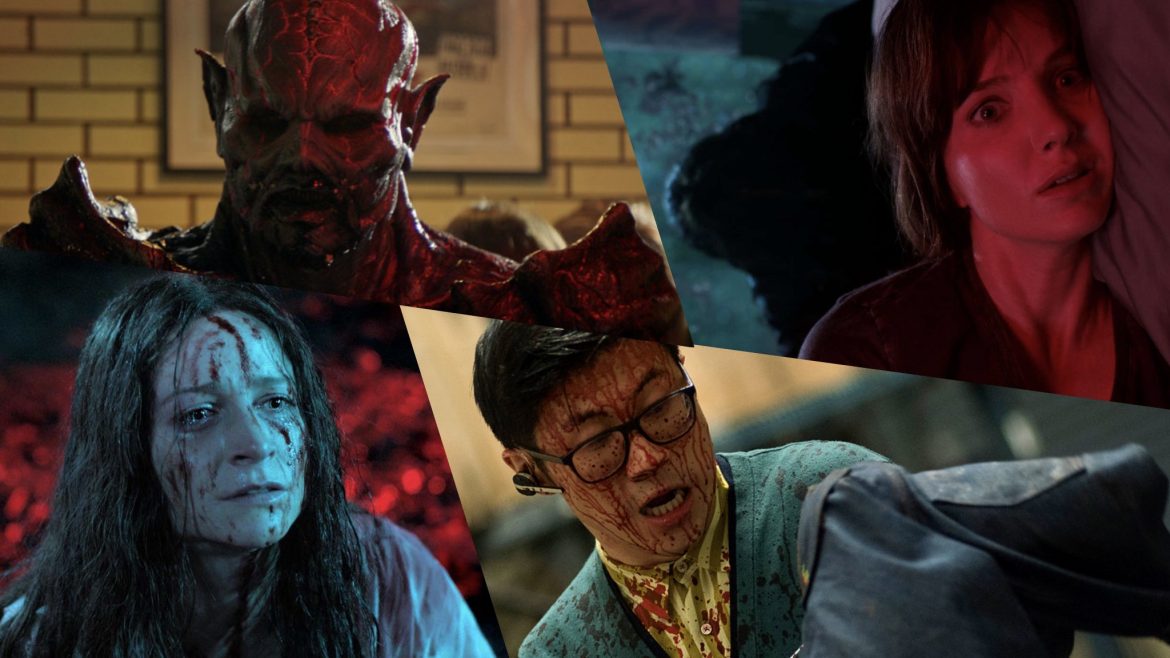 2021 has seen no shortage of a wide variety of horror films – proof that world-stopping events, such as a global pandemic, only fuel the genre more. The reigning champion for all things gory and gruesome continues to be streaming underdog Shudder, who have released a continuously impressive and memorable onslaught of originals and exclusives this year, several of which have made this list. Other studios, both big and small, have relished in the fun too – making it trickier to choose which films deserve to be in our top favorites or not. Not everything could make the cut, but we believe the 10 unique titles below deserve the utmost appreciation, especially in time for Halloween.

Our list for the best horror gems of 2021 (a crazy year if there ever was one) includes slashers, psychological nightmares, a billion-dollar filmmaker letting loose, a clever video game adaptation, an injection of fresh blood into a seemingly dead franchise, and more. If you’re looking for some new and weird and original horror to check out, or perhaps checking to see if there’s anything you’ve possibly missed from this busy year, here’s a good place to start.

Psycho Goreman
Where to stream: Shudder

Psycho Goreman is about as niche as a film can get. It’s a bizarre cocktail that mixes a low-budget 80s and 90s VHS aesthetic, the practical rubber costumes and makeup of shows like Ultraman and Power Rangers, the off-kilter comedy of a late-night Adult Swim sketch, and the hyper-violence of a Troma film. The plot centers on brother and sister Mimi (Nita-Josee Hanna) and Luke (Owen Myre) who stumble upon a glowing gem that awakens an ancient evil. Played by Matthew Ninaber in an incredible monster suit and voiced by Steven Vlaho, Psycho Goreman – as affectionately named by the siblings – was once on a quest to destroy the universe, only to be locked away. Now that he’s back, he can resume his quest. Problem is, the two kids have the gem that controls him.

This horror-comedy is genuinely, and admirably, all-in with its science fantasy universe, all done in a classic and practical way. They honestly just don’t make ‘em like this anymore, and the level of commitment to that kind of artistry – even though it’s for an increasingly silly movie – is truly a marvel. Psycho Goreman is incredibly campy and continuously impressive and hilarious.

Sator
Where to stream: Shudder

Sator is a fully immersive experience. It’s definitely a horror film, one that takes inspiration from folk horror and gives off a Southern Gothic vibe with the way it frames its central location of a cabin out in the woods. However, it’s also so much more – a singular, painstaking artistic vision, a master class in sound design, and perhaps even a dark form of therapy for its creator.

Much like The Blair Witch Project, Sator is more about creating a mood and an atmosphere rather than offering a generic linear narrative. Its scares come more from the power of suggestion, from the things that you don’t see, and its imagery is more haunting and melancholic than directly gory or terrifying. It even has a few moments of handheld camera work, presumably shot throughout the years that this film was in production. Sator is an impressive feat by any measure, but it’s all the more astonishing for the fact that its creator, Jordan Graham, did everything on it himself aside from acting. That includes directing, writing, cinematography, music, set design; you name it, he did it. The more you sink into this tale, following a man living out in the woods in search of a mysterious and terrifying entity known only as Sator, the more you’ll get lost in its trance.

Slaxx
Where to stream: Shudder

Elza Kephart’s Slaxx gets itself a nifty little audience right away with its premise about a possessed pair of designer jeans that goes around killing the employees of a clothing store. The murderous pants strangles and disembowels people, slits throats with its zipper, and even cleans up the scenes of its crimes. It’s unapologetically silly – the jeans can also hypnotize people and at one point breaks out into a Bollywood dance – yet surprisingly sharp, both in its sense of humor beyond the gory kills, and the larger thematic ideas on free enterprise and consumerism it has. Smart, bloody, and tons of fun in a crisp hour and sixteen minutes.

Jakob’s Wife
Where to stream: Shudder

This Shudder exclusive stars horror icon Barbara Crampton as a dissatisfied housewife named Anne dealing with the onset of middle age. An attempt at some excitement in her life has terrifying results when she’s attacked by a vampire (played by The Conjuring 2 and The Nun star Bonnie Aarons) and begins a powerful transformation.

Jakob’s Wife is a fresh take on vampire movies that still honors the classics, with a smart focus on how Anne’s changes don’t just lead to several very awesomely gruesome kills, but how it affects her already strained relationship with her husband Jakob (Larry Fessenden, another horror veteran). Part bloody scares, part marital drama, and a surprising amount of clever humor.

Spiral: From the Book of Saw
Now available in 4K UHD and Blu-ray

Spiral attempts to mostly wipe the slate clean for the Saw franchise, as in, you thankfully don’t need to have seen any of the previous entries to follow along. It’s a fresh story with all-new characters, set in a world where Jigsaw has been dead for quite a while now. The film stars Chris Rock as Detective Ezekiel “Zeke” Banks and Max Minghella as Detective William Schenk, his rookie partner. The two of them are tasked with leading an investigation into who’s behind a series of grisly killings – murders that resemble the horrifying work of the infamous Jigsaw. A bonafide copycat is on the loose, and they’re specifically targeting cops.

The Amusement Park
Where to stream: Shudder

The Amusement Park was made by horror icon George A. Romero back in 1973, although the movie was never released due to its content. Romero was hired by the Lutheran Society to create a film about ageism and the various problems that the elderly face in the United States for educational purposes. But being the artist that he was, Romero wound up making a film so genuinely disturbing and upsetting that the project was completely shelved, and thought lost until it was found and restored in 2017. It wouldn’t reach the masses until Shudder acquired the streaming rights this year.

To no surprise, Romero’s revived gem is a masterful bit of psychological horror that illustrates the legitimate terror of living as a senior citizen, following the events of one old man’s day at a surreal amusement park. Romero more than gets the point across. It’s incredibly fitting that one of the filmmaker’s very best creations comes from beyond the grave.

Censor
Where to stream: Hulu

Censor is inspired by the video nasty era of the UK, which saw a wave of absurdly violent and gory exploitation films flood the videocassette market. Naturally, this brought a harsh crackdown on what kind of content films should be allowed to show, and strict censorship laws swiftly followed. Director and writer Prano Bailey-Bond drops us into this notorious time frame to meet Enid (Niamh Algar), one of the members of the censorship board who considers her work to be an essential public service.

As Enid pores over countless hours of graphic violence, she believes that she’s protecting people from things no one should have to see. But when she views a certain film that brings back memories of a childhood incident, her entire world comes crashing down. Censor is exceptionally smart horror, one that tackles several social topics at once while still supplying plenty of bloody scares. A fine feature debut for this filmmaker who is surely just getting started in the genre.

Werewolves Within
Now available to rent on demand

An eccentric and memorable cast of characters is what makes Werewolves Within work so well as a fun mixture of horror and whodunnits. A new forest ranger named Finn Wheeler (Sam Richardson) arrives in the small town of Beaverfield and is welcomed by Cecily (Milana Vayntrub), the friendly mail carrier who shows him around the community, and Jeanine (Catherine Curtin), the owner of the local inn who gives him a place to stay. A snowstorm rolls in and Beaverfield’s power is knocked out, so the residents gather at Jeanine’s inn for shelter, only for some of them to start turning up dead with grisly wounds.

What’s most refreshing about Werewolves Within is just how modern it feels, both in its sharp sense of humor and how its plot manages to veer off the path of audience expectations. Things get very crazy, very quickly and following a series of great reveals, the ending manages to not just be the best part on its own, but it also elevates everything that came before.

Fear Street
Where to stream: Netflix

The slasher genre is in the midst of a current revival with many new and original additions to the blood-splattered halls of fame as well as fresh reboots of classics like Halloween. Still, few feel as ambitious and as stylish as Leigh Janiak’s take on Fear Street, R.L. Stine’s popular book series for young adults. That youthful spirit and energy are present in this trilogy of films, though Janiak appears to have also been given free rein to make things as gory as possible as well.

The three movies, each of which take place in different time periods – 1994, 1978, & 1666 – are fun, super violent, and also earn strong emotional moments. The intertwined story follows a group of people on a desperate quest to break the murderous curse that’s been haunting their town for centuries. We could have merely chosen just one film from the trilogy, but where’s the fun in that? The greater narrative runs through each entry, with reoccurring themes and motifs, and truly doesn’t feel complete until the very end. Without a doubt one of the most binge-worthy Netflix originals in terms of horror.

James Wan has hinted at just how utterly unhinged he can be when given the chance – look no further than the third act (and let’s face it, most of the first two acts) of Aquaman or select parts of Saw, Insidious, and The Conjuring. But his latest work is undoubtedly his wildest yet, and Wan pulls from everything he’s become famous for to create something bizarre, creative, and extremely entertaining.

Malignant centers on a woman named Madison (Annabelle Wallis) who begins receiving shockingly gruesome visions of a mysterious murderer. You never know what direction Wan is going to veer into next, and its unapologetic love for genre and style make it one of the very best horror flicks in recent years.

Read Next: The Conjuring Universe Ranked Worst to Best