Home » ‘The Wheel of Time’ Review – A Worthy Successor to the Throne?
TV

‘The Wheel of Time’ Review – A Worthy Successor to the Throne? 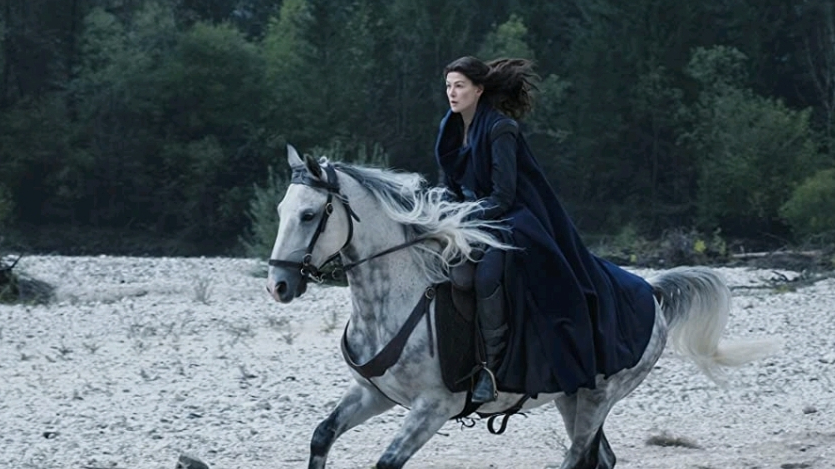 In one Age, called the Third Age by some, an Age yet to come, an Age long past, a wind rose in the Offices of Jeff Bezos. The wind was not the beginning. There are neither beginnings nor endings to the turning of the Wheel of Time. But it was a beginning.

For the uninitiated, Robert Jordan’s sprawling 15 book saga (yes, fifteen – 14 main books and 1 novella) is beloved within the fantasy genre. The Wheel of Time chronicles an epic struggle between good and evil, balancing thrilling action and captivating political intrigue in a fantastical setting, a place hinted to be our world in the very distant future. Since its initial release in 1990, the series has sold over 90 million copies worldwide, and the ripples of its influence can be felt throughout the current landscape of fantasy. Influence that is arguably on par with the likes of Tolkien’s Lord of the Rings or more recently, Martin’s A Song of Ice and Fire. It makes sense that when Amazon was tasked to find the next big fantasy hit, Jordan’s sprawling classic was considered. It checks all the boxes for what they were looking for: “magic,” politics, war, romance, a built-in fanbase, and did I mention the series also has an ending?

After seeing the first six of eight episodes, it’s definitely fair to say that The Wheel of Time is off to a strong start, and the show has the potential to become everything both the studio and fans have wanted for years. When Rafe Judkins was chosen as showrunner in 2017, he had a seemingly insurmountable task placed before him. Not only being tasked with this massive adaptation, but as a self-proclaimed fan of the novels himself, he likely knew that there was a careful balance he had to strike. What to keep in, what to get rid of? What can be changed to fit the story he’s telling, and what must stay the same, lest the die-hard fans turn on the show?

The basic premise is that the Dark One, who was sealed away at great cost thousands of years ago, is breaking free. The only person capable of defeating him is the Dragon Reborn, who may just as easily destroy the world as save it. When the show opens, Moiraine (Rosamund Pike) recounts this for us in detail as she prepares to set out in a search for them. Eventually, this leads her to the Two Rivers and to five uniquely powerful young people, one of which she believes to be the Dragon Reborn. That all might sound familiar. Chosen One stories are a dime a dozen. While true that some elements in this series have been done better elsewhere, what makes these tropes come across not as cliché are the characters, portrayed by the incredibly diverse cast Judkins and his team brought together.

The Wheel of Time is at its best when it lets Rosamund Pike flex those acting chops. She is without a doubt the best part about this, particularly because of the powerful scenes she shares with Daniel Henney’s Lan Mandragoran and Sophie Okonedo’s Siuan Sanche. The rest of the cast is strong as well, they’re mainly fresh faces but all of them manage to hold their own. Though Zoë Robins’ Nynaeve al’Meara does stand out the most from the five in both performance and in the story, having several scenes throughout the season that rival even that of Rosamund’s outing as Moiraine. The season’s duos of Perrin Aybara (Marcus Rutherford) and Egwene al’Vere (Madeleine Madden), and Rand al’Thor (Josha Stradowski) and Mat Cauthon (Barney Harris) are also carried by solid performances; the latter actor having had an awkward exit from the show both on and off-screen.

The weakest elements of the show are mostly due to adaptational choices paired with a limited budget that I hope will increase as the series progresses. That might alleviate some of the issues. As in The Wheel of Time is limited in the scale of its sets, and limited with the scope of the world it’s trying to build. The channeling of the One Power is this story’s interpretation of “using magic,” for lack of better wording. It is the main VFX featured on screen and yet it still manages to feel insignificant, lacking weight. Oftentimes not coming across well visually, and only being saved by the actors selling it with their movements and expressions.

Any fan of the series will tell you Robert Jordan loved to take his time. There were times for me where I frequently found myself wanting to skim entire chapters. Yes, that probably makes me a “bad reader.” However, Amazon’s adaptation, oddly enough, has the opposite problem with its pacing.

A lot of plot happens in these first six episodes, and that’s not necessarily a good thing. I’d argue that nearly every major story beat would be better served if they were given more room to breathe. It feels rushed. More time was needed for character development, and traveling around this world for more than what Amazon ordered would allow for that. It leaves a few characters left underdeveloped, and the main threat not feeling all that dire, something I’m hoping that the final two episodes will rectify. I can’t help but think that if the show had at least one or two more episodes, most of this wouldn’t be a problem. There’s certainly more source material to draw from, and more than room enough to get creative.

While many of the narrative changes here are interesting (like introducing certain roles earlier to add more intrigue to the story), others are not. A specific example would be the character of Perrin. His introduction here is a drastic departure from his beginnings in the book. I suspect that it was to give new audiences a reason as to why Perrin is the way he is in the novel, but the change has yet to make sense. Not only is it cliché writing, but it also undercuts a lot of the best parts of his character; potentially making a lot of his arc redundant. Rarely has an adaptation been well-received when big changes are introduced for seemingly no good reason. These are the kind of decisions that make you pause and wonder exactly what the writers are doing.

Though, not every change is bad. A lot of the first book is told from a singular perspective and the show manages to split its time more evenly between the packed cast. Ultimately, this leads to a more engaging adaptation, with the writing mindful of the events to come and making the overall flow of the narrative streamlined compared to the novels. This should make it easier for those unfamiliar with the material to follow along and become fans in their own right. No doubt this is exactly what showrunner Rafe Judkins and Amazon are hoping The Wheel of Time does.

Every studio wants the next “big thing,” the next Game of Thrones. On the contrary, this show is not trying to be that, thankfully. It presents a setting that is less inspired by the West, and pulls from a mix of cultures that are usually not highlighted in these big productions. Among the more recent fantasy adaptations, The Witcher and Shadow and Bone to name a few, it is nothing if not unique. The Wheel of Time is certainly by far the best at delivering meaningful representation that doesn’t feel like a pandering afterthought.

For many fans of fantasy, myself included, the success of any show within the genre feels like a bit of a win. That’s because it stands to reason that if one show can succeed in a post-Thrones world, why not more? But the next wave of adaptations (the ones not already based on successful properties) probably won’t happen without another hit leading the pack. Could The Wheel of Time be that? Given a few more seasons, it absolutely could. It has a lot going for it, and for a first season with obvious limitations, it’s good, and in some ways, better than expected. But The Wheel of Time could be great, and with a story as definitive and epic as this, it has no excuse not to be.

The Wheel weaves as the Wheel wills on Prime Video November 19!

Wheel of time is nothing like game of thrones. So trying to compare it. It’s pathetic at this point

This series almost completely ignore key components of the source material that made the fan base. Changes to key storyline for the sake of the AWOKEN, and the uninspired is revolting.

The TV series is a failure its so off base in the first episode that you could call it very loosely based on Robert Jordan books and the director made changes that make no sense because I can.