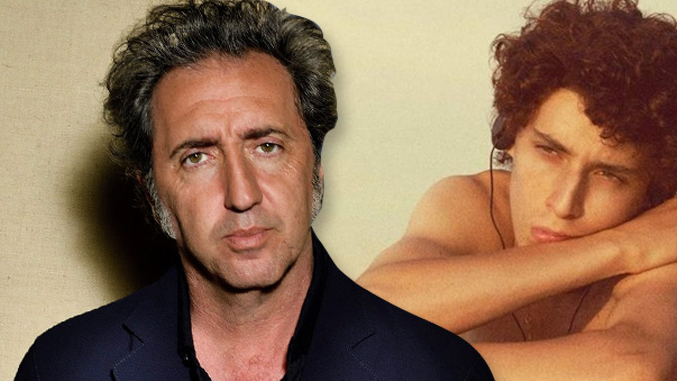 After premiering at last year’s Venice Film Festival to great success, winning the Grand Jury Prize, Netflix released The Hand of God in the thick of awards season in mid-December. The film’s resonating portrayal of youth along with its timely release would secure nominations at the BAFTAs, Critics Choice, and many more in the lead up to its chances for Best International Feature at the 2022 Academy Awards. Acclaimed Italian filmmaker Paolo Sorrentino is best known for previously winning the Oscar in this very same category with The Great Beauty in 2014. Now, after a two-season long stint of television work with Jude Law on The New Pope, Sorrentino has gone back to his roots with The Hand of God, a film set in his hometown of Naples in the 80s that is a loose, autobiographical exploration of his past.

We were lucky enough to sit down with Paolo Sorrentino to discuss his excellent work, specifically focused on The Hand of God after the new burst of exposure it’s been given since its big Oscar nomination. The coming-of-age tale of an awkward Italian teen with a strong admiration for football legend Diego Maradona, who can’t seem to get a grasp on his large family, the film’s strong reception from a wide variety of audiences comes to no surprise. Together with Sorrentino, we dive into the process of casting the film, capturing the essence of his youth for this particular story, and the response to having Netflix release such a personal project of his across the globe. Fans of The Hand of God will find much to appreciate in Sorrentino’s honesty within our exclusive deep-dive below.

It’s been said that The Hand of God is a very personal story for you, can you talk about what made you want to explore your own past through film?

Paolo Sorrentino: Many times, having dinner with friends or family, people told me that the things that I tell them are interesting and sometimes funny. So years ago, I thought that it was a good idea to gather these things. This was one of the reasons. Then there are also more personal reasons, like all the pain I felt when I was young – it’s something that I’ve brought with me throughout all my life. I realized that, over the years, I didn’t do any great improvements to ease that pain, I had kept this long monologue within myself. [The Hand of God] was an exercise of some of my obsessions and thoughts. I thought years ago, maybe a movie about my personal story can help me to try and solve this problem. This pain was the most important idea.

In The Hand of God, football legend Diego Maradona has such a big effect on the city of Naples and its people. What did you find in his football as a young man that has stuck with you all this time?

Paolo Sorrentino: When Maradona arrived to Naples, I was 14 years old. He was a representation of the beauty of youth. He was young, he was 24 years old, and he was the most popular football player in the world. He was full of life. He was full of charisma. So it was very easy for a guy like him to become an example for young people. I desired, like all young people of my generation, to be like him because, at the same time, he was so important, so popular, so famous, and so good at playing [football]. But he came from a complicated situation: he was poor, he was not a traditionally handsome man, he was somebody that was closer to the common people, like me.

Let’s talk about the film’s large ensemble cast, did you find it difficult juggling them all on screen?

Paolo Sorrentino: It was very fun. They are all actors from Naples, from my city, that I knew very well, mostly. They are very friendly and are very kind to me. Sometimes, in this sort of race among them, they run the risk of overacting. So, in that case, I had the role to stop the overacting, but it was pretty unusual that it happened. It was definitely fun.

You’ve worked with Toni Servillo many times now, what do you find compelling about him as a performer that makes you want to continue collaborating with him?

Paolo Sorrentino: He’s a very good actor, we have a wonderful relationship. He’s always very brave, which is something that I appreciate a lot. I am a little bit skeptical about actors that are afraid to play a character that they do not resonate with too well. So Toni Servillo has all the characteristics that I love in an actor, in addition to being a wonderful person.

Someone that is new to the industry is Filippo Scotti, the star of the film. Can you talk a bit about casting him?

Paolo Sorrentino: The casting director and I saw many young actors from my city. He is a very good actor, but he was also shy and there was something in him that reminded me of myself when I was his age. So I decided that he was the right person to play this character.

The film has a big tonal shift mid-way through, what do you want people to take away from the story’s themes and the way that everything comes through in The Hand of God?

Paolo Sorrentino: In my mind, I did this movie for young people. In the beginning, as a script, it was important to read it to my kids in order to understand the concerns and the pain that young people are going through, even if we belong to different generations. But it’s not easy for a young boy to understand that an old person had the same problems. When you’re younger, you can’t imagine that your father had exactly your problems when he was young. So young people were my reference for this movie.

I, simply, love the idea that this movie communicates something very simple. Even if youth can be very painful and sometimes dangerous, the idea of the movie was that there is always something behind the wall. There is a future – even if it’s impossible to see – that future is waiting for you. The main goal is for love and, above all, hope that young people take away from watching this movie.

The visuals in The Hand of God are quite striking. Can you talk about the creative process of envisioning the film along with cinematographer Daria D’Antonio?

Paolo Sorrentino: I asked [Daria] to make the cinematography sober and to always have an ambiance, in the lighting, without using too many effects. As I said, this idea of the future was the most important thing. In order to realize that, I thought the best option was for the light and the costumes to take a step back. The style was something that my cinematographer and I understood from the first day of shooting. We understood that being still with the camera, without doing too much, was the best way to focus on the actors.

Talking about the film’s main location, Naples, were they all locations you were already familiar?

Paolo Sorrentino: Most of the locations were from where I grew up, so it was all very familiar to me. I simply staged the film in a city I knew, without looking for anything special.

The film is on Netflix and is playing in some cinemas, lots of people are seeing it in many different ways. The Hand of God is also nominated for Best International Feature at the Oscars. How have you been taking this positive global response in?

Paolo Sorrentino: I am very happy. It’s something of a gift because, as I said, at the beginning I just needed a movie for myself in order to try and fix the pain that I had in my mind for many years. The simple fact that I made the movie was enough for me to be happy. But the things that happened later, like the Oscar nomination or the interest of Netflix, so that the movie can be seen by many people, is another great gift.

What type of projects do you see yourself doing next, as this film was a very personal undertaking. Would you like to continue along this path?

Paolo Sorrentino: I don’t know yet, but probably I’ll do something different as this movie was very mature. In my work, being mature is not fun. So it’s probably better to not be mature next time. I need to do something completely different, something silly!

The Hand of God is now streaming on Netflix