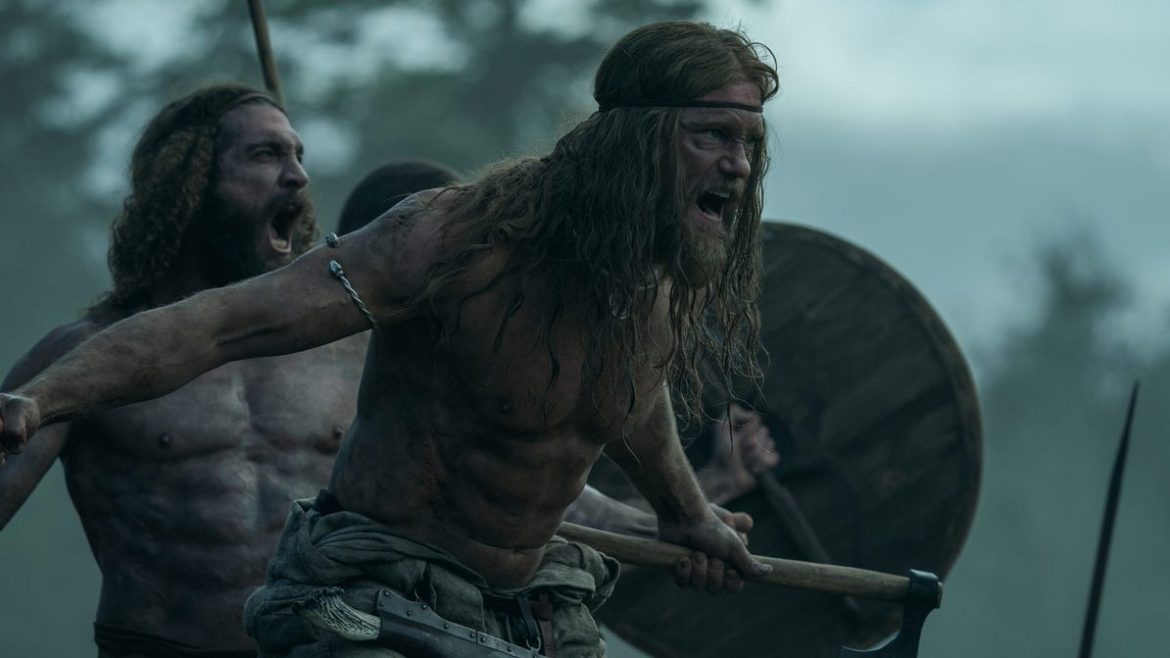 Robert Eggers is back and more brutal than ever. Swapping out the dark, comedic surrealism of The Lighthouse for visceral, hot-blooded anger and gore, The Northman aims to take its place amongst cinema’s greatest epics.

Based on the Scandinavian legend that inspired the renowned and beloved Hamlet, Eggers’ tale follows the young Viking Prince Amleth (Alexander Skarsgård) as he seeks vengeance against his traitorous uncle (Claes Bang) for the murder of his father, King Aurvendil (Ethan Hawke). Those familiar with the classic Shakespearean revenge play (or its even more well-known animated Disney adaptation on the Serengeti) will not be all too surprised by this film’s plot, but that’s far from an issue; nearly beat for beat, Eggers whirls the directorial baton with as much prowess and efficacy as one twice his age, summoning a world and characters so fully realized that you’ll swear to the Allfather that this film’s $90 million dollar budget funded the creation of a working time machine.

That is to say, this film’s most impressive feat is its presentation of place and people across every department. With this being just his third feature, writer-director Robert Eggers has accrued a reputation for his meticulous attention to detail and period accuracy; from the sea-faring colloquialisms of his oddball lighthouse keepers to the stilted, yet poetic vernacular of his accursed Puritans, the well-researched worlds of the New Hampshire-born director share a deep reverence for history and the cultures from which they were birthed – and The Northman is no different.

The cast-iron foundation for the film’s bold visual identity, The Northman is inhabited by sets and locations that feel lived-in and loved. Gorgeously antiquated longhouses with thatched roofs nestle together into little farming villages, their interiors seemingly only ever illuminated by the same candlelight and campfires that bathe the film with grounding physicality and texture. Lacking the clean, corporate production design sheen that plagues much of modern cinema, these intricately designed Viking settlements fit so well into the landscape that one would think they were timeless, surviving relics from the year 900, or that they simply sprung up from the Earth on their own accord.

Beyond its man-made sets, there’s something to be said about the film’s comfort in both acquiescing to its surroundings’ demands for attention and fully leaning into their power; for the first time in recent memory, the over-used descriptor of “wide landscape shots that feel like Lord of the Rings” wouldn’t be entirely inaccurate. Iceland’s grassy hills and menacing volcano (the Gate to Hel itself!) seem to be made for this film, offering the ravenously desolate atmosphere a constant source of fiery emptiness.

For all this gushing about the film’s natural beauty and historical naturalism, Eggers doesn’t entirely abandon mystique; The Northman toys with the tantalizing veil of fantasy, weaving a dense web of hallucinatory visions deep into its storytelling framework with seemingly effortless strokes. In this sense, its epic aspirations are triumphantly realized. The Northman places you in the eyes of its protagonist and showcases its mythology with the nuance and subjectivity of a relatively restrained religious fable. It’s not presented as fact – that’s not Eggers’ way – but neither is it entirely ruled as fantasy; it’s up to the audience to absorb and accept the more magical and supernatural elements on their own terms.

Yet, somehow The Northman is easily Eggers’ most accessible film – as best evidenced by the film’s conventional three-act structure. From expertly choreographed long-take battles to enchanting 35mm portraiture that feels closer to mainstream silk-smooth clinicalism than that of his last gritty and grimy outing, this film sees Eggers’ style edging into the realm of traditional Hollywood artifice.

The tonal cohesion between myth and legend is not only a testament to Eggers’ skilled manipulation of the film’s gaze, but to the powerfully grounding performances at its center. Skarsgård’s Amleth is a husk of a man animated solely by fury and his unsatiated thirst for revenge – and it feels like it. Skarsgård turns a simple character into a complexly gripping presence and somehow manages to cast impressionistic moods across his toned physique (which is very Viking-ish in all the ways you’d expect, in case you were wondering). He’s definitely playing it up, though never crosses the line into ham territory.

The film’s most show-stopping moment is one that shines a period-accurate, flame-bearing torch on Nicole Kidman’s Queen Gudrún, Amleth’s mom who has married her husband’s killer. Kidman’s performance, which until then had been understated and naturalistic, suddenly turns boisterously sharp and cutting, working to pivot the rest of the film towards a new horizon. A scene that brings so much narrative dynamism to a world we thought we knew that it ultimately underlines the film’s biggest flaw.

While Eggers’ three films do show a clear development of taste and style, The Northman only proves many of his biggest critics right. Whereas the vague nothingness of The Lighthouse can be construed as intentional (and arguably comedic in its own right), this film’s muddled sense of theme and subtextual narrative feels like it could be enough to say that… maybe he wasn’t trying to say anything at all?

Even though that’s probably not entirely the case in The Northman, there is a clear sense of hesitation in the manner of character growth and thus any real thematic progression. Amleth’s late-game proclamation of “kindness towards kin and hatred towards your enemies” does all but stab Rose Tico through the heart, stunting his character without any kind of filmmaking shift to comment on said decision. Static characters – especially those who are morally corrupt – require outside elements to comment on and critique them, and this film’s scarce moments of clarity render only a pliable moral stance amidst the bloody chaos.

It’s easy to surmise that Eggers was too caught up with entertaining a newfound large audience with the immersion of his Scandinavian Epic: a painting of historical accuracy and at its center a “real” person who doesn’t need to learn a lesson – and exists merely to validate his own beliefs. But when the film offers up glints of commentary on sexism and gender roles, or just even more genre-common themes like fate or violence, it feels like a disservice to continue on without any look back (especially in a way that doesn’t strongly feel like that’s the point).

It’s why Anya Taylor-Joy’s character Olga (with whom Almeth is in love) often feels so haphazardly placed in this story; she seemingly serves paradoxical functions that awkwardly pull her between the line of “obedient partner” and a more independent thinker closer to modern taste. This blurred line, of course, exists because of the film’s perspective: a relentless, distinctly male gaze that can pause only a moment for affection. A film can’t exactly serve to critique a textually unwavering worldview that is never questioned or meaningfully challenged. Perhaps hyperbolic, it’s hard to truly get a feel for Joy’s performance with the film losing interest in her complexity the instant the next action scene arrives. In relation to our protagonist, she is largely one-note with a side of spunk until the script calls for her to jolt into emotive action; a symptom of a restrictive point of view. It’s a film that feels led by a beat sheet – not character.

The film’s closing moments are big and bombastic, and feel like an accidental declaration against any kind of character or filmic growth, a total disregard of reflection in favor of yet another showy action scene; even with a story that functionally acts as a tragedy, Eggers opts to stick to his trite lens of heroism until the bitter end.

And yet, one has to be sure that this was no accident; Eggers’ directorial hand all but flawlessly enforces his vision of realism and perspective throughout the entirety of the film in a way that could never feel unintentional. In framing the entire film through the eyes of Amleth, Eggers shies away from any kind of complicated narratives textures; the character’s steadfastness translates to a film that doesn’t evolve in its gaze or commentary. Instead, he presumably cranks the dials in the opposite direction and plays into the violence, hoping the audience can see past his wildly entertaining, blood-stained lens to discern the film’s real meaning.

In keeping its thematic core stretched so thin beneath the text, The Northman loses almost every spark of thought-provoking lightning it occasionally stirs. There’s some commendation to be had for the strong flavors of bold defiance, but conventional character structure can only be decried so much as it is effective; the lack of interest (or effort) in pursuing even a semblance of quieter, internal storytelling is frustrating for a filmmaker of such demonstrably high talent.

In spite of its missteps, Robert Eggers’ entrance onto the mega-budget blockbuster stage holds enough flair and violent pizazz to save itself from obscurity – though it lacks a portion of the scrappy charm and charisma that makes his previous flicks feel far more alive and appropriately made. With a little more thematic focus and clear emotional progression, The Northman could’ve been one for the ages. However, its indulgence in brutal immersion will undoubtedly still capture the imagination of the cinematically-starved pop culture moment not purely for novelty alone.

The Northman is now playing in theaters!