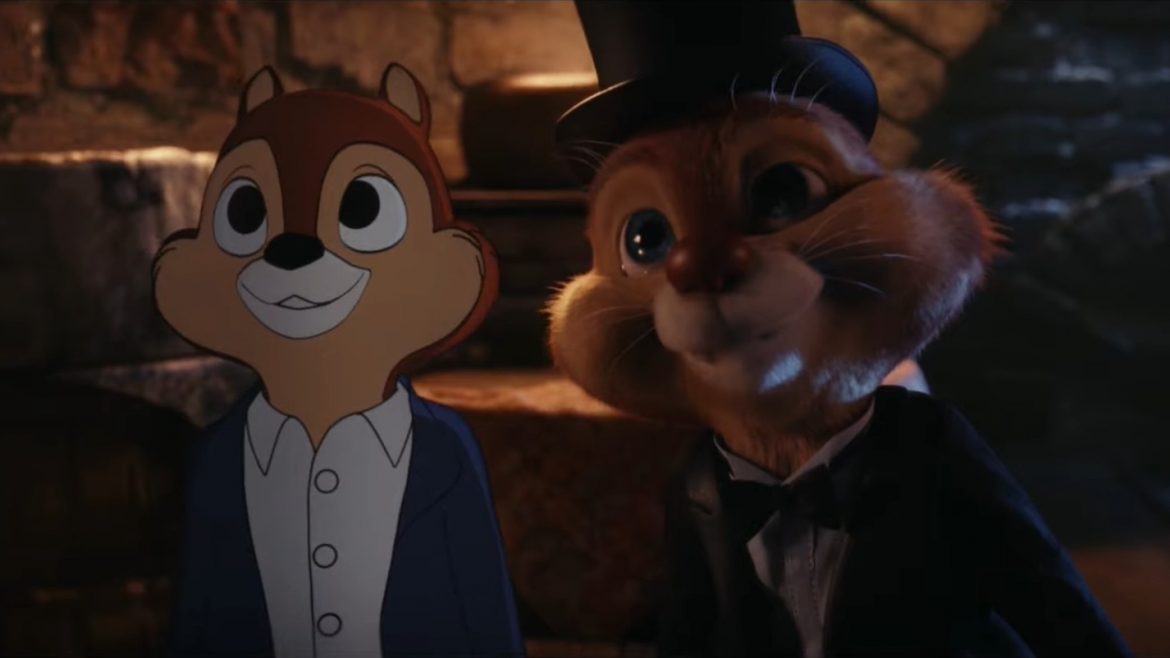 In the current overstuffed media landscape of rebooted and revived franchises and intellectual properties big and small, we’ve gone through a lot of stinkers. At the same time, a handful of genuinely inspired films and stories have broken through in the most unexpected places. Much like the wondrous, awe-inspiring, and intelligent 2014 Lego Movie, Disney’s reboot of their 80s Chip ‘n Dale: Rescue Rangers cartoon unexpectedly and miraculously arrives with a lot to say, particularly about the state of animation and endless Hollywood remakes (both of which Disney themselves are major contributors to). It also manages to be extremely entertaining and genuinely hilarious in its own right, with an impressive and dizzying array of characters that go beyond just Disney properties.

The film stars John Mulaney as Chip and Andy Samberg as Dale, the two star chipmunks whose hit television show ended 30 years ago. The former best friends have gone their separate ways and become different people, but when their old castmate Monterey Jack (Eric Bana) goes missing, they reunite to find him and uncover a deeper mystery that runs through Hollywood’s dark underbelly. Directed by Akiva Schaffer (Hot Rod, Popstar: Never Stop Never Stopping), the Disney+ exclusive Chip ‘n Dale: Rescue Rangers is a witty and earnest celebration of animation as art and a smart satire of the entertainment industry that honors its obvious predecessor, the incomparable Who Framed Roger Rabbit?

We sat down with Chip ‘n Dale: Rescue Rangers screenwriters Dan Gregor and Doug Mand, who have spent years bringing the film to life and creating the immersive live-action/animated world it takes place in. They discussed the process of running wild with the script while still making a talking pair of chipmunks feel like real people with real problems, how Disney responded to their ideas, and what properties they may tackle next. Of these potential future projects, they really hope that this won’t be the last we see of these new iterations of Chip and Dale.

How did you become involved with this rebooted take on Chip ‘n Dale: Rescue Rangers?

Doug Mand: It’s been a long road. We started writing this movie seven years ago. Disney came to us along with Mandeville Pictures, the producers of this property. They were kicking it around and wanting to reboot it as the world we live in right now, in terms of rebooting old intellectual property. They asked us if we were interested and to be quite honest, we were like, “Why?” For everything that we do, I would ask ourselves: What are we saying here? What’s the purpose, especially with a reboot? What’s the purpose of its existence? Do people really want a Rescue Rangers movie? We are both fans of the Disney Afternoon, we love all those shows, and we love Rescue Rangers. But at the same time, it wasn’t something that we put on a pedestal and considered to be the be-all and end-all franchise.

So we asked ourselves why would we do this? Do people really want this? As we started to discuss it, we naturally started to put those questions into our characters’ mouths. As we started to do that, it took shape and we came back to Disney. We had this take on it and it’s definitely more meta, poking fun at the franchise and at the world of reboots. And to their credit, they were like, “Do it, we love it. Let’s go for it.” We wanted to do a send-up to Roger Rabbit. It was one of our favorite movies of all time and it’s been over 30 years since that movie was made. That’s how it really came about.

They gave us the green light to go write this kind of weird movie that went a little against the grain and we just wrote it thinking that they would never make it. We were writing this movie that we actually really do enjoy. We relate to these characters, we relate to this concept, this underlying story about a friendship that has gone through different phases and now these two people are living different lives. We loved it and we just didn’t think they actually would make it. But they did!

Was this always envisioned as a live-action/animated hybrid? How did you approach that?

Dan Gregor: Yeah, elemental to the concept of them being actors who played parts who now live in Hollywood, we felt like we really wanted it to be in-universe to Roger Rabbit. So it had to be a live-action/animation hybrid in a fun way. But again, that’s also one of those things that has become a bit of its own trope in movies. We wanted to be self-aware as to like, “Why another live-action/animation hybrid?”

As far as writing for animation, obviously, there are a ton of visual gags and specifics that are animation only. But, emotionally, what was really important for us was to not write down to the audience or to the characters. A lot of animation is very particularly driven towards writing down to children. First, I don’t think you should ever write down to children, I think that they can really manage much more mature messages and they appreciate it. Second, it was important that these characters have adult relationships, adult complications, and adult emotions. For us, in writing live-action, that’s something we always do. It’s important for us, regardless of the medium or the place, to try our hardest to write the characters as real people.

Did that give you more freedom in the writing process?

Doug Mand: Yeah. We wrote it just letting our imagination run wild, thinking that they’re probably not going to make it as most scripts don’t get made. There was something very freeing about it and fun. We asked ourselves, if these characters are real people who live in this world, what does a six-inch character’s house look like? What does their car look like? And their pets? Is it a regular pet? So there was a lot of fun to be had.

Dan Gregor: What does drug addiction look like in this world?

Doug Mand: When Akiva Schaffer came on board three years ago, he became the captain of the ship and really embraced that wonderment of building this world where so many things are possible along with these rules that we’ve set up. There was something very freeing and fun in the way that it was executed, we’re incredibly happy with it.

Besides all the cameos and cross-franchise stuff, there are also some really deep-cut references to the original Rescue Rangers series. Do you guys have a passionate history with the show?

Dan Gregor: I really did grow up obsessed with the Disney Afternoon. I was racing home every day after school to see DuckTales, Darkwing Duck, Tailspin, Goof Troop, and all that stuff. So Rescue Rangers was a huge part of that. We definitely grew up very much in love with these characters. But one of the joys also was like, you know, I don’t have a Rescue Rangers tattoo or anything. I’m not living that Rescue Rangers life. I think being able to jump into this world without too much sanctity was really important for us. So we didn’t feel like this was a property that needed to be wholly serviced, to the people who grew up loving it. It was important for us to not necessarily treat that with so much reverence. The movie had to really poke fun at the idea of being reverential towards that stuff.

What’s next for you two? There were murmurs of you developing a remake of Grumpy Old Men.

Doug Mand: Things move very slowly until they move incredibly fast in this business. There are movies that we’ve written, like Grumpy Old Men, that exist and that we would love to have made. We wrote Rookie of the Year with Dan attached to direct with our good friend Phil Jackson, who’s a very talented writer.

We’re hoping that people really love [Chip ‘n Dale: Rescue Rangers] because we think that there’s a world here to explore. There are other things and characters that we can write about, we just kind of scratched the surface. We hope that people love it and we get a chance to continue to work in this world. Other than that, we continue to push forward in this industry as we look for interesting projects and try to create our own interesting projects whether in television or in film.

Dan Gregor: Keep writing nice stuff about it and you’ll get Rescue Rangers 2. You have more power than us at this point!

Doug Mand: Yeah, you definitely do.

Chip and Dale 2022.
A rare squalor happened, of course. The characters are like the pictures of a bad artist, flat and empty. Facial expressions and forms are alien. There is no aesthetic admiration for this attempt at 3d expression. No grace or beauty. There is no depth and love, not an adequate plot. Inappropriate flat humor. A fierce mockery of the secret. An absurd untalented product without a sense of beauty, reminiscent of the same pirated products from the movie. They dumped everything in a heap and made a huge unintelligible dump. A bunch of some defective characters, like the Sonic who talks about the existence of the original Sonic, by the way … Completely unreasonably mocked the key points, just for fun. One can often hear about the main delicate event that this is such a specific joke — an attempt to justify the incompetent “creators” who, due to their “giftedness”, have no idea how great creations continue. If no one understands the joke, is it a success? We all understand how society looks at those who joked unsuccessfully. And how they perceive those whose jokes are not appropriate and not funny. What do those whose jokes are funny only to them look like. For this, usually, you can get in the face. And even if otherwise, if everyone and everything suddenly understood, then this fake does not automatically become magnificent and worthy of its original. Comedy is completely out of place here, as are its creators-comedians. They do it under the sauce “We love the Rescuers.” Well, well… Couldn’t do it, really, like Disney, in general.
Only that picture was remembered, which hung on the wall at the “actor” Monty. And how wonderful it would be if the film (or its redemption) were in this style and with an adequate plot.Luckily, this is not an original reality that could continue canon. To understand this substitution, which tried to continue the series, it is enough to see in the film an episode with the participation of Akiva Shaffer, who allegedly filmed the original series in 1990, be it wrong – thanks.
It is a pity that Toby Shelton is not involved in this, as well as the creators of the original.

The Mane 6 maybe could cameo again in the sequel, but with speaking roles. They could introduce themselves to the Rescue Rangers so they know their names, teach them about their homeland of Equestria and its culture, explain what cutie marks are if they confuse them as tattoos, and Twilight could explain what an Alicorn is.