Amber Midthunder Details Her Own Physical Stunts on ‘Prey’ 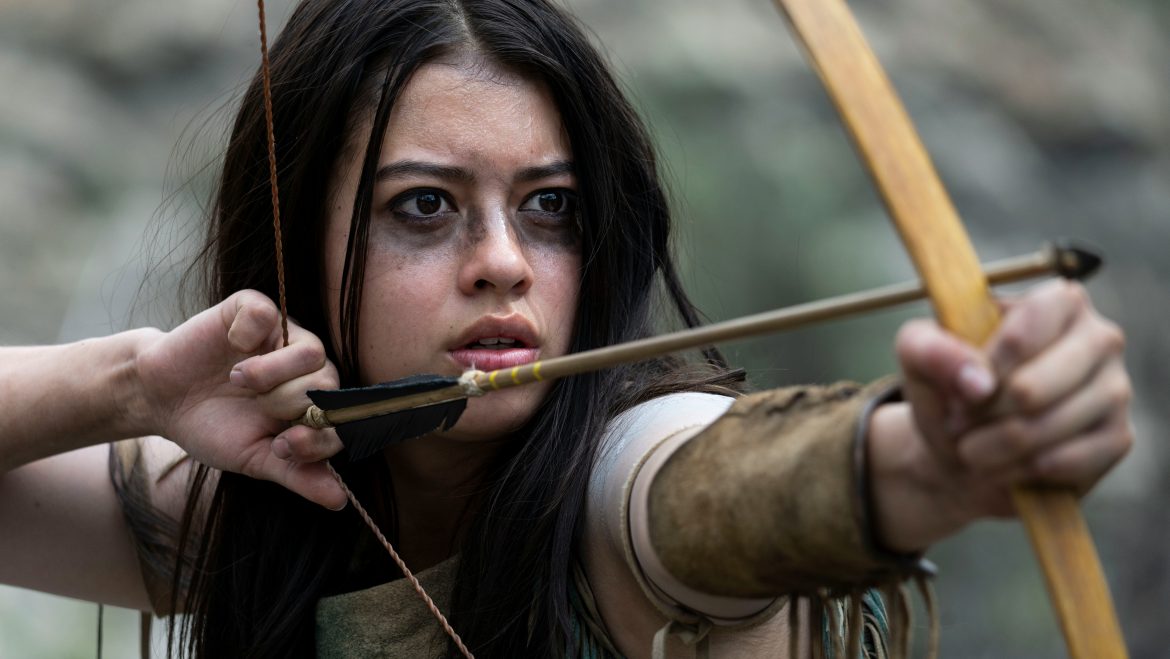 Prey takes the beloved Predator franchise back to its survivalist roots in a big way, delivering on all the tense thrills and white-knuckle action that made the 1987 original such a lasting phenomenon. Amber Midthunder and Dakota Beavers star in Prey as brother and sister duo Naru and Taabe, two Comanche warriors in the 1700s who end up in the sights of the new Feral Predator, the very first of the iconic Yautja species to visit planet Earth. Naru and Taabe must band together to face off against the extraterrestrial trophy hunter and use both their wits and their strength if they’re to survive.

Directed by Dan Trachtenberg in his first feature film since 2016’s 10 Cloverfield Lane, Prey is an intensely physical film to witness in motion as Midthunder, Beavers, and the rest of the cast dash, leap, and horse ride through the Great Plains and forests of North America. The Predator series is often recognized for its rigorous and intense physical regimens before and during filming. Amber Midthunder and Dakota Beavers, along with Trachtenberg, weighed in on the physical prep for Prey during a recent press conference.

“The movie was, I would say, entirely physical,” says Midthunder. The lead star went on to detail a four-week boot camp that she, Beavers, and all “the other boys in the movie” had to endure before filming. Amber Midthunder shared that their Prey boot camp featured weapons training with “Comanche-style archery, spears, and tomahawks,” whatever it takes to take down a Predator essentially. Additionally, the stunt team was heavily involved in these early stages, as they were beginning to strategize many of the film’s tactical battle scenes. However, according to Midthunder herself, none of this training takes the cake as the most challenging aspect of Prey – that actually came later during the shoot itself.

Amber Midthunder states, “For me, probably the scariest thing was the river because the idea of live water, it’s both very exciting and terrifying.” As Naru trudges her way across thick forest and rocky terrain in search of the Predator, not realizing that she’s literally being hunted by her target, she encounters various obstacles that throw her off her track. From dangerous wildlife to invasive French trappers, the historical setting makes it harder for both Naru and the Feral Predator to achieve their hunt. One such scenario sees Naru having to survive by escaping danger via a river stream, which is much easier than it sounds like when the film crew of Prey chose to shoot the sequence practically in freezing temperatures.

“It was summertime, but it was glacial runoff water… so it was so cold,” Midthunder recalls. “We were there for like five days. So for five days, I would wake up and be like, ice bath!” Considering that Naru in Prey is Amber Midthunder’s largest starring role yet, such a stunt comes with a heavy amount of pressure, not only to get the right take, of course, but to do so safely more importantly. “Before I got in, I was just watching [the river] filled with anxiety. But it ended up, you know, being pretty cool.”

“Not to mention, by the way, the difference in elevation as well,” adds director Dan Trachtenberg. “All of the physical training, that’s challenging on its own, but to also do that for us that are not quite used to working at that, even walking around with that elevation was pretty challenging,” says the filmmaker, who likewise, is too helming a project on a size unlike anything they’ve done before. Although, Amber Midthunder wasn’t the only one who “went through the wringer” on Prey as Trachtenberg likes to say. Co-star Dakota Beavers went through a similar rough process and approached their Comanche warrior role with just as much eagerness to get down and dirty.

Dakota Beavers described the behind-the-scenes of Prey merely as Wicked, and he took this term to a whole new level. “Luckily, I told Steven McMichael, the stunt guy, that I wanted to do all my own stunts if I could, and thank goodness he let me.” This hard effort can especially be seen in Taabe’s main confrontation with the Feral Predator, which sees him catching the alien creature off guard while on horseback. “For me, the horse riding was just the best thing ever,” Beavers proclaims. The actor proved to be a natural at best, for he only had to add that “I got to ride horses a lot, and it was 10 out of 10.”

Amber Midthunder, Dakota Beavers, and the whole cast and crew really pulled off quite the feat with Prey. “The most inspired and thrilling the franchise has been since Arnold first trekked into that jungle in ‘87,” the film now also stands as what could be one of the best action flicks of the year. Prey is filled with evident moviemaking passion, whether it be from dedicated actors willing to go above and beyond in their physical roles or filmmakers willing to up their game in return.

Prey is now streaming on Hulu