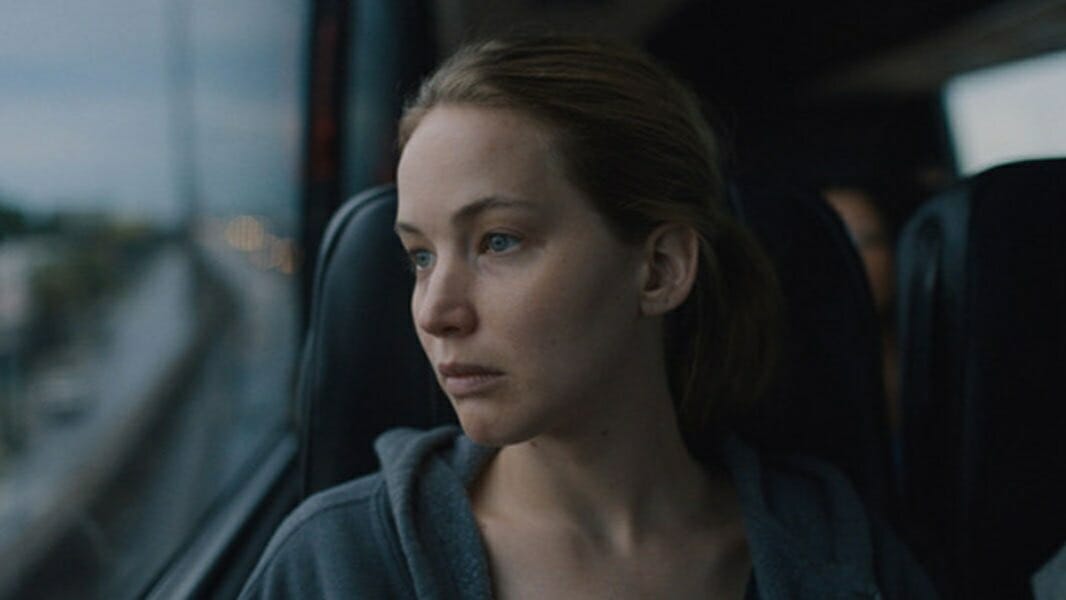 Trauma isn’t always loud, obvious, or explosive like it’s portrayed countlessly in media. Oftentimes it’s more subtle and lurks under the surface. Causeway is a story forged from that quieter counterpart. The film debut of theater director Lila Neugebauer, starring Jennifer Lawrence and Brian Tyree Henry, Causeway is a film about trust, healing, and acceptance. It dissects the idea of how humans innately need each other and tend to be drawn to kindred souls similar to our own so that perhaps we may connect with one another.

We follow Jennifer Lawrence as she disappears into the role of Lynsey, a soldier struggling with PTSD and a traumatic brain injury after returning home from Afghanistan. Her journey to healing, both mentally and physically, is a grueling one that begins with rehab as she relearns how to walk, how to brush her teeth, drive a car, and so forth. In Lynsey’s return to her childhood home and living with her absent mother, we see her fall into unhealthy habits and a hopeless headspace as she struggles with juggling her medication and doctor appointments. In a total loss of control of what to do about her future, she finds the only answer in returning to the army, and so that becomes her obsession and overarching goal.

The only positive catalyst that appears in her life is in the form of James (Brian Tyree Henry), a local mechanic she meets when she rolls her smoking truck into a lot. Their friendship blossoms and they soon become more and more vulnerable with each other as they open up about their unique pasts. They come to realize that the skeletons in their closets are strikingly similar. Lynsey busies herself with a pool cleaning job in an attempt to keep herself occupied as well as to regain strength in hopes of passing her re-enlisting evaluations. Alongside her mental health, these are two things she feels she has little control over anymore. Maybe the least amount of control she’s ever had in her life, and what is left is a worn down, tired soul.

The performances in Causeway are extremely powerful despite their subtlety. There aren’t many blaring, drama-ridden moments, but rather hushed conversations and communication amidst an eyebrow raise or direct eye contact. Both characters have their own fair share of trauma and deep wounds, physical and psychological. Jennifer Lawrence plays this role in such a beautifully reserved nature and is so transformative that she wholly sells the sense that there is real trauma of a veteran behind her eyes. The far-away stares, micro-expressions, and behaviors of the character are so naturally portrayed by Lawrence that it’s fair to call this one of her most compelling performances to date.

The friendship between Jennifer Lawrence and Brian Tyree Henry is so endearing and utterly convincing as the platonic pair navigate difficult emotions and the days, weeks, and months that come with them. Henry is astounding as James, bringing another level of authenticity to Causeway and acting head to head with Lawrence with absolute ease. His story, as we discover, is just as tragic as Lynsey’s in a sense, as he too carries a thousand-yard stare that speaks volumes. His presence compliments hers as they fill the voids they previously didn’t realize were barren. Their connection is a painfully genuine example of the fact that sometimes in order to heal and process emotions, humans just simply need other humans.

On a technical level, Causeway is quite impressive as it boasts a fantastic visual palette and gorgeous score. Cinematographer Diego García turns the city of New Orleans into its own character. He captures the beauty, destruction, and raw feeling of the city beautifully in a way that is encompassing and prominent. The score from Alex Somers is an underrated achievement as his haunting synth-infused work assists in bringing the emotion and drama of the film to new heights. These elements combined with stellar performances and Lila Neugebauer’s inspired direction make the film a standout in this year’s fall lineup, a small but lovely diamond in the rough if you will.

Causeway doesn’t tie up all its loose ends into a pretty bow. In fact, there are many relationships left yet to mend and many emotions still to be handled. There is a certain uncertainty in the characters’ futures, but that is exactly the point as it closes on a hopeful note, one that gives the notion that these two individuals are going to be alright. Perhaps the road ahead isn’t any easier and they will surely need to lean on each other, however, things will be okay. Causeway leaves us with a reminder of how powerful human interaction can actually be – that kind of kindness, empathy, and understanding are often undervalued today. The film gently prompts its audience to value close relationships and the humans beside them in general, because of what a gift that truly is.