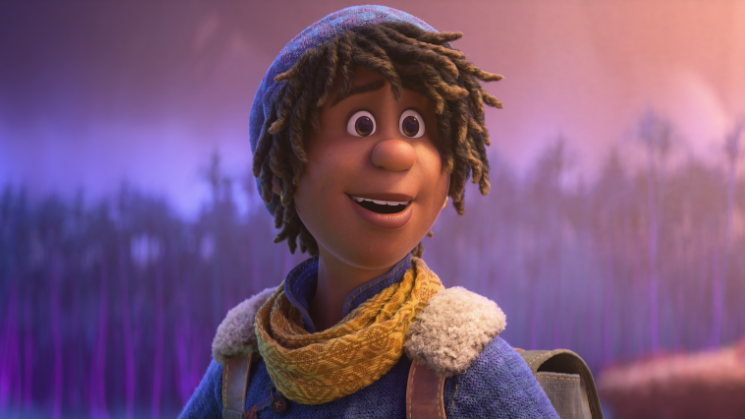 Jaboukie Young-White has been on a nonstop come-up since his first break into comedy in 2016. From viral social media personality to fully-fledged comedian and actor, Jaboukie is now building a name for himself in animation. The 28-year-old star previously lent his vocal talents to the Netflix animated series Big Mouth and Bojack Horseman, the former in which he was also a writer, and was recently just heard as one of the leads in Fairfax on Prime Video. Young-White is looking to end 2022 on a high note by starring in Walt Disney Animation’s Strange World, but this isn’t his first rodeo with Disney.

Some fans might already recognize Jaboukie Young-White’s voice from his small appearances in Ralph Breaks the Internet or Baymax! on Disney+. The comedian may not be new to the Disney family, however, as we learned at an early press day for Strange World, this film sees Jaboukie take on his largest and maybe most important voice acting role so far. Brought to you by director Don Hall and writer Qui Nguyen, who just brought another Oscar home to Disney with Raya and the Last Dragon earlier this year, Strange World follows a family of famed explorers who must learn to overcome their generational differences as they travel into an uncharted, dangerous landscape in order recover resources to save their far-away land of Avalonia.

The Clade family was once led by father Jaeger Clade (Dennis Quaid), an epic adventurer who went missing into the unknown out of the obsession with his own legacy. His son Searcher Clade (Jake Gyllenhaal) has since pivoted the family name towards farming and agriculture on their unique alien planet, as they harvest a special green plant called Pando used to power Avalonia with energy. All may look well for the Clades on the outside, but within their family lies a young spirit waiting to break free, Ethan Clade voiced by Jaboukie Young-White. Out of the guilt and fear that came from losing his own father, Searcher has thrown an extremely protective safety net over his son Ethan, forcing him to live in the shadow of his family legacy.

Learning to Fly (Or Survive)

This father-son dynamic comes to a head when Searcher is contacted by the leader of Avalonia, Callisto Mal (Lucy Lui), to lead a new expidition for more Pando that may be the land’s last hope for survival in the wake of an incoming famine. Ethan tags along without dad’s consent, forcing his mother Meridian (Gabrielle Union) into the mix with their three-legged dog Legend. Amidst all their arguing, the Clades are then mysteriously swept into the Strange World – a subterranean environment where a biological mass of any size and shape can kill you. It’s here that they are reunited with Jaeger Clade, who has now lost touch with reality in full-blown surivial mode, and the three generations of Clade sons must learn how to survive together in a film that Don Hall and Qui Nguyen describe as Journey to the Center of the Earth meets National Lampoon’s Vacation.

The role of Ethan Clade is a pivotal one, acting as a sort of audience surrogate that just wants to make more out of his pre-determined life, and is finally given the chance to do so in a colorful world full of astonishment. As the youngest of the family, Ethan is the most comedic and free-spirited that younger viewers will find no trouble identifying with as he also befirends the family’s strange new gelatinous sidekick Splat. Don Hall was able to share with us why Jaboukie Young-White was the perfect choice to portray Ethan Clade and act as the emotional anchor of the film, as well as how the star made Strange World an easier experience for him to make as a director.

When praising Jaboukie Young-White, Don Hall states that “knowing how skilled he is not only in comedy but also in improvisation, it’s such a good fit for us because of obviously how we work.” What exactly does this mean? The filmmaker explains; “We storyboard multiple versions of the scene – we try to get it the best we can – but when we get down in the recording booth with actors, we love the idea of improvisation.” Jaboukie was said to be an expert in this regard, adding as many extra dialogue and takes as possible when there was enough time to just let the actors loose in the recording sessions. Although, this of course means that just as much was left on the cutting room floor

The Strange World team may have let the comedy star go a little bit too far in the recording booth. According to Don Hall, “there’s a mountain of material” when it comes to Jaboukie’s imrov and that same goes for most of the cast. Having to go through the headache of choosing the best line readings with totally worth it says Don Hall. The reason comes from people taking a long of things for granted in live-action that animation simply can’t; “Those little pauses, little breaths, little stutters, or half starts in a line… all that stuff is animation gold because it really helps the illusion that these characters are real,” the director proclaimed. Jaboukie Young-White was key in bringing this type of authenticity to Strange World, as no one in the film is perhaps as conflicted as Ethan Clade.