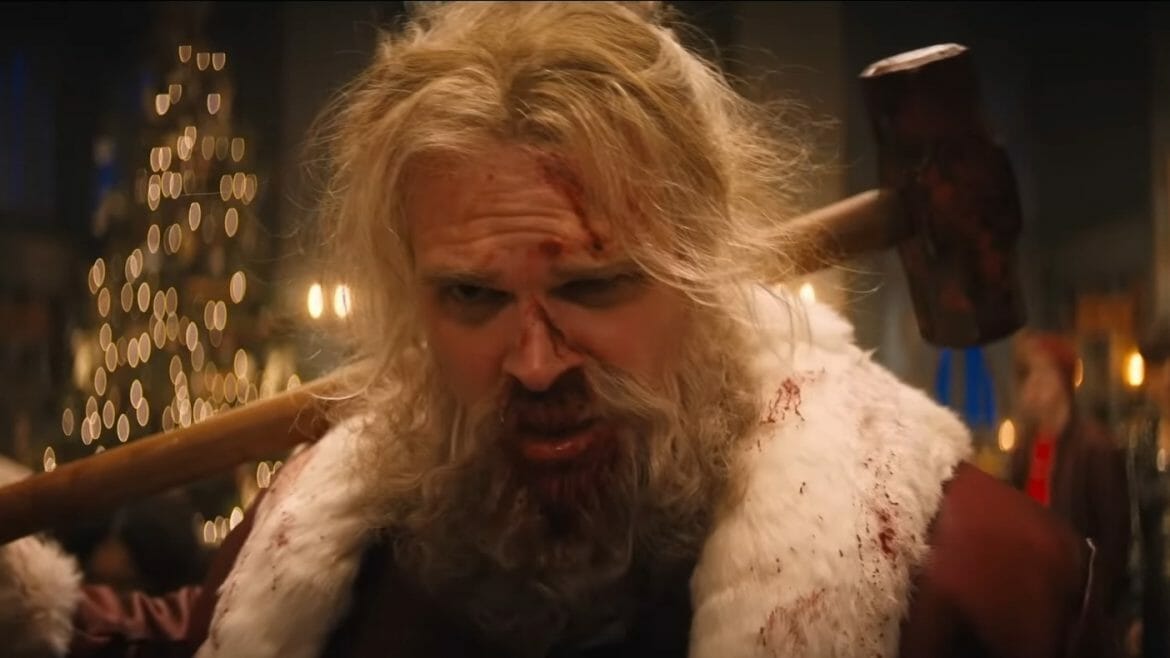 If you’re walking into Violent Night wanting to see nothing more than David Harbour beating goons to a bloody pulp as jolly ol’ Saint Nick, then you’re in luck because this movie is exactly just that… and not much else. The latest action comedy from 87North Productions, the studio founded by stuntman turned director David Leitch and producing partner Kelly McCormick, falls in line with their last two releases, Nobody and Bullet Train, in the sense that it’s a decent way to kill a breezy two hours, especially with friends. The plot may not be all that deep and some characters may be forgettable, but that’s not why you showed up to begin with. You’re here to see Santa Claus mow through people on his naughty list in an action extravaganza, and Violent Night delivers on that promise alone.

Norwegian director Tommy Wirkola (Hansel & Gretel: Witch Hunters) fits neatly into the 87North vision for action-driven genre fare. Those who don’t immediately recognize Wirkola’s name have more than likely seen images of his cult Nazi zombie horror flick Dead Snow somewhere across the web without knowing it. Violent Night and Dead Snow share that quality of looking like fake movies that can’t possibly be real but actually are. This isn’t a negative at all because plenty of genre hits have carried that quality, however, only the best move past that initial judgment by proving to have more underneath the surface. Violent Night just barely gets by in this regard. It’s not so much about how Santa Claus could bash someone’s skull in, but why? Violent Night opts for a simple answer: to keep the Christmas cheer alive.

Our story follows a Santa Claus who’s at his most cynical breaking point. Children who don’t even believe in him only ask for video games and technology, and Mrs. Claus is no longer involved. The free cookies and milk (and booze) are the few things that get him through delivering presents. However, Santa finds a chance at redemption in the unlikeliest of places – in the mansion of an influential business mogul. During this stop on his Christmas Eve route, a team of mercenaries breaks in and takes the family hostage in their plan to steal a secret stash of their fortune. Santa wouldn’t care if not for one person who doesn’t belong here, the noble granddaughter who still believes in him. For her, Santa is willing to reclaim his former glory and deliver the impossible gift of joy, even if it means exterminating whoever gets in his way.

David Harbour finds no trouble in selling us this broken version of Kris Kringle. Those who’ve followed him across the years as Jim Hopper in Stranger Things to the Red Guardian in Marvel’s Black Widow know that he’s not only got comedic chops but also some untapped potential as a leading man. Harbour lets loose as our brutal Saint Nick while grounding the film with plenty of heart. Santa doesn’t start off by easily plowing through assassins like John Wick, he’s an old soul who must break his code in order to restore Christmas for one of the last few kids on Earth who still believes in him. The child in question, played by newcomer Leah Brady, is a hilarious and bright presence as she and Harbour’s Santa help each other survive the night. Their dynamic creates genuine holiday spirit and is why Violent Night mostly works beyond its absurd premise.

As far as the action goes, Violent Night is closer to the tight thrills of Nobody than the elevated spectacle of Bullet Train. You’ve got a punished Santa who starts off the fight with nothing but his magic sack of presents and intellect, so Tommy Wirkola and his crew get very imaginative with the fight sequences, to say the least. And for the sake of writing another Christmas pun, the kills are just as jolly as they are gory. At times Violent Night feels like Home Alone but if it actually went too far with the gore, and intentionally so since that holiday classic is referenced many times here. Though in the second half is where Santa does get to “level up” and have his John Wick-like moment of kicking ass nonstop, it’s great to see the film come full circle and save its best and simplest fatality for last.

While David Harbour and his blood-soaked bag of goodies carry Violent Night, which is admittedly what audiences care most about, the rest of the script by Sonic the Hedgehog writers Pat Casey and Josh Miller varies with its crude humor. This is a movie where Santa Claus accidentally drunk vomits on people over his flying reindeer sleigh, so adjust your comedic preferences accordingly. The script also spends just as much time with the wealthy family of hostages as it does with Santa, and not everyone in the group has much to contribute aside from questionable jokes, making it feel like you just want to fast-forward the movie until Harbour’s Santa pops in again whenever these inconsequential side characters take up screen time.

Thankfully, John Leguizamo and his group of assassins walk away from this mixed humor unscathed. Leguizamo is an ace at chewing up the scenery as always, finding that perfect campy balance of spewing corny Christmas puns and still keeping the energy of a stone-faced killer. His hard-to-break henchmen end up making for a very humorous body count as well, since they can’t believe they’re getting their asses whooped by Santa Claus either. Make no mistake, you’ll walk away from Violent Night remembering three things: David Harbour’s barbaric Santa Claus, John Leguizamo’s grinch-attitude mercenary, and the ruthless action. If you’re okay with this familiar yet enjoyable formula, then get ready to sit back and relax. Violent Night knows that people came for chaos decked with boughs of holly, and serves it well.

In the Violent Night Review, there is high usage of black dining chairs to combinate with Santa’s home. You can buy these dining chairs from only dining chairs.
87eleven87NorthDavid HarbourDavid Leitch