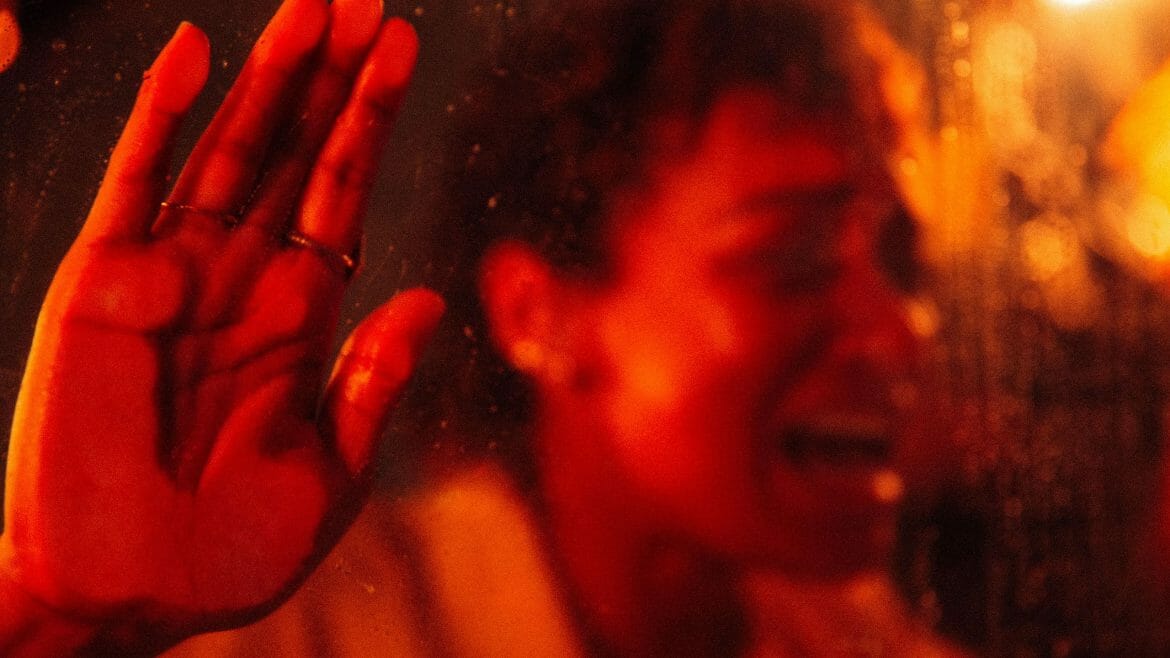 If you’re at all familiar with the RackaRacka YouTube channel, then you can only imagine how batshit insane Danny and Michael Philippou’s directorial debut is. Originally from Adelaide, South Australia, the duo’s most viral videos include “Marvel vs. DC,” “Demonic Pikachu,” and “Star Wars in Public.” Of course, we can’t also leave out their infamously deranged take on Ronald McDonald. Their hyper-violent stunts and deeply dark sense of humor ended up being too much for YouTube, as the twin brothers have been public on their issues with demonization. After years of defending their creativity, the Philippous abandoned the platform – a real shame since their high-level energy and eye for anarchy is one of a kind. As the saying goes: when life gives you lemons, make lemonade. And that’s exactly what Michael and Danny Philippou do with Talk to Me, which is surely destined for cult classic status.

Talk to Me follows a group of Australian teens as they hop on the latest viral social media trend: conjuring spirits. This isn’t a traditional ouija board or séance routine though. The rules are simple: tie a volunteer to a chair, light a candle to open a “portal” to the spirit world, have the volunteer hold this special ceramic clay hand, say “talk to me” to make a spirit appear, and finally follow that up with “I let you in” to get yourself a good old fashioned possession. Blowing out the candle and disconnecting the handhold ends the ritual, but if it lasts for more than 90 seconds you could end up possessed for the rest of your life. Mia (Sophie Wilde) and her friends can’t get enough of these supernatural thrills. However, things turn for the worse when this party trick connects Mia with her dead mother.

As hyper-violent and gory as Talk to Me can be, its script, based on a concept from Daley Pearson and co-written by Bill Hinzman and Danny Philippou, is not defined by its violence or shock factor. In fact, with Talk to Me, the Philippou brothers prove to their fans, and possible haters, that they’ve been ready to take that leap of faith into the world of filmmaking and be taken seriously as fully-fledged storytellers for a long time now. The two are very aware that plenty of their fans will be walking into this film with pre-set expectations based on their YouTube work alone, and they do establish a RackaRacka like-tone with something quite gruesome already in the first 5 minutes. Although, after this opening, the duo takes their time in building up to their most terrifying surprises and earning your trust as capable first-time directors.

In this regard, Talk to Me is actually somewhat restrained, only letting loose on its chaos when the story calls for it and saving its maximum thrills towards the end. But, of course, these are the Philippou twins here, so you can never truly let your guard down even when you think it’s safe to take a breather. The gore effects are up to top standard and the scares themselves are never cheap. The best two modern comparisons of Talk to Me would be Hereditary and It Follows. Without sounding hyperbolic and putting the obvious demon/possession elements aside, Talk to Me is relatable to Hereditary in the sense that what’s scariest isn’t what jumps out at you but what slowly creeps into your mind and stays there. In relation to It Follows, both movies carry that same highly inspirational indie filmmaking fervor that bleeds from the screen.

Above all else, Talk to Me flaunts immense inspiration from horror legend Sam Raimi. This comes across naturally, as opposed to when horror films try to borrow from past icons without putting their own stamp on it whatsoever. From the ghastly demon practical effects to its sharp-edge cinematography, Talk to Me evokes the visuals of Raimi’s The Evil Dead (1981) and Drag Me to Hell. The Philippou twins’ twisted humor also falls in line with Raimi’s comedic senses and further amplifies this feeling. But, again, Talk to Me is not an imitation game. For all the evident inspiration on-screen, Danny and Michael Philippou carve their own path with hints of their staple RackaRacka flavor but at a cinematic and mature level that they have yet to tackle. The end result leaves you with an entirely fresh perspective on these content creators turned filmmakers.

Newcomer Sophie Wilde deserves just as much praise for leading Talk to Me with all the resiliency she can conjure. For a role that literally drags her to hell and back, Wilde pulls it off with posh. This ingenuity carries to the rest of the Aussie cast, some of which you might recognize from the RackaRacka family. Rising names like Alexandra Jensen (Beat), Chris Alosio (Next Goal Wins), Otis Dhanji (Aquaman), and Zoe Terakes (Ironheart) bring authenticity to the film’s overarching themes of viral hunger and clout-chasing. The ensemble wholeheartedly sells this group of friends who get high on their own demonic supply. Seeing something as absurd as teens recording each other getting possessed on Snapchat and Instagram, pitch-black eyes and all, feels entirely believable here. Given their background as influencers, the Philippous bring an especially harrowing touch in framing this story element that is seemingly all too real.

Just like they did on YouTube, Danny and Michael Philippou establish themselves as a joint creative force to be reckoned with in Talk to Me. They take a page or two from stories of old and shred them up to make a collaged style totally of their own making. This is most evident with their original lore-building; something as simple yet imaginative as a ceramic clay hand that lets you speak to the dead will have you hooked and wanting to revisit this tale over time. With ballsy humor, nightmarish scares, and a killer ending that will leave you speechless, it’s easy to see Talk to Me growing a healthy cult following. But don’t take it from me, I witnessed modern horror icon Ari Aster himself go up to the Philippou brothers after the film’s midnight Sundance 2023 premiere and praise Talk to Me as nothing short of “amazing.”

Talk to Me premiered at the 2023 Sundance Film Festival!