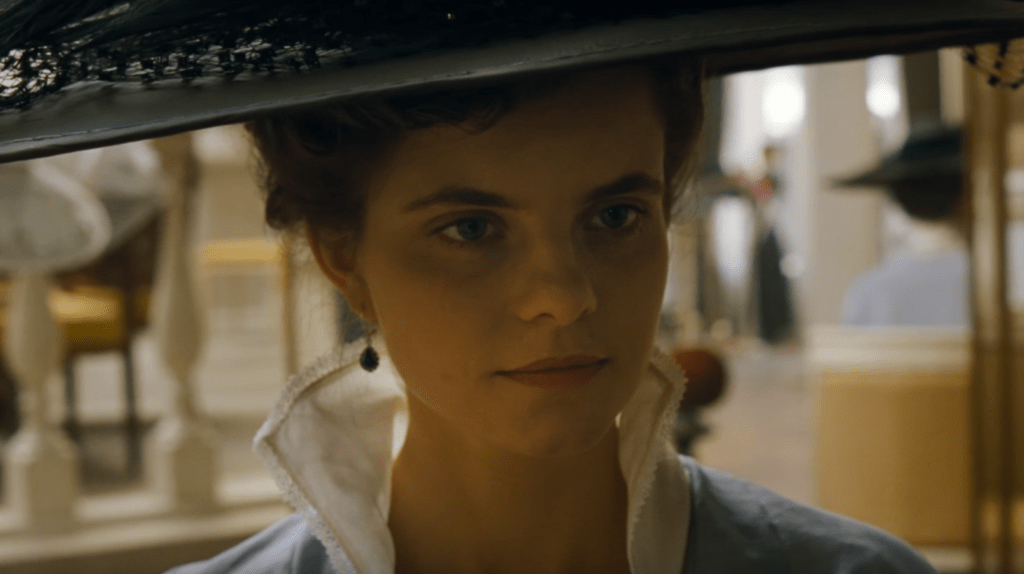 Sunset tells the story of Írisz Leiter (Juli Jakab), an orphan who returns to her residence in Budapest, we first meet her in a hat shop once owned by her long-lost parents and she is not greeted whole heartedly at all. The name ‘Leiter’ is something of a curse, that when uttered only breeds trouble.

Directed by László Nemes, who’s last film ‘Son of Saul’ won best foreign film at the Oscars. This return is a triumph, the film tells the tale through a first person perspective with Írisz playing a non-conventional detective as she wades through mystery after mystery, digging up details leading towards her long-lost-brother. Oszkár Brill (Vlad Ivanov), the man in charge of her family’s hat business takes in Írisz and remains a presence throughout.

The film demands full focus from the spectator, as the use of close ups and tracking shots are extensive and incredibly intense. The use of focus is crucial in creating this very personal connection to Írisz as we frequently track from behind with a handheld camera. The best word to describe the film is visceral, it starts off at a rather slow pace yet as the film picks up the editing becomes quicker – however Nemes doesn’t hesitate to linger and not cut straight away, this creates a deeper sense of reality as he pans between characters and does not fall hostage to shot-reverse-shot. Characters walk in and out of the frame, a technique that adds as a way to heighten the inherent intensity of every situation.

The film captures violence and the cruelties of the masculine in such a savage way, it feels as if they are crawling upon you, like they do to Írisz. The sound design plays a crucial part in the build up to scenes like this, as the use of heavy breathing creates an ongoing atmosphere of intensity. The film is told through Írisz’s perspective and this connection we feel to her is truly shown in those animalistic scenes, that have been created in such a grossly beautiful way.

Mátyás Erdély’s cinematography is one element of why this film works so well, it sucks us into a confined perspective – using frequent long-takes, shot on 35mm film and is backed by the incredible set design which in collaboration with the camera creates a world so real you could touch it. The film is utterly beautiful, with its intricately crafted colour palette and costume designs, it is able to create a feeling of nostalgia and warmth that is a feast for the eyes.

The idea of spectatorship is tested, as the film takes place over a matter of days. Our involvement is shown every time Írisz walks through the horrifying violence of pre-war Budapest. We are forced to actively engage routed in her innocence, symbolised through her choice of clothing. The innocence is conveyed beautifully through Jakab’s subtle and pure face – She does not say much, but expresses an entire world of information and emotion through her eyes.

Sunset is full of enigmas and the Írisz’s ending is a riddle, the path Írisz ventures down is one of mystery and darkness – nothing is explicitly said, but the use of symbolism is what hints at what really happens. A certain line near the end of the film hints at a greater idea, something more psychological that darkness hides behind things so bright and beautiful, but inside a pit of growing darkness emerges. A change in clothing is all that is needed.

The grander metaphor shown in the mysteriously shocking last shot of the film will leave your mind swirling, it’s as if she had become someone entirely different – this ambiguous end has something of a feel like ‘The Shining’, a fantastically fascinating end to a masterful film. The beauty of the way Írisz’s story is told is of intricacy that has been extremely well thought out and you begin to see the turns, as she begins to embody what she once opposed near the end.

The film portrays darkness and beauty behind each veil lifted, the ambiguous nature of the narrative reels you in as you begin to create a picture of what the greater metaphors and symbolism truly embody. Nemes’s ‘Sunset’ never holds back and uncovers the evils of Budapest’s society in a glorious way.