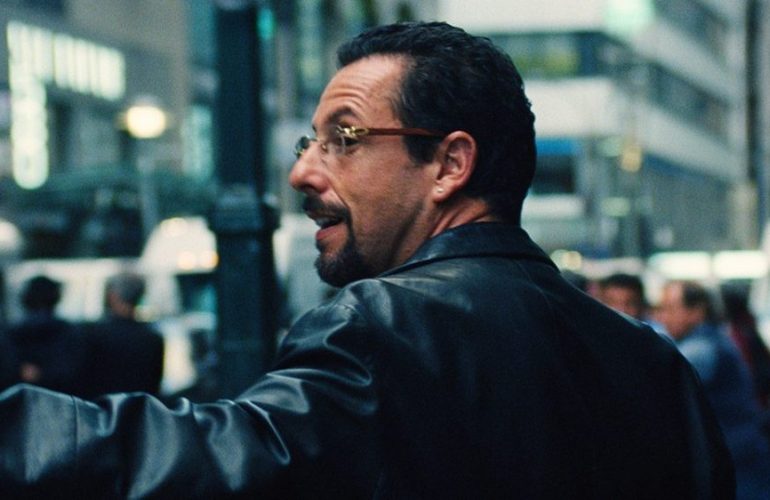 The closest example of such a film that is as big of a complete mess as this is that of last year’s Sorry to Bother You, that’s my closest comparison to the utterly incoherent mess that is this soulless and artificial Scorsese rip.

Cashing in on a the New York setting, Uncut Gems takes the constant-talking archetype to another level, but not an elevated one. In fact, it comes across as a poorly directed attempt to create deeper psychological meaning in the constant harassment and struggle of one man’s life, yet it’s all hollow and completely flat-lines in trying to build tension through the non-stop chatter and noise.

Howard Ratner (Adam Sandler) is the owner of a showroom, based in the Diamond District in Manhatten, New York City. He is a gambler, a gambler like no other and this has an impact on his hectic New York life. A matter of multiple gambling schemes get Howard into trouble, he makes somewhat treacherous moves in betraying trust to earn for himself. Recently he came into knowing of a gem, a black opal. From an Ethiopian mine, of which he wishes to gain a truck load of money from.

Coming off of the success of Good Time, the Safdie brothers have delivered an absolute incoherent mess of a film. A film that made me consider getting up and leaving, due to the incomprehensible chopped-up nature of the edit. Some may say it’s for the purpose of tension, the constant bickering and noises, yet I never felt an ounce of tension. All that was felt was a hollow sludge pile of something trying to create meaning and a message under the guise of chaos, but it never works.

There are a few funny lines scattered throughout, that’s about all that works – Sandler is one-note and almost sketch-like. All he does is stumble around, talking non-stop and he never stops, he is a protagonist of no depth and is merely all surface layer. It’s a masculine-fueled macho ride of nothingness, adding to the terrible filmmaking craft on display is the sexualised view of its female characters. They are capitalised upon as objects and are nothing more than things to desire, there is no underlying message or meaning in subtext in the way they are viewed, if they intended anything they sure did fail.

Uncut Gems is an utterly incoherent mess, it’s one of the worst films I’ve seen in a long time. It tries to be tense, but fails due to the hollow nature of the film’s execution.

Despite being head editor, Ben loves to review films, ranging from indies to blockbusters, at DiscussingFilm. He loves musicals, horror, and indies among a broad range of other genres. His taste is wide ranging, shown by his favourites of 2018; Suspiria, Leave No Trace, and Mary Poppins Returns. In his spare time, Ben’s watching DC TV shows and going on about Melissa Benoist, Chris Wood, and Grant Gustin. Follow him here: @thedctvshow View all posts by Ben Rolph