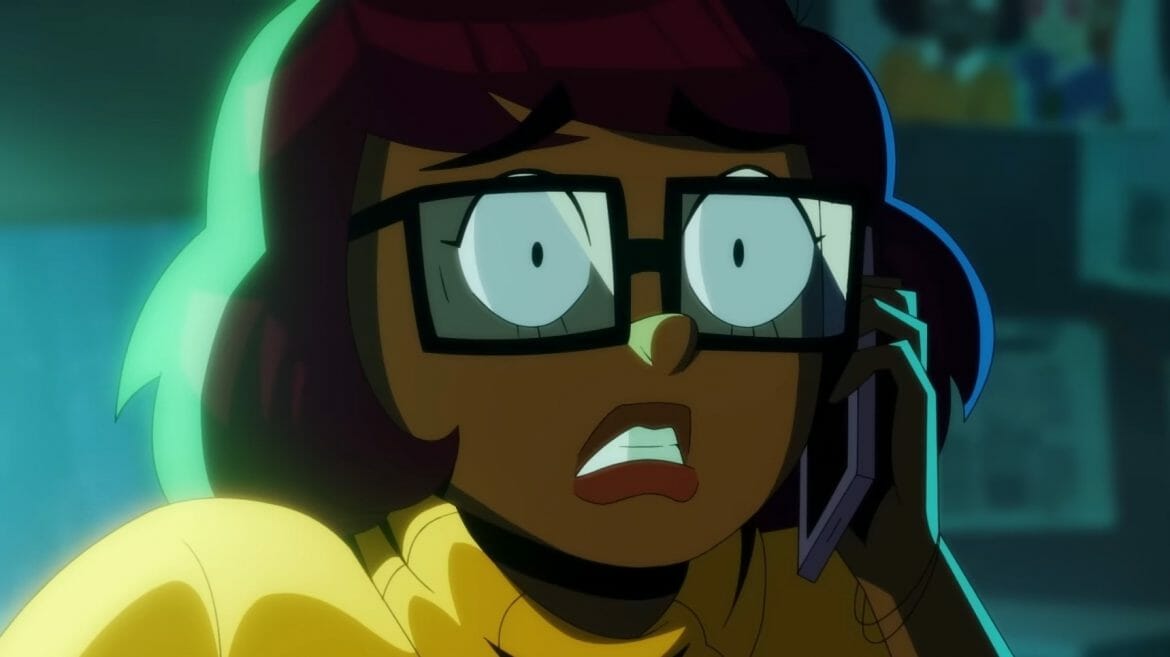 Everyone knows Scooby-Doo. A childhood staple since 1969, the Hanna-Barbera cartoon featuring a gang of mystery-solving friends (and their dog) is nothing less than iconic. No one asked for an adult animated origin story from the perspective of the dorky one, Velma. And yet, Velma is coming to HBO Max. The animated prequel series is comprised of an extensive list of accomplished comedic actors such as Mindy Kaling, Sam Richardson, Constance Wu, Glenn Howerton, Russell Peters, Melissa Fumero, Nicole Byer, Stephen Root, Wanda Sykes, and Jane Lynch. With a line-up like that, it’s difficult to imagine that it’ll fail. And sure enough, Velma doesn’t sink but swims.

Velma is about Scooby-Doo in the same way The CW’s Riverdale is about Archie Comics. That is to say, this HBO Max original series takes the vague outline of Scooby-Doo characters and dumps them in an absurd high school setting. All of the main cast only resemble their classic Hanna-Barbera counterparts vaguely, far enough that Sam Richardon’s Shaggy mainly goes by his real name Norville Rogers at this point. Their character virtues and vices don’t strictly align with the source material but are compelling additions that don’t stray too far from plausibility. Interestingly, they all are caught in a “love quadrangle” with all the messy confusion of teen sexuality involved.

The HBO Max original follows a young Velma Dinkley, voiced by Mindy Kaling who also executive produces, as she already has a talent for solving mysteries in the days before Mystery Incorporated but is severely impeded by a mental block that keeps her from doing so after the disappearance of her mother. She’s forced to brush up on her skills after she becomes a suspect in a local murder. Then, not only must she find the real killer, but also challenge herself to resume the search for her mother.

Velma combines the idea of a detective with a teenage girl in a great way. What some would call deductive reasoning, others may say is being judgemental, and teen girls are often far too judgemental. While many depictions of judgemental teenage girls come from the stereotype of the popular queen bee using callous and snap judgments to weaponize her sphere of influence, Velma plays with that very idea. Velma herself is cold and judgemental, yet she’s far from popular or interested in reinforcing the status quo. Rather, she wants to dismantle it, and heavily judges anyone who she sees as supporting that status quo.

This animated series is very aware of both gender and race, and much of its comedy comes from that awareness. The writing in Velma is sharp and curt, relying more on cultural awareness than anything else. There is enough traditional adult-oriented comedy relying on the characters being cringe or crass to keep audiences captivated, however, the jokes poking fun at the show itself through a feminist lens is where it is at its funniest.

The core cast of HBO Max’s Velma, Constance Wu as Daphne Blake and Glenn Howerton as Fred Jones included, is fantastic. Howerton’s hilarious take on Fred is a notable standout. There is a concerning trend for animated shows to rely on celebrity casting rather than hiring voice actors, but at least here, the final product doesn’t suffer for it. The comedic timing and delivery are on point, and it makes sense why they would focus on hiring comedians. Unfortunately, though, sometimes the immersion is broken when too much of the actor’s voice is recognizable and obvious.

Animation is a good medium for Velma on HBO Max, as it allows for better hyperbole. However, the show’s animation isn’t imaginative or utilized to its full capabilities, it’s justified by playing up the comedy or lending a sense of brightness that would’ve been lacking in live-action. It also allows for gruesomeness and other adult content that would otherwise turn some viewers away.

The pacing of Velma is tight. The episodes are just half an hour long, and even though there are season-long arcs, the series leans episodic with a new conflict introduced and resolved by the end of each episode. Whereas this might run the risk of muddying the plot, the central conflict of Velma is reiterated and reinforced in every episode and the events tie back to it. This leads to very snappy and fast-moving TV with little room for drag. Each episode feels both fresh and relevant. It allows for more dynamic writing, with tight interior episodes to work on smaller complete lessons the characters must learn, while still focusing on an overarching issue. At the same time, the audience slowly learns the clues they need to solve the murder mystery.

Velma, surprisingly or not, is a good addition to the Scooby-Doo franchise. More importantly than anything else, it’s funny. There are two mysteries that need solving in this first season, and the show manages to keep an excellent pace when getting to the bottom of them. It’s not the sort of mystery that leads to a lot of audience theorizing, but an enjoyable one nevertheless. Having only seen the first 8 out of 10 episodes, there is strong excitement to see how HBO Max’s Velma ends.

By now everyone knows journalism is a joke based on sucking up someone or stirring drama instead of objectivity, and journalists think if they ignore it maybe people will forget how much of a joke journalism is.

Do you want to know what reception ‘Velma’ actually has? go to the Youtube trailers, the like to dislike ratio is literally 1 to 20, don’t bother looking at the comments tho they have been disabled.

Were you drunk or something when you wrote this review? This shows is probably the worst thing I have ever watched.

“It’s a success..”
I think you may need to actually watch the show. It’s just awful.

How much did they pay you to make a fool of yourself trying to convince readers this garbage is at all watchable?

It’s literally sitting with the titanic and that old bag’s blue diamond.

omfg these comments are a perfect example of people who cant stand change. Yes, this show is pretty far away from what the original was, but this isn’t a kids show, its an adult show, so you can’t expect it to be the exact same. And, Mindy Kaling did put a bit of herself into Velma, and had her views in the show. But that doesn’t necessarily make it a bad show. Just please stop making so much fun of it. It makes the people who actually like it and watch it feel like they’re doing something wrong, even though they aren’t. Just go watch another show instead of trying to crap on Velma every chance you get.