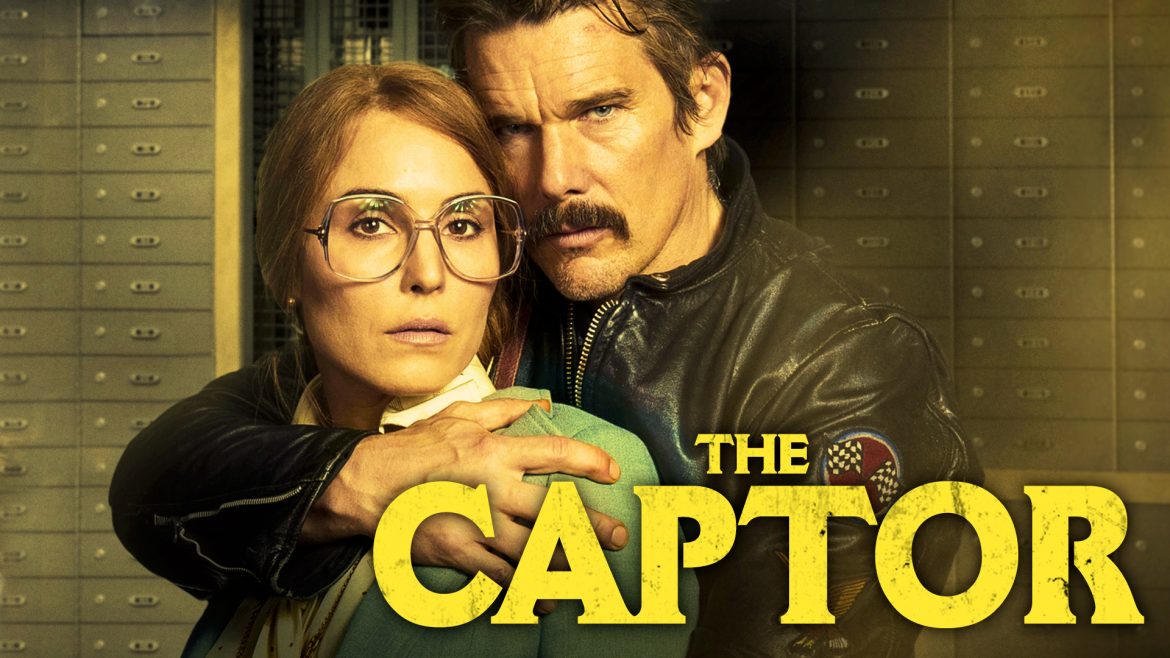 Ethan Hawke returns to the big screen with a sure-fire bang. After a great 2018 with Hawke garnering acclaim off of his performance in Paul Schrader’s First Reformed. His latest, The Captor is an intriguing dark comedy laced with infectious energy. It is uniquely stylish and Hawke gives one of 2019’s best performances so far.

Stockholm Syndrome is a strange phenomenon, where in a hostage situation, a victim will start to feel and sympathise for their captors and identify with them. They form a  psychological alliance as a survival technique, but becomes twisted as the hostages refuse to cooperate with police and develop positive feelings towards their captors.

It’s 1973, set in Stockholm as we follow American-born outlaw Lars Nystrom (Ethan Hawke), wearing a wig, sunglasses and a cowboy hat, walks into a bank, shoots, cranks up the radio and takes his hostages. He takes two women hostage and demands the release of his friend (Mark Strong) from prison, a lot of American money and a Mustang that Steve McQueen used in ‘Bullet’. A hostage, Bianca (Noomi Rapace), becomes sympathetic to her erratic captor. Bianca finds herself siding with criminal over cops, as negotiations continue.

Based on the ‘absurd’ but true story, The Captor (also known as Stockholm) is beautifully and sleekly executed. Director Robert Budreau brings together a pitch-perfect cast, directing a film with such vibrance and charming absurdity that relates to ‘Reservoir Dogs’, in that it’s predominantly all set in a set location. It is beautifully executed with its authentic 1970’s aesthetic in set design and cinematography. Nothing is over-shadowed with silly camera choices, as Budreau allows his actors to truly act.

Ethan Hawke’s performance is brilliantly erratic, with his ability to shift between moments of charm, humour and fear shining. He truly gets lost in Lars, like his unpredictability, we as the spectator are left falling for this charming robber? We are placed into the perspective of those who suffer stockholm syndrome, aligning ourselves with the criminals simultaneously as Bianca does. Following Hawke, Noomi Rapace is ace perfect as the hostage who falls under the spell of her captor, she is innocently charming in all of her curiosity. Mark Strong’s performance is an excellent presence, bouncing back and forth with Hawke in impeccable measure.

It’s a heist film, but completely different and actually rather revolutionary, as the fear comes little from the real criminals, but from outside forces. The visuals are striking, with a toned down vintage-feel that blends well with its strong sense of the abnormal. Adding to the period piece feel is the choice of using some Bob Dylan songs, most strikingly in the opening 5 minutes – it helps set the feel, it all lines up perfectly.

This film documents one of the oddest occasions ever, which in turn sparked the term “Stockholm Syndrome”, the alignment and affection for ones captor. I absolutely adored The Captor. Ethan Hawke gives a masterfully agile performance in black comedy, backed by the wonderful Noomi Rapace. It is energetically fresh take on the heist film.