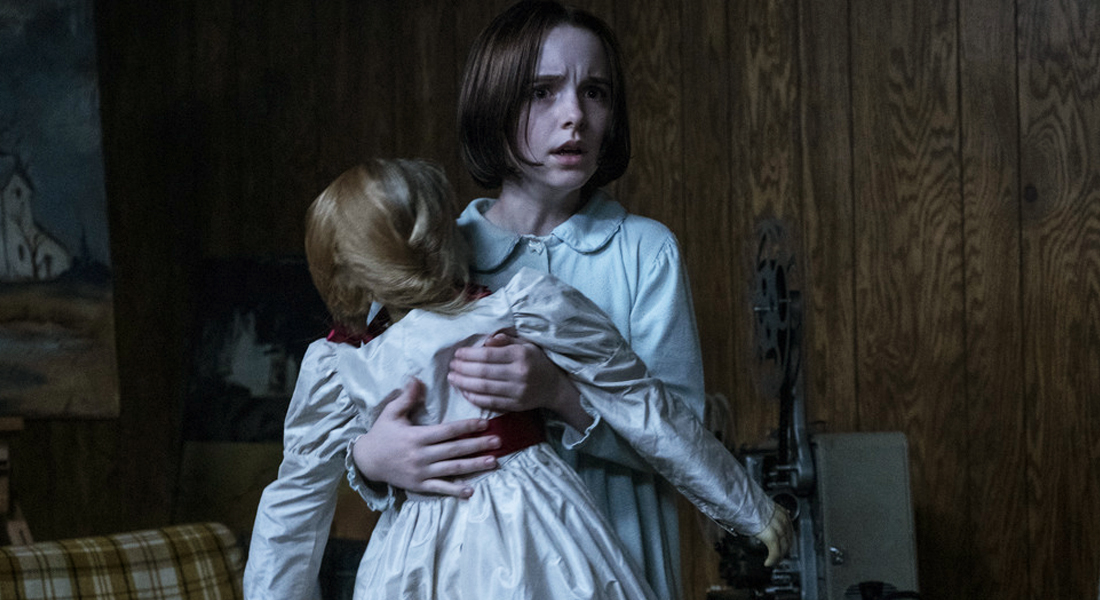 Annabelle has had two films prior, Comes Home marks the third outing of the now-iconic-doll. This film is terrifying, sweat will seep through the paws of your skin and shoot right out from scare to scare. Not only is it an effective horror, but a very well-made film that is crafted to build tension and suspense and it really works.

When its at its highest points of horror, it goes relentless. I found myself shouting in fear over one specific veiled-woman. This installment of the Conjuring universe comes from regular-screenwriter Gary Dauberman, who crafts a house of horrors that is unlike any of the Annabelle films prior.

We begin in a prelude of sorts, after The Conjuring’s early scenes Annabelle is no where to be seen. She’s been taken by the Warrens, who has her placed in a locked-case in their very-much-so-haunted artifact room. One year later, the Warrens are called away on business and their daughter, Judy (Mckenna Grace) is left in the care of Mary Ellen (Madison Iseman). Daniela (Katie Sarife), a friend of Mary Ellen has an agenda, this agenda leads to the releasing of Annabelle. All hell breaks loose, literally.

The film taps into expansive fears of human nature, with Annabelle being a conduit for the haunted manifestations, everything has a different feel and touch in terms of the manifestation of each individual horror. On the contrary to popular opinion, this film is one of The Conjuring’s most terrifying films. It’s a relentless horror ride full of thrills, chills and moments to scream aloud.

Gary Dauberman’s advancement from screenwriter to director is smooth, with an obvious teaching from Conjuring master, James Wan, he is able to build ongoing tension with ace control. There is a ever-present sense of dread, built with the various atmospheric techniques, including the heavy use of foreboding smoke. It’s as if at any moment you could be stricken with horror.

The addition of music is very welcome, this nicely parallels to the very specific time-period the film is set, the late 1960’s. This also can be seen in the colourful costume design, the colours are vivid and neatly contrast from the dreary horror that sets in. The fun of the 60’s is seen in the ever-alive performances of Mckenna Grace, Madison Iseman and Katie Sarife. Mckenna Grace is a name that we’ve all heard of and finally this film truly shines a light on the brilliance of the 13 year old actress, as she leads her first film.

There is a sense of innocence and childish naivety that amps up the horror, with these inexperienced non-demonologists facing a demon of no match. Annabelle’s presence is horrifying as usual, with even the slightest movement fear shudders within the spectator, or just the sight of her.

Annabelle Comes Home is a neat horror, tension is built through the creation of atmosphere and effective jump scares. Gary Dauberman has successfully crafted one of the scariest entries in The Conjuring universe, with a clear standout performance of the 13 year old, Mckenna Grace.

ANNABELLE COMES HOME IS OUT IN UK & US CINEMAS NOW