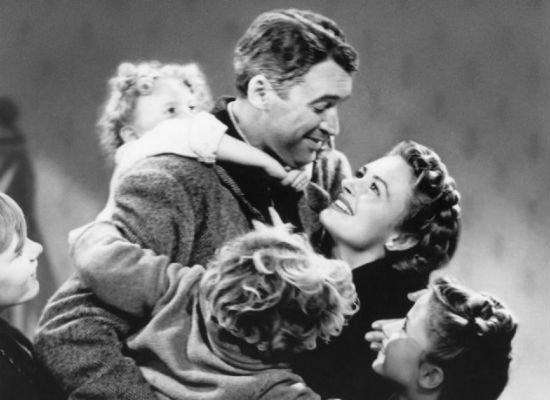 Frank Capra’s entrancing masterpiece, It’s a Wonderful Life has been embraced generation after generation as a holiday classic. Not many films bring joy and tears to families and avid-film-watchers worldwide like this one does. Now being released in restored and remastered Blu-ray form, you can watch Capra’s century defining masterpiece like never before. Restored using original film negatives and a higher dynamic range, the timeless classic is as exuberant and refreshing as ever.

Starring one of time’s finest actors, James Stewart, in a role suitably molded to his ever-reaching talents. It is without a doubt one of the best pieces of acting ever put on screen. Stewart is able to dig deep into George Bailey’s swaying psychology, Stewart himself is nowhere to be seen. Aiding him is a fantastic ensemble of actors, but most certainly the wondrous Donna Reed. If Stewart is the soul of the film, Reed is the heart- always churning excellence into her presence that balances the sometimes darkened mood of Bailey’s unfortunate fate.

George Bailey (Stewart) is a resident in the town of Bedford Falls. Born and raised in the town, George is forced to set aside his dreams of traveling the world upon unfortunate circumstances. Having to keep the family business going, he takes over his father’s small community bank. Thus leading him to protect the people of his town from the nasty Mr. Potter (Lionel Barrymore) in the end. Upon a grand mistake, George is pushed into a state of depression and despair, everything seems direly bad. Until a surprise visit from the angel Clarence (Henry Travers). He shows George the wonders of life and how being a good man effects others.

Bedford Falls is an upbeat community of townspeople, it is almost dream-like in its fictional illusion of joy. Coming out a year after the war, 1946 was a time of recovery. Wrestling of right and wrong is seen within Capra’s film, notably, he and Stewart had both just returned from fighting in Europe. A clear ideology is implemented into the morals at the surface and deeper underlying notions of religion, sin, and community. What all this means is a matter of interpretation, but Capra clearly has a comment to be said on the morals of the world in 1946.

Shot on glorious black and white film, Capra’s use of light and darkness in its cinematography conveys a perfectly harmonious aesthetic look. A look that is unforgettable and sincerely beautiful. It’s a Wonderful Life has a fine mesh of mood and tone – its heart-warming, dark, comedic and joyful. This balance is a testament to the mastery of reality within the script penned by Capra, Frances Goodrich, and Albert Hackett. A dialogue is created that is so bound in realism, yet additionally, a tad of theatrics create a heightened sense of drama and comedy. It’s both seriously funny and heart-wrenching. Finally, most importantly, it is seriously wonderful and awe-inspiring.

Frank Capra’s century-defining masterpiece is a treasure of Classical Hollywood cinema. James Stewart and Donna Reed aid to bring life to Capra’s wondrous world of the mystic, the dire, and the angelic. You do not need many more reasons to experience the restored and remastered version yourself. It fits perfectly well on the shelf of any moviegoer and comes right in time for the holidays.