Top 10 Best Performances of the Decade 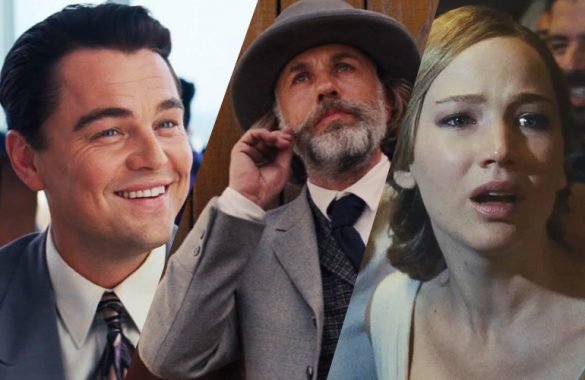 The past decade was littered with absolutely fantastic performances. However, this is a top 10 list and therefore there will be a lot of worthy performances that miss out. These performances have stuck with me and are part of the DNA of when I look back at the films of the 2010’s. These actors deserve the recognition of being on a list of the very best performances of the decade.

To have a varying list I have limited the actors down to two picks of their best performances in roles over the last decade, e.g. Leonardo DiCaprio being an honourable mention as well as a main pick.

One of the last stars of cinema, DiCaprio has defied and beat everyone in terms of acting range this decade. In Tarantino’s Django Unchained, DiCaprio is lost in one of the decade’s most vile and decrepit antagonists, it’s a role unlike anything he’s ever done. There is a poetry to his mustache-twirling performance and his oh-so-perfect line delivery. What DiCaprio does so well is, there is a constant intrigue and yet, you hate Candie so much (he’s horrifically inhumane and animalistic). Keeping in the line of crazy, we have The Wolf of Wall Street. It is DiCaprio’s finest performance yet, he is brilliantly outlandish and note-perfect in the embodying of the rich and crazed. In conclusion, there are far too many performances to be put on one list for DiCaprio, which is evidence to back up my belief that he is by far the best actor working today.

Utterly absorbed and somewhat otherworldly, Jennifer Lawrence’s performance in mother! is a feat of a master actor. The sheer level of intensity that Lawrence reaches is incredible. HOW? How is it possible to go that far? Well, Lawrence goes there and it left me speechless. Aronofsky’s camera follows Lawrence insistently, therefore, she has the impossible task of being constantly watched upon and it’s all in her expressions (especially her eyes) that conveys so much.

Undoubtedly the best performance of 2018, Thomasin McKenzie had an impact on me unlike any other on this list. It was such a nice surprise to knowingly realise I’d just seen a star-in-the-making and now she has gone on to be in more high-profile films this year. McKenzie’s performance is full of subtly and naturalism, it’s all in the wide-eyes of McKenzie’s expressions that says so much. I could watch Debra Granik’s flawless film over and over for all its brilliant features, but Thomasin McKenzie is surely the most essential element. So much is felt through McKenzie; pain, excitement and compassion.

Now Tarantino’s two-time Oscar-winning collaborator, Waltz plays bounty hunter Dr King Shultz. Shultz is charming, rapturous and precious. Christoph Waltz like many of his co-stars, brings an edge of poetry to Tarantino’s deliciously-written monologues. The collaboration between Tarantino and Waltz is an example of an ever-cultivating relationship between filmmaker and actor that works like a radiant charm.

Like his co-star Leonardo DiCaprio, Samuel L Jackson continues to be a endless force of nature. One of the best actors to ever live. Django Unchained sees Jackson as Stephen, perhaps the most horribly racist antagonist to ever ‘grace’ the screen? Written as a bubbling cauldron of hatred, what Jackson taps into is explosively operatic, hilarious and a joyous watch. He chews up every moment. 2015’s The Hateful Eight is an underrated masterpiece, which sees Jackson as Major Marquis Warren. This time he’s the bounty hunter and by god, is he glorious. Glorious in all his qualities, everything is told through his glistening eyes and fantastic Shakespearean-like delivery. Jackson’s performances in both films are a romp of an experience to watch.

Look past Damien Chazelle’s beautifully vibrant direction and the obviously brilliant musical scenes, and you find yourself looking at Emma Stone’s (and Ryan Gosling) performance. Full with the deepest depths of emotion, whether it be; sorrow, love or happiness, it’s all exuded through her eloquenty vibrant eyes.

Lady Bird is simply lovely and it’s no doubt Saoirse Ronan’s career-defining role thus far. Ronan characterises Lady Bird as an endlessly likeable teenager on the verge of self-discovery. I don’t think I’ve related to a character as much as Ronan’s role in Greta Gerwig’s perfectly joyous film. With both Lady Bird and Little Women, I think I’ve cracked down what makes Ronan so perfectly unique as a performer… It’s in the body language. There is something so naturalistic and genuine, she is a jewel of a actor, perhaps the best of her generation?

Sincerely, the infatuation felt for Bejo’s role as Peppy is wondrously colourful and dissimilar to any other film performance of the decade. The Artist is a silent film, it holds an ever-lasting mystery that lingers and creates meaning through the inventiveness that is relied on both actors’ performances. Bejo brings a mythical power to the film.

Paul Schrader’s unbelievably powerful film sees Ethan Hawke at his very best. Played with uncompromising faith, Hawke’s performance is a lacerating job in seriousness and conviction. It’s an incredible feat in psychological clearance and clarity, an enlightened Hawke plays Toller to the very depths. Hawke is unflinchingly committed and it shows, there is a passion that exudes onto and effects the spectator. He’s truly brilliant.