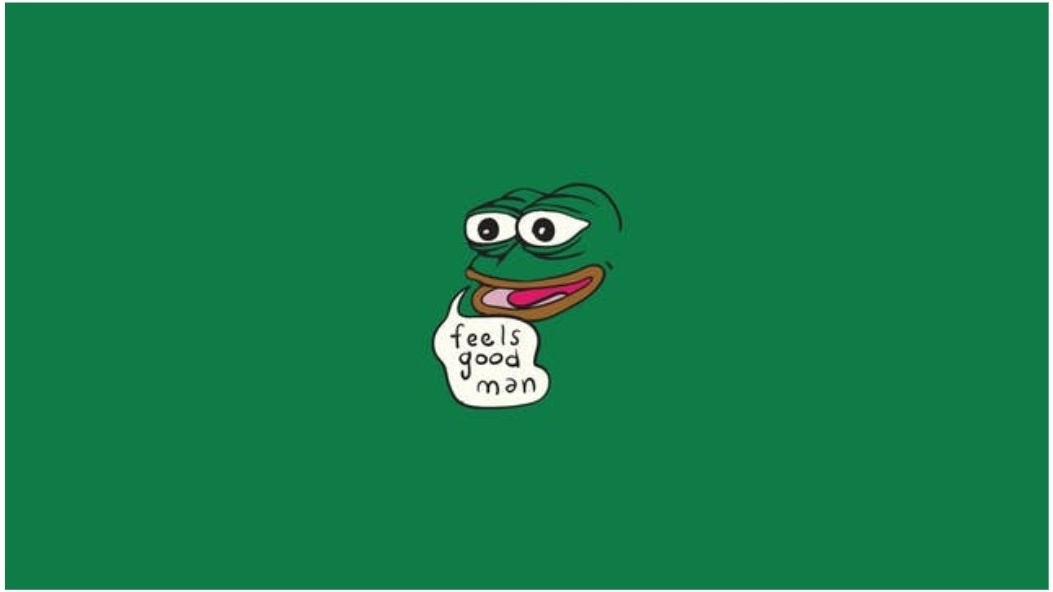 Pepe the Frog needs no introduction by now. The laid back cartoon that took the farthest corners of the internet by storm has seen better days. One of the formerly harmless founders of modern meme culture was taken hostage behind enemy lines in 2016. Indie cartoonist Matt Furie’s labor of love went from being a mascot of his passion to that of the alt-right. There can possibly be no denying this by now, self-proclaimed right-wing influencers have been parading the little green fellow for years. Pepe’s rise and demise is not only truly bizarre but also a prime analogy for internet culture’s prevalent yet underestimated role in modern society. Feels Good Man arrives just in time to fuel an ongoing conversation in the fight against neo-fascism: is it possible to reclaim art when it has been so heavily tainted in red?

Red as in ideologies and literal blood. The alt-right have associated Pepe’s likeness in many of their cruel acts of violence, some even ending with the unforgivable loss of innocent life. Fellow animator and debut director Arthur Jones takes viewers all the way back to the conception of Pepe alongside creator Furie himself. Furie has been very outspoken of his contempt for how his character was essentially stolen from him by the worst of the worst. He began the “Save Pepe” campaign in 2017 as the first step in removing his notable work from the Anti-Defamation League’s official database of hate symbols. Furie having already futilely tangoed with the press in these last critical years is at a pivotal point. Jones and the team behind Feels Good Man aspire to spark change through a much-needed fresh approach – a gamble that could have not paid off more.

Feels Good Man is one of the most ingenious and engrossing documentaries of recent years. Quite possibly also one of the most crucial as internet culture sees no limitations with modern expansion. There was bound to be a documentary on Pepe eventually, but it seems like Jones and his team were destined to make this daring feat. The film does not settle with just breaking down the obvious. Yes, the alt-right are today’s villains. Yes, it was utterly wrong for neo-fascists to adopt someone’s art and furthermore make the rest of that person’s life a living hell. Could Furie have taken more preemptive steps to avoid this mess? Perhaps, but then again who would have thought that a deadbeat frog would attract such hate? It turns out that this tale of ludicrousy makes a lot more sense through an absurd lens.

Jones and his team acknowledge the insanity of their topic and promptly take that inspired attitude when translating it on screen. After everything he has recently been through, Pepe is well-deserving of such inventive therapy. The unorthodox, at least to the common viewer, approach matched with Pepe’s story somehow magically brings out the saneness of it all. It turns out, yes, one can trace and intricately dissect this scoundrel of a frog’s downfall. The film ravels a substantial timeline – from Pepe’s original appearance in Furie’s Boy’s Club comic, the first time Furie uploaded a Pepe image on the internet via Myspace, to 4chan’s adoption of the character. This, of course, leads into the 2016 U.S. Presidential election until the present. No other documentary can guarantee an audience valuable insight from philanthropists, cartoonists, cryptocurrency traders, attorneys, memeticists, journalists, authors, occultists, and legitimate “4chaners” all under an hour and thirty minutes.

Some may find all the above unreal or comical, but Feels Good Man not once treats itself like a punch line. Being informative to the most creative degree opens doors for any viewer that falls between being the least knowledgeable on Pepe’s story to the most dedicated aficionados. The fact that the film reaches great clarity with all that it is juggling in just the average feature-length is a testament to superb pacing on behalf of the filmmakers. Jones may own the title of director, but Feels Good Man radiates the talent of many bright voices – all with the same love for ingenuity that Pepe once stood for.

Those who should definitely not go unsung are animators Jenna Caravello, Nicole Stafford, and Khylin Woodrow. Lead by Jones, who also lends a hand, the group creates imaginative and lively animation featured throughout the entire film. Pepe rightfully feels like a living character in his own documentary, treading a unique hero’s journey as the viewer follows along in reality. The animation is memorable in its own ways while still honoring Furie’s distinct style and spirit. This supported by an original score from Ryan Hope and Ari Balouzian drag one’s emotions for a ride. Audiences get to see an expression of Pepe in a way Furie would prefer, literally beside himself in a new medium for the character no less.

Additionally, Feels Good Man asserts a silly yet critical truth: Internet culture, including the haphazardness of memes, is not only suitable but far due for critical evaluation. The “anonymous” subspaces of the web, the birthplace of the alt-right’s frog, carry far more influence in society than people want to accept. Turning a blind eye, purposefully or not, is what lead Pepe to fall from grace. Whether because of generational divides or intrinsic tastes, many will initially scoff at the prospect of “meme documentaries”. Feels Good Man changes the tide by not only stripping away the anonymity of the “anonymous” but also by fragmenting their practices in a justly candid manner. One cannot help but feel like this film opens the door for more just as crucial explorations for wide audiences.

Furie’s experience as an indie cartoonist receiving the blame for a modern hate symbol against his own will is soul-crushing to see. Anyone who has ever expressed themselves creatively will be able to empathize with Pepe. Just like the best documentaries, Feels Good Man is both frustrating and beautiful at the same time. It comes to an end on the most powerful note, shedding light on the question it set out to ignite in the first place. Art works and inspires in mysterious ways. Once someone puts something out into the world – it may not always truly be theirs anymore, but it will retain its core as long as there are others who are just as passionate and willing to put up the good fight.