‘The Donut King’ Review – Donuts Could Not Be More Inspiring 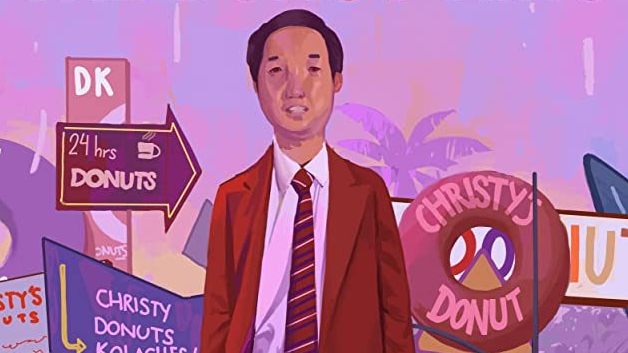 Fleeing the Khmer Rouge regime in Cambodia with his wife and three children in 1975, Ted Ngoy made his way to America. He traveled with pockets that could only fit so much of the desire to make a name for himself and the little money he had. Like many refugees, Ngoy found work as a janitor in California, but he was, unfortunately, unable to make ends meet. Needing more money, his American sponsors find him a job at a gas station and retail store where he would work to the bone. One late night while working, he noticed a steady stream of traffic in and out of a shop across the street. Curious to see what all the fuss was about, Ngoy approached the store to only discover delicious, round confections with holes in the middle.

Being a refugee from Cambodia, Ngoy was unfamiliar with America’s favorite treat: the donut. The store before him was a donut shop, and he was intrigued from the start. Taking a bite from one made him feel like he was born again! Recalling this memory, Ngoy says that from this moment on he knew that the donut was his path to success. Inquiring about how he could make donuts himself, the cashier sent him to Winchell’s, a donut chain that spans across the west coast.

By the mid-80s, Ted Ngoy owned over forty donut shops across California and trained hundreds of Cambodians in the art of the donut. He leased properties out to Cambodians that aspired to own donut shops like him, trained them on donut-baking, and sponsored dozens of refugee families. Now, Cambodians own over 90% of independent donut shops in California along with the many Cambodian-owned shops across the U.S.

Director and cinematographer Alice Gu takes this inspiring story of hardship to craft her own delicacy, The Donut King, and it is electrifying. Gu’s documentary tells Ngoy’s story from the beginning to the present day. She interviews a variety of individuals whose lives have been shaped by Ngoy’s work, stuns with exciting visuals, and fills the silence with vibrant beats. Undeniably, one of the greatest feats of The Donut King is its jaw-dropping visuals. This impeccable painting of a man captures the mood and sets the tone throughout the entire running time, eyes are drawn onto the screen and cannot be removed. Gu’s work absolutely shines, emphasizing the vibrant colors of the donut shops to the vintage tones when Ngoy reflects on his time as a boy in Cambodia. The few cuts of animated artwork paired with dream-like and retro visuals are a marvelous pleasure to watch. Solely based on visuals, the film deserves your greatest applause.

However, The Donut King also excels in other areas – namely its narrative. Telling Ngoy’s story is excitable and inspiring; it motivates audiences and begs them to go out and follow their dreams. In a way, the documentary acts as a tribute to the American Dream. Many migrants coming to the U.S. only achieve some small portion of the mythic promises that the “legend” holds, but Ngoy has been able to conquer it.

Unfortunately, with some rises there are downfalls. Gu does not shy away from telling the truth about Ngoy’s eventual collapse, detailing his gambling addiction and affair. She shares his remorse and guilt which acts as a warning to the audience. Be careful with your successes, Ngoy practically warns, or you can become too greedy and careless with your blessings.

What is inspiring quickly turns into a solemn and sad reminder of what was, but Gu does not stop there. Instead, she powers past Ngoy’s suffering and emphasizes his impact on Cambodian Americans. They have Ted Ngoy to thank for their donut shops; even though his greed led to his eventual downfall, his inspiration and drive brought all of the refugees and immigrants one step closer to achieving their own American dreams.

As the distinctive electronic music (with its lyrics describing the donut-making process) plays during the credits, the film imparts a feeling of pride for Asian Americans and their hardworking spirit. Although the music choice is a bit jarring compared to the sentimental tone of the piece, I feel deeply connected to it. I am the daughter of Vietnamese immigrants that work white-collar jobs, however, my grandparents worked tirelessly when they came to the U.S. They worked poor-paying jobs that paid practically pennies in order to fund their children’s education. Although my grandmothers did not work in nail salons like the stereotype implies, I felt a sense of pride for the Vietnamese nail salons. Just like the Cambodian donut shops, they took after whoever started the nail salon “trend” for Vietnamese women and made their successes.

The Donut King is an exuberant visual reminder of honor for people with familial ties to the American Dream. People come to the U.S. to fulfill their hopes and aspirations – when they are allowed to succeed like Ted Ngoy, they can do incredible things. Gu could not state this in a more eloquent manner with her work.

Without divulging into gory details, Courtney is a foodie, hobby artist, and nap enthusiast who loves herself a little bit of Robert Pattinson.

Lynn Chen Talks ‘I Will Make You Mine’...

Lorenza Izzo on Her Breakthrough Role in ‘Women...