Home » ‘Phineas and Ferb: Candace Against The Universe’ Review – A Mostly Enjoyable Return to Form
Film

‘Phineas and Ferb: Candace Against The Universe’ Review – A Mostly Enjoyable Return to Form 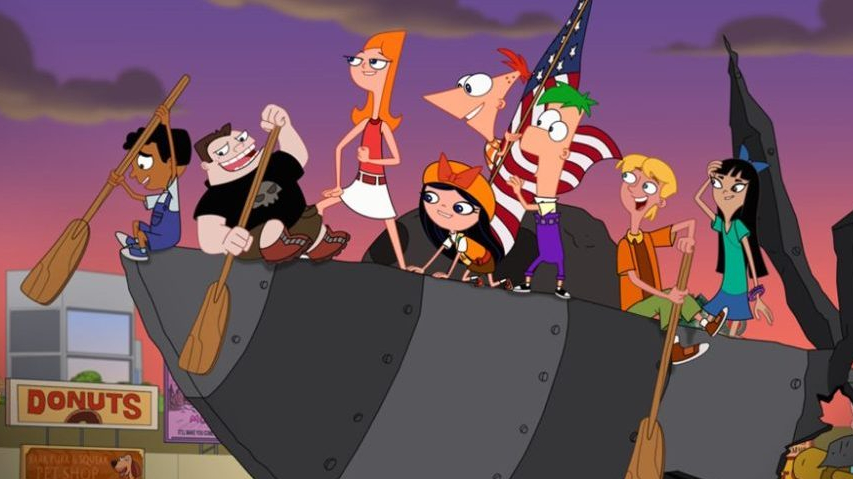 There’s been 146 days of quarantine fever with Phineas and Ferb just to end it, so the eminent question of our situation is will DiscussingFilm recommend it?

Going into this movie, my expectations were undeniably sky high. Just the night before, I rewatched the all-time classic, Phineas and Ferb: Across the 2nd Dimension, one of the best Disney Channel Original Movies to ever grace this planet. I wanted to make sure that, despite having been released over nine years ago, it did not sour with age. And, of course, it had not. Charming characters, lively music, and thoughtfully compelling writing make the very first Phineas and Ferb movie into the epitome of the franchise. With songs like “Summer (Where Do We Begin),” the movie works like a microcosm for what makes the show so appealing to audiences both young and old.

From the get-go, Candace Against The Universe is different. Rather than featuring the Flynn-Fletcher twins, this is a Candace-centric story, and those expecting another wacky story with the boy’s outrageous inventions will notice a relative lack. To crudely label it, this feels less like a Phineas and Ferb movie, like 2nd Dimension, and more of a spin-off film. When Candace is abducted by aliens, she re-evaluates her place in the world in relation to her brothers and universe at large. It’s a question that’s been presented to the character before; in 2nd Dimension, for example, Candace ponders the existence of a “mysterious force” that dictates her busting success. She asks herself a similar question here, but rather than approach her insignificance as a literal possibility, the film decides to chance a more internal, character-driven alternative – one that wants her to confront those feelings of inadequacy head-on… not unlike in the all-time smash hit “Queen of Mars.”

For a while, actually, I thought this film was basically redoing “Unfair Science Fair Redux.” As the film gets going, it feels somewhat familiar, but lacking the snappy charm of the recognizable episode. Candace feels neglected by the universe, so when she finds herself in the presence of a gracious alien race, she thinks she’s found her place. Although the Mars episode of the show resolves its central question with a slightly different moral, it does reflect a lot of thematic similarities to Candace Against The Universe. With a comparable story, it’s only after the addition of a number of plot contrivances and B-plots that Candace reaches its full 84-minute runtime.

That’s the thing about Candace Against The Universe; a lot of it feels inconsequential. You could remove Vanessa and Doofenshmirtz from the film entirely and be left with largely the same film, minus a few goofs and one of the few new songs worthy to exist alongside “Ain’t Got Rhythm” as a franchise staple (seriously, Doof and Isabella’s duet goes pretty hard, even if it feels unnecessary). Heresy it may be, but Perry the Platypus exists in the film only to reinforce the idea that this is a Phineas and Ferb movie. His secret agent antics have no real consequence here, unlike in Across the 2nd Dimension where they play into a larger emotional arc between him and the Flynn-Fletcher brothers. In a normal episode of the television show, Perry and Doof play off each other in high-energy, witty scenes, but here he is reduced to mostly solo appearances where the only reason you feel anything is a soft ballad piece about how brave he is. The film’s conclusion, even, feels half baked. From a glance, it seems as though it was bound to repeat the third act of Across the 2nd Dimension, but it pulls a switcheroo at the last moment and goes for a paradoxically expected deus ex machina instead, somehow making a more disappointing yet satisfying finale.

For any long-time fan of the show, Phineas and Ferb exists in the perfect sweet spot of children’s television: the intersection of cartoon animated visuals and sophisticated, clever writing. It always feels a level of maturity above that which you expect. The gags and slapstick are always interesting in one way or another, even if the show is meant to primarily appeal to children. In this movie, a character flosses. On the other hand, it did have one of the funniest, most unique moments of the series when it comes to meta-comedy. I won’t spoil it for those who are eagerly anticipating their own viewing, but it’s a nice treat for those who are familiar and well-versed in the background of the show.

In addition to not feeling consequential, a lot of the writing feels unnatural. The film’s opening song, “Such a Beautiful Day” falls flat in being a satisfying re-introduction to this universe, and is relatively unsuccessful in fully establishing the ideas that are later expanded upon. It feels like the introduction to an entirely different kind of adventure than what we are subjected to for the remaining runtime, something that – albeit less unique and intriguing – would feel a bit more close to home and more reliably entertaining. Almost immediately following the song, already shaken from such an abrasive sequence of animated music, the call to action (Candace and Vanessa’s abduction) feels abrupt and sudden; a moment with hardly any set-up. And as somewhat aforementioned, Vanessa Doofenshmirtz feels only included as a catalyst for her father to join the boys’ rescue operation, who is only included on the adventure to make it feel more akin to the show.

An extension of the jarring feeling of the film’s writing is the music. Listen, I want to be wrong as much as anyone else here. “Carpe Diem” and “Fabulous” will go down in the history books as some of the most well-written, well-executed musical pieces made for television, but there are no songs here that really stand out, even after multiple viewings. The “Adulting” duet works well enough, but most of its charm comes from the unlikely head-to-head pairing of Isabella and Doof. “This Is Our Battle Song” is a fun passing number that plays well in terms of both the fourth wall and the plot, but it lasts only a few fleeting moments and wouldn’t play well as a standalone song. “Antithetically,” the Perry ballad is mostly funny in context of the film, but feels a bit disjointed when intercut with character dialogue.

Perry’s ballad isn’t the only time in the film where music is used as a joke in and of itself either. “Such a Beautiful Day” switches between its calm groove and rock verses in a strained attempt at comedy, and the aliens sing an obnoxiously extravagant “welcome” song with no warning. Even if they aren’t meant to act like jokes, the lack of naturalistic energy and musical ramps make the songs feel sudden and oftentimes grating. Musical numbers in Phineas and Ferb generally aren’t jokes themselves, but contain the jokes; that’s part of the appeal. To a certain degree, the show takes itself seriously in spite of its camp and blissful optimism. It simultaneously knows exactly what it wants to be and respects the audience’s sense of humor. This kind of restrained “intellectual” approach feels all but absent here in not only the music but many of the written jokes as well.

These critiques on the film overall are not unlike its animation. Sometimes it’s noticeably improved from the show with stylistic shading and more dynamic, ambitious movements, yet at others, it feels indistinguishable from the show – complete with colorful, yet flat compositions. While it does begin with a relatively interesting premise, it doesn’t go far enough to separate itself from the expectations that come with following such a beloved series. If you’re a fan of the show, you’ll probably find some reason to at least appreciate Candace Against The Universe. With an unenthusiastic shoulder shrug, the conclusion lands somewhere between “this is not Across The Second Dimension” and “you might like this.” If you already have Disney+, it’s probably worth a watch.

Phineas and Ferb: Candace Against The Universe premieres on Disney+ August 28!