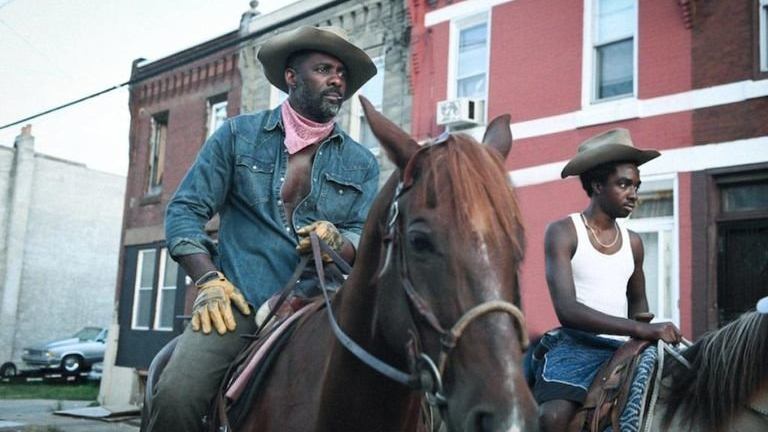 Idris Elba’s latest highly anticipated project is unfortunately a dud. Concrete Cowboy is well-intentioned with an interesting premise, which deserves better than Ricky Staub’s paper-thin, trope-filled writing – along with Minka Farthing-Kohl’s atrociously shaky and lens flare-filled cinematography. Technically and narrative-wise, this bold story is let down by impoverished filmmaking.

We follow Cole (Caleb McLaughlin), a troubled Detroit-based teenager. Cole keeps getting in trouble at school, which suddenly causes his mother to abandon him. He is left with his estranged father (Idris Elba), who unbeknownst to Cole is a ‘concrete cowboy’ in charge of a local Philadelphia stable. Having moved in, Cole naturally becomes intertwined in his father’s world. His interest grows first from cleaning the stables to getting more involved, kicking off his journey in becoming a cowboy like his father. Lost in this new world, Cole is met with the help of an old pal, Smush (Jharrel Jerome).

The cowboy aspect of the story is far more interesting than the archetypal, drug-induced coming-of-age side. It’s extremely hammy in its theatrics of straining relationships, also in its stereotypical and over-dramatic plot point of “shady friend or family”. It’s clear that there was purpose in the filmmaker’s intentions, yet Concrete Cowboy feels contrived. It lacks any naturalism and focuses entirely on the wrong things. Perhaps, a documentary on the concrete cowboys of Philadelphia would have been far more interesting.

While Concrete Cowboy boasts a strong cast with the ever-great Idris Elba, Stranger Thing‘s Caleb McLaughlin and Moonlight‘s Jharrel Jerome feel like they are held back from delivering even stronger performances. They give what they can to this overly manufactured tale. No blame is to be held on the cast, but entirely on the lack of vision and vigor from behind the camera. It’s an absolute shame that such an anticipated film with a never-before-seen topic could turn out like Concrete Cowboy.

The moments that shine come from the real-life cowboys. Philadelphia’s own Fletcher Street cowboys, for instance, deserved so much better. The focal point could have been the fascination of a long-lasting and somewhat mysterious tradition to the outer world, instead, it’s derived of nearly all interest as the film becomes helplessly plagued in cliches and poorly executed craft. You can only hope that another Fletcher Street cowboy project of any kind is in the works to rightfully explore this fascinating pocket of culture.