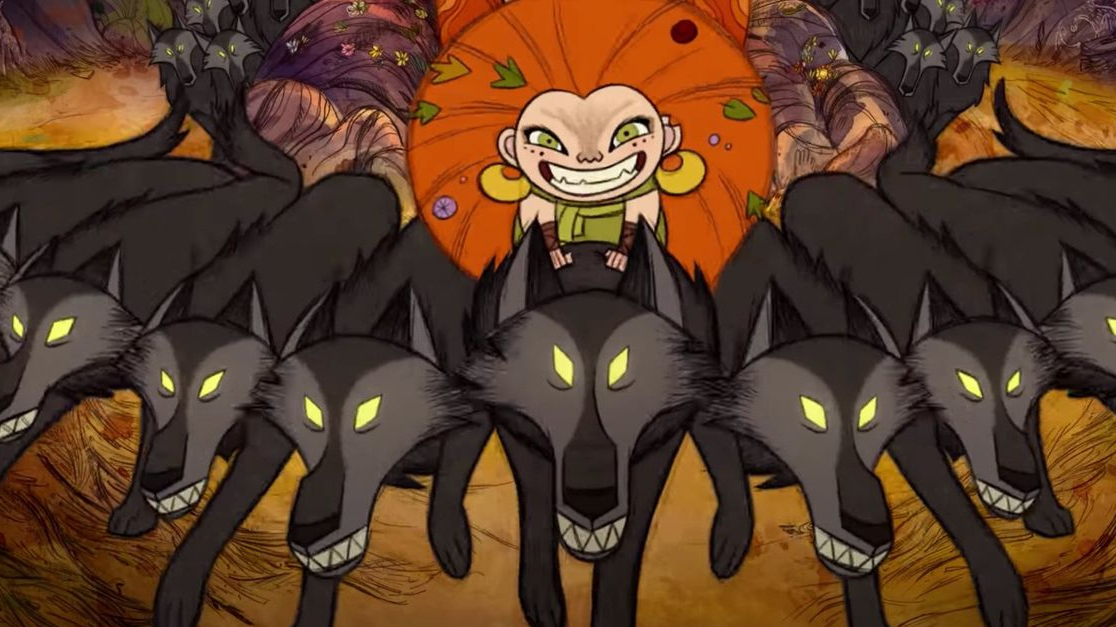 Tomm Moore and Ross Stewart’s Wolfwalkers is the fourth feature from Irish animation studio Cartoon Saloon, following 2017’s Oscar nominated The Breadwinner. The studio has become known for their fantastical stories and unique approach to 2D animation in a landscape where that is no longer the norm. Wolfwalkers represents a continuation of that trend and yet another triumph for Cartoon Saloon.

Wolfwalkers tells the story of Robin (Honor Kneafsey), a young English girl living in a medieval Irish town besieged by wolves. Raised by a wolf hunter (Sean Bean), Robin hopes to follow in his footsteps until they lead her into the heart of a wolf pack. Here, she meets Mebh (Eva Whittaker), one of the few remaining wolfwalkers, a people who are human during the day but become wolves in their sleep. This relationship, along with Mebh’s ongoing search for her mother, is the driving force of the story and provides ample room for exciting world-building and some fascinating thematic work.

While the setup of a child desperate to prove themself as mature is far from unique as a pitch for an animated film, Wolfwalkers’ foregrounding of its father/daughter relationship creates space for a far more nuanced version of that story. The film follows through on that promise in a way reminiscent of Dreamworks’ How to Train Your Dragon movies and it’s incredibly refreshing to see that dynamic built on as more than a barrier to a singular idea of happiness. Robin and Mebh are both wonderfully fleshed out characters with the kind of internality animated films often shy away from. This is helped by a pair of incredibly charming voice performances as well as a fun, if familiar, turn from Sean Bean.

Though Wolfwalkers is ostensibly set in a fantastical version of our world, the very intentional choice to set this story in English occupied Ireland lays the groundwork for the film’s heavier thematic ideas, also providing an opportunity to introduce young audiences to that real world history. The film deals heavily with the ideas of both colonization and a greater responsibility to the natural world beyond impermanent borders and despite it being hesitant to reach any grand conclusions, the sincerity with which these topics are approached is impressive. The central relationship, between Robin and Mebh, carries a lot of the film’s biggest ideas, namely unlearning bias and finding real community. It is a testament to Will Collins’ screenplay that these themes feel absolutely inherent to the story being told, that the smallest gesture in a blossoming friendship can say so much about the worlds these characters inhabit.

There is a stunning quality of roughness to Wolfwalkers’ animation, while other studios strive for realism and consistency, Moore and Stewart very intentionally draw attention to their processes. The effect is an almost contradictory sense of reality, suggesting not that this story is unfolding in front of us but that it must have come from somewhere, as if we are witnessing the continued preservation of a folktale. The story itself builds on this too, an intentionally vague approach to explanation of its more fantastical concepts as well a tendency towards fairytale moralizing creates a sense of timelessness and charm that you can’t cheat. Beyond that, the film is genuinely just gorgeous to look at, every frame is so rich and the animation is filled with so many tiny flourishes of character. I can only imagine how stunning this must look in a cinema. At points the film feels more like classic Disney than the company’s own attempts to recapture that magic.

Wolfwalkers is genuinely delightful and some of the most fun I’ve had with an animated movie in a long time. The story touches on some genuinely engaging topics in a way that will be engaging to younger audiences without leaving their parents rolling their eyes and all in all, it’s hard to find anything to fault. The additional historical context creates a poignancy that sets it apart from a lot of other movies set in this space and it feels like the kind of film people will want to keep coming back to.

Wolfwalkers is set for a UK release October 30 and US release November 13 before heading to AppleTV+ December 11.