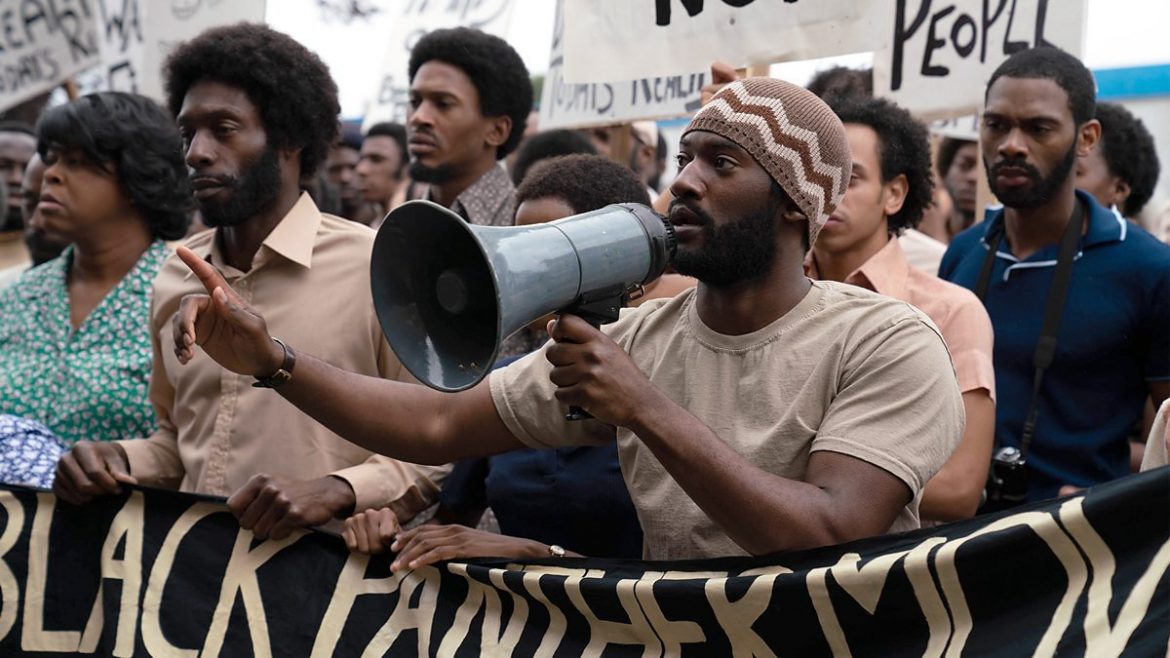 Steve McQueen’s latest project is a profound series of films collectively known as Small Axe. The first installment in this anthology follows the true story of the Black activists that left a mark in British history as the ‘Mangrove Nine’. Their clash with police in the 70s lead to the first judicial acknowledgment of racial discrimination within UK law enforcement. A fiery and provocative piece of cinema, Mangrove shines a pivotal light on the Black British experience. The powerhouse cast is lead by the likes of Letitia Wright and Shaun Parkes, though one rising star makes a unique impression. Malachi Kirby portrays the iconic British broadcaster and racial justice advocate Darcus Howe. Known from his work on EastEnders, Roots, and Black Mirror, McQueen’s anthology gives Kirby a new and one of a kind opportunity to showcase his raw talent.

There could not be a better time to sit down with Malachi Kirby and talk the daring power of a project such as Small Axe. We trace his experience on set to how relevant and important it is to persist in telling these incredible stories. Get to know more of this rising star and his thoughts on the Black British culture of today.

Tell us a bit about how you first got involved in Mangrove?

MK: It was just the usual process in terms of auditioning. It was first a tape that I sent through and then I had two meetings following that with Steve [McQueen]. Actually, small interesting fact, Letitia (Wright) is one of my very good friends and when I was doing the tape for this, I don’t always do this but I actually ended up going to her house to tape it with her friend but obviously she was there. I remember taping this thing and I didn’t feel like I could speak about it. So she’s kind of just sitting at her desk and she overhears the tape. She asks me what I’m taping for and I was like, “Oh man, it’s just this thing. I can’t really speak about it” and she just says, “Oh, okay.” But then she hears more of the scene and she says, “Wait, hold on. Is that Small Axe?” I was confused so I asked her how she knows about it and she just says, “Dude, I’m already in it!” She had already got her part and so that was quite a beautiful moment that we shared and look back on and laugh about.

Your character of Darcus Howe goes through many hardships within this story, so what was your process in creating and developing him for the screen?

MK: Honestly, it felt less like creating and more of just trying to understand him because Darcus (Howe) lived, he passed in 2017. I didn’t know much about him other than a short interview during the 2012 riots that he did. I didn’t know anything about him really, but I think he’s one of the few characters in Mangrove who has so much documentation because he was a very public person. So it was more about just trying to grasp as much of him as I could because I realized he lived a whole life and there was a wealth of knowledge and an awareness of the world that I didn’t have.

In the short space of time that we had to prepare, I just tried to get an essence of him and of what was important to him, as well as his accent because I believe his voice was such a significant part of who he was and the way he articulated himself, his regalness and his lack of responding so emotionally to things. It was mainly just trying to get a sense of the things that he cared about in his heart, so that I could respond to those moments in a way that felt authentic.

When you go about portraying someone who lived a full life, you’re often held accountable for the decisions you make on-screen. How did you go about researching for that?

MK: The accountability, it’s heavy. It’s true. The research, it was reading books and his biography. The production team very kindly sent all of us these packages of documentation such as newspaper articles and video clips from interviews. With Darcus, there was a lot of stuff on him when he was an older man, but not so much of him when he was young at the time. So they had stuff from the archives that they were able to send and I was just listening to his voice over and over again because his voice I think was probably the hardest part of the preparation. His accent, but also his particular voice and just the way he would speak was one of the hardest things to get my head around.

Now Darcus Howe does have a son, did you get a chance to talk to him?

MK: Yes, actually his son goes by the same name Darcus. I have a friend who put me in touch with him. It was weird actually, because I got in touch with him thinking that I wanted to just pick his brain about everything to do with his dad, especially for the moments that weren’t so public like where he has the scenes in the house with kids because those are things you can’t read about. But actually, what he gave me I realized was more than what I needed. He gave me support off the bat and told me he was really grateful that I could play his dad.

I wasn’t expecting that but actually, it was an instinctual thing that I decided to just leave it there and not dig too deep because as I said, we had two weeks of rehearsals. There is only so much you can do in that time and it can be very easy with playing people that actually lived to be too confined to the reality of who they were, but the reality is that I’m never going to be him. So there has to be some artistic license that I bring to it as Malachi and trust that it’s okay. But his blessing I think was enough for me at the time so I just went with that.

You got to work with the legendary director that is Steve McQueen. What was that collaborative process like?

MK: I don’t know how to speak about it and I’m sounding really cheesy, but it was like a dream. In my head and a lot of our heads, this was just TV and I feel like there is a definite difference between TV and film in terms of the way you work. But with Steve and he said this, he told us this is film. Not only was he shooting one film, but the space and environment he created was like a film set. We weren’t confined to time, he allowed scenes to breathe. It wasn’t cut short because it’s going to be confined to a time slot when it goes on TV. There were moments to breathe, be silent, think, and just be present. He just cares. It’s so rare to come across someone who is that skilled and so creatively brilliant, and also just a genuinely nice person.

So to have both of those things with him was just a joy and I think really important for this kind of subject matter. To have someone who not only understands it and is able to portray it, but someone who actually cares about it because that made all the difference. It stopped him from just kind of going, “Yeah, we got the scene.” It looked great when Steve would be like “No, that wasn’t it. You didn’t give yourself today. You weren’t present, let’s do it because I didn’t see you care” which changed everything.

You got to work with actors such as Shaun Parkes and Letitia Wright who you already mentioned. What was it like getting to work alongside that cast?

MK: Brilliant! And again, Steve is someone who cares about even the extras. They didn’t feel like extras to be honest and it’s rare that you have that. Everyone felt like they were part of it. It was great and there was this unity – we didn’t even have to speak about it. It was this shared understanding that we were all there with a common goal and are passionate about this subject. So every time we came on set, we just served each other. There was no ego. We know why we’re here, let’s give ourselves to this as much as we can.

I think we all knew this would be something that would definitely resonate with the world when they were able to finally watch it. It was surreal because it was before the marches that happened this year. I don’t think anyone saw that coming, even though it had been happening. The way that it blew up this year was a whole other thing and looking back, it was kind of the calm before the storm on set, doing these scenes, not knowing what would then happen, but it was a beautiful time.

On the same note, racial injustice is still so prevalent and Mangrove rings true to such recent events. What do you feel about its relevance? Have you seen any responses to it and what do you make of that reception?

MK: I live in my little bubble, so I haven’t seen many responses. But in terms of its relevance, I hope one day that it won’t be relevant but this isn’t about a march or a speech, it’s so much deeper embedded into society and the way that we live. It’s probably going to be relevant for quite a while still, but I do believe we have made progress from when these events actually occurred in the 70s to now, but there is still a long way to go. There is still a lot of work to do and what I really love about what’s happening at the moment is people are understanding that individual effect on this now as opposed to just looking to one politician or one leader who we’re going to actually hold accountable. It’s a beautiful thing that is happening right now and I hope that we can continue in that same mindset.

To wrap up, Small Axe is a collection of many different films. Do you think its lasting impact will spark more exploration into untold aspects of British culture?

MK: I do hope that it will spur on the shared understanding and importance of telling these stories and seeking them out because they are there, you don’t have to look too hard. I hope that creatively and in terms of the film industry, we start to share these stories and not just for the sake of it and not to tick a box, but to understand their relevance and impact on society. But also if they don’t want to, my plan is to do so because these are things that I care about.