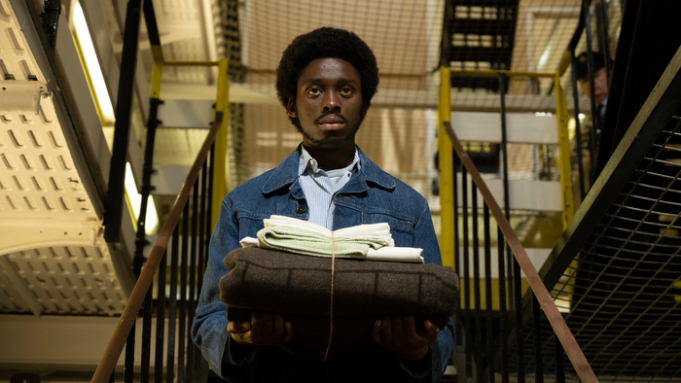 Alex Wheatle sees ex-Langley Park student Sheyi Cole shining in his first major role. He is Alex, a young teenager brought to live in Brixton who faces the challenges of adapting to a very different world. Steve McQueen once again delivers an engaging film that marks a fourth win for the Small Axe anthology. Alex Wheatle contrasts as it focuses on an outsider trying to fit into the culture. The other installments have focused on people deeply routed in London’s West Indian culture. Like all of McQueen’s Small Axe films though, Alex Wheatle explores a wholly unique perspective of the Black British experience – this time based on the true story of the award-winning writer of the same name.

A mediation and reflection on importance, that is what this tale accomplishes. Alex Wheatle (Sheyi Cole) is thrown into jail after the 1981 Brixton uprising and is hastily introduced to his cellmate, an aging, wise man who takes him on a journey through his past. To find himself, Alex looks back. Primarily, one of the main reasons for McQueen making Small Axe is to educate, to teach the past of a long-forgotten and excluded culture. Alex Wheatle feels most representative of such ideals; it’s a learning experience. To find out who he truly is, he must reflect, which is essentially the overall goal of the series.

Alex was abused by his ‘auntie’ as a young boy. He was abandoned by his parents and left to British social services. After being hurled into a cell in 1981, out of the shadows steps Simeon (Robbie Gee), a friendly Rastafarian with a few bowel issues. After hours and days of hearing Simeon lay waste to the toilet in the corner of their cell, Alex is filled with anger and attacks the older prisoner. At this point, Simeon shouts, “Listen man! What is your story?”, to that Alex replies, “My story? I ain’t got no frickin story!”.

The pain felt by the neglection of Alex’s parents and his suffering is felt truly. That very line uttered is the kick starter for McQueen’s retreading of the past. On a smaller scale, it recounts the internal sufferings of Alex in his attempt to fit in during his youth. Classism is felt on all sides, the inherent and sadly prevalent racism of Britain at the time. Nevertheless, the film starts from a rather innocent perspective as we follow young Alex who is presented as charming, thoughtful and naive. Sheyi Cole is a fantastic new find, a talented up-and-coming actor that surely has a bright future ahead. His range is remarkable. From scenes of anger, joy, to young naivety, he brings everything home.

Shabier Kirchner returns as cinematographer after doing such a phenomenal job on Lovers Rock, Mangrove and Red, White and Blue. His work on Alex Wheatle is as dynamic as ever. For instance, Alex and a friend listen to reggae music in a school lesson, only to be barked at by a racist white student, Fists are thrown and Alex is launched into the sports hall. Lying on the ground, silent and still, Kirchner’s camera pans in slowly, only to halt and pull back as he lies there angered and mute, face to the floor. It’s moments like these that signal the frustration felt and vividly depict the cruelty thrown on Alex.

Alex Wheatle is a vital entry to Steve McQueen’s Small Axe anthology of films. It tells a fascinating story about belonging. McQueen captures such life to Alex, all the little nuances and frustrations from his past are propelled to the present where Alex searches for his story.

You can watch Alex Wheatle on Prime Video