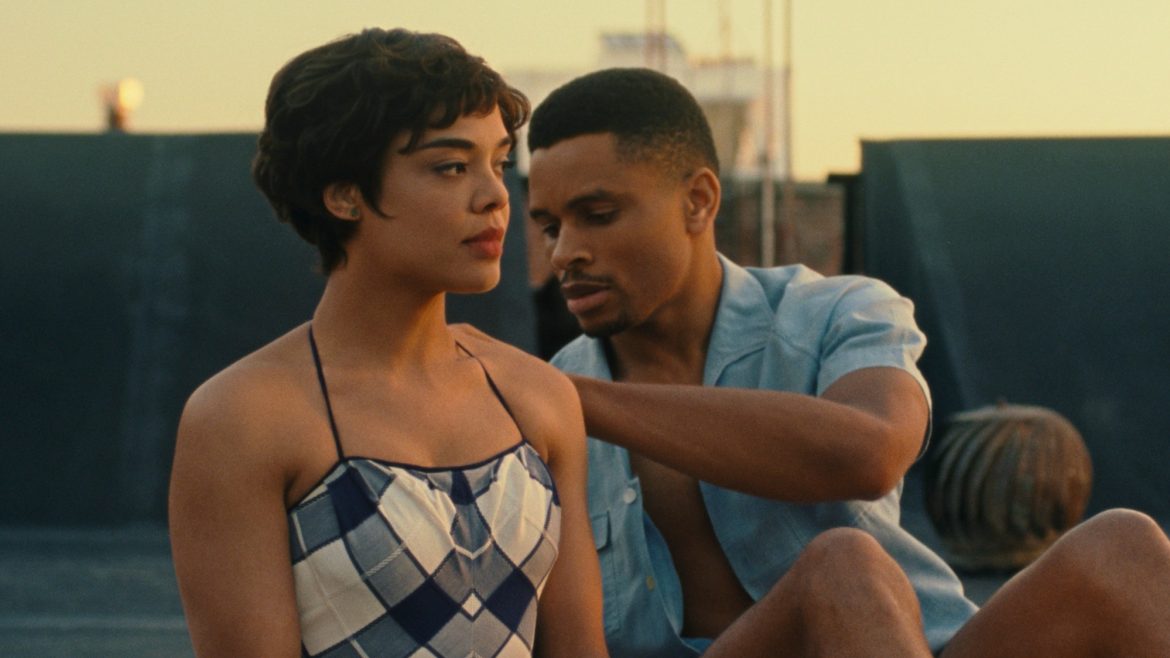 In the midst of sequels, reboots, and remixes out comes a charming film of boy meets girl. An ode to the Golden Age of Hollywood, Sylvie’s Love is the romantic drama 2020 deserves. The film follows a young couple through all the ups and downs during the late ‘50s into the early ‘60s. Writer/Director Eugene Ashe brings back the spirit of epic romances with a revisionist spin. Importantly this year, the demand for stories surrounding Black joy is at an all time high – Sylvie’s Love answers the call.

The bright eyed Tessa Thompson commands as Sylvie, a well bred debutant from Harlem with huge aspirations. In comes dazzling saxophonist Robert (Nnamdi Asomugha) to work at Sylvie’s family record shop. The film takes its time to build on the budding romance, making sure to fully entrance the audience into the beauty of the period. The sets, music, and the costumes are a knockout. Costume Designer Phoenix Mellow chose clothing that reflects an Audrey Hepburn feature. Thompson dominates the opening of the film in a gorgeous bright blue Chanel gown. The Hepburn similarities don’t end there, the story is very à la Breakfast at Tiffany’s. Sylvie is very independent, shirking away from the responsibilities of engagement to a man off in the Korean War. She also has the impossible dream of working in television production. Despite meeting Robert, she sticks to her goals throughout all the obstacles thrown at her. Thompson is very much in her element compared to Asomugha’s more contained performance.

However, the chemistry between Thompson and Asomugha is the driving force of Sylvie’s Love. The most romantic scene is of Robert playing his sax outside of her window to get her attention. It’s hard not to root for them when they separate midway. Robert goes off to a gig in Paris with his band, while Sylvie is left to her own devices. Jazz is expertly woven through thanks to music by Fabrice Lecomte. Ashe similarly grew up in Harlem with a background in music, which is why the film flows in beats. Five years pass and Sylvie is working as a telephone operator. She quite seamlessly makes the jump to a Television Producer’s Assistant then shortly promoted to Producer. This is where Ashe takes some artistic liberties in a more modernistic approach. Considering it’s the early 1960s at this point, Sylvie would never have had these opportunities, but it’s nice to pretend for an hour and fifty four minutes that she succeeds.

Ashe’s melodrama is more familiar than fresh, the consolation is focusing the entire film on a mostly Black cast. A feat that would have never been done during the era it’s set in. Though most films set in this period tend to focus on the Civil Rights Movement, this one merely glosses over it. It’s there, but not really touched upon. A conscious choice that is more celebratory of Black life opposed to the latter. Sylvie’s Love never eludes the obvious classical Hollywood tropes, it fully dives into them. From a romance perspective it works, but as a modern film it may be lacking for some in this department. Leading up to the anticipated happy ending, the plot gets lost in itself. It’s more of an emotional ride of heartache and happiness.

It begs the question whether modern day audiences will seek out this film upon its Amazon holiday release. Admittedly, it is a tear jerker and a more character driven piece. Thompson is what vintage dreams are made of. She fully embodies the character and era. Her performance alone is worth visiting. Ashe has created a world you could fall in love with along with its leads. The film is a reminder of the existence of Black lives when history has often overlooked them. After what has felt like the longest year, this charming slice of melodrama feels just right. Grab your tissues and a hot drink, Sylvie’s Love is the feel good must watch to get lost in.