‘Eight for Silver’ Review – A Comeback for Werewolves | Sundance 2021 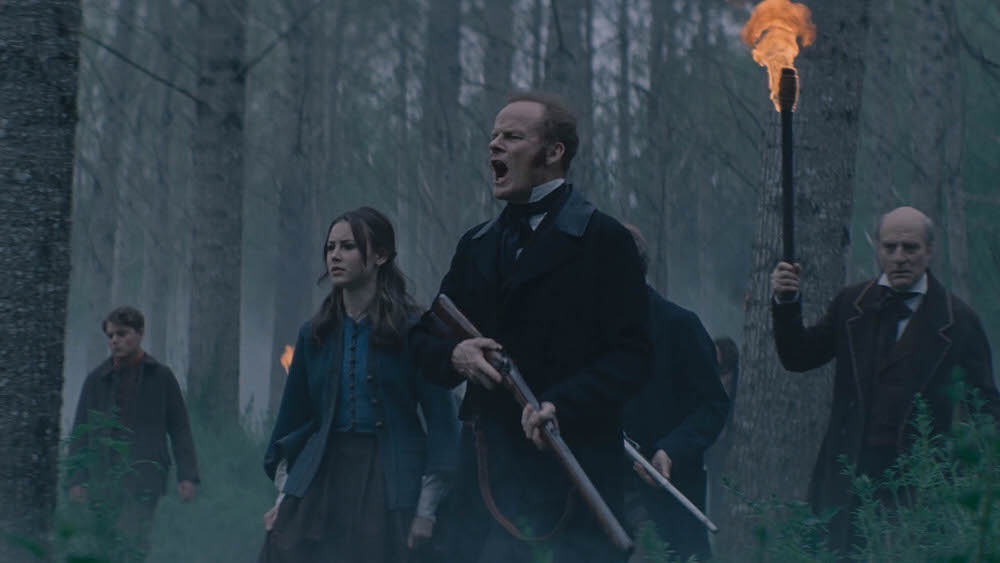 The Werewolf is one of history’s staple movie monsters. Standing toe to toe with Vampires and Zombies, though it’s undeniable that the Werewolf’s iconography is beyond compare. The last decade has seen a new wave in the horror genre, and with it some ingenious re-imaginings of classic creatures. The films that have proved to stand stronger are those that not only revitalize the monsters, but subvert the tropes that time has burdened them with as well. Vampires and Witches have gotten their due (see the brilliant A Girl Walks Home Alone at Night and The VVitch). Sadly, werewolves have yet to receive this same treatment. A real shame considering how much untapped potential is just lying there… until now. British filmmaker Sean Ellis answers this call with Eight for Silver and to much delight, delivers some fantastic results. Unfortantley, the film doesn’t take that aforementioned step in subverting old time tropes.

Eight for Silver follows the family of a wealthy land baron in late 1800s France. Along with a group of elders, they watch over their settlement and do whatever it takes to “preserve” its integrity. When a Roma group arrive and peacefully claim their share of what is originally their land to begin with, the elders – in disgusting white colonizer fashion – wipe them out. But not before being successfully hexed with a werewolf curse. The beast manifests within the land baron’s family and starts to take the townsfolk out one by one. Luckily for them, there’s a new pathologist in town who is hot on the trail of uncovering the secrets of the werewolf. He joins the land baron and after identifying mutilated corpses as being attacked by an unknown animal, the hunt unceremoniously begins.

Ellis’ werewolf piece, in truth, is more than just a creature feature. It’s a dive into betrayal, guilt, and the obsession that comes when trying to rectify said acts. The director/writer uses these themes to form a new take on the iconic beast, and it is absolutely one to remember. This werewolf isn’t summoned by a full moon nor does it regress back into human form. It completely consumes the body and soul, turning into a bloodthirsty shell of whatever humanity was previously there. It’s a clever spin that subtlety goes hand in hand with the narrative. Moments brought to life with practical effects shine, for both the wolf and the gore effects of its victims. Much of it can be rather shocking, such as seeing someone’s forearm dangle loosely from their elbow. Eight for Silver reaches points that will certainly test some viewer’s stomachs, all the while reminding horror fans of how effective the art form can be.

Boyd Holbrook (Logan, The Predator) makes a turn as the pathologist-turned-werewolf hunter. The actor has built his own group of devoted fans, and they will find lots to enjoy here. Those unfamiliar with his name, and even the naysayers, will board the fan train; he truly pulls through as the film’s MVP. Though Kelly Reilly (True Detective), Alistair Petrie (Sex Education), and the rest of the cast are just as committed in this filmmaker’s vision, one that is notably brought to life through 35mm film. Ellis also serves in the role of cinematographer, and with his profound background in still photography, makes superb use of shooting on celluloid. He manipulates light and frames the desolate countryside in ways to create a haunting yet gorgeous atmosphere. Sometimes the viewer is in awe right before receiving chills down their spine. It’s effective enough, until Ellis places all his bets on it.

For every new idea Eight for Silver brings to the table, there seems to be an old one ready to match it. This wouldn’t be much of an issue if they didn’t pile up enough to actually hold the film back altogether. Ellis has a clean eye for terrifying visuals, that much is clear by the long-lasting eeriness felt throughout the film. But for whatever reason, he is inclined to rely consistently on jump scares to fill in the space. There is one specific reoccurring motif that signals an incoming jump scare, and it’s importance to the plot forces it to repeat over again – each time losing more of its effect. The visual in question is already genuinely scary enough and Ellis does manage to elicit moments of great fear from it, though this doesn’t stop his structure from growing stale.

In another uncanny setback, it is rather disappointing that a film that does so well with breathing new life into werewolf mythology stems from the stereotypical “gypsy curse.” An old Hollywood cliché, it is noticeably thin here when not much else is done to modernize the motivations behind the beast. The curse itself is unlike anything seen prior – which is the saving grace – but at the end of the day, Eight for Silver still paints a marginalized group like monsters themselves. Frankly, this might be enough of a turning point for many watching. A completely fair assessment that sticks out like a sore thumb in an otherwise great horror piece.

The final elephant in the room, the subject of CGI is bound to stir a conversation. The effects on the wolf are noticeably spotty in the second half of the film. In all honesty, for an indie feature that already excels at practical gore, much of this can be forgiven. One can’t help but to think how the digital effects contrast from everything else on screen. Shot on location with beautiful backdrops and within period-accurate sets of mansion and old halls, CGI was always going to stand out. The most horrifying and memorable scene in the film, however, is brought to life with a perfect mixture of the digital and practical. A moment that is impossible to shake off, and unlike anything this current wave of horror has presented, completely makes up for the small moments that don’t look as polished. Many festival favorites are often given a face lift when finally bought by a distributor. It wouldn’t be surprising if that happens here.

Eight for Silver is a very strong, albeit frustrating watch. One couldn’t be more on board with the fresh ideas at play. This will make plenty of people watching wish that the film didn’t falter as much in other areas. The craft and ingenuity on display is still exceptional and a period-set werewolf film that dips into gothic horror will be more than enough for many. The film’s atmospheric veil and nuanced spin on a classic beast make it absolutely worth the time, but it could have been a bit more refined. Nonetheless, Sean Ellis boasts a lot of potential moving forward. Not exactly up there with films like The VVitch, but it resides in the same alley and will surely grab more and more people’s attention for it.

Eight for Silver premiered at the 2021 Sundance Film Festival.