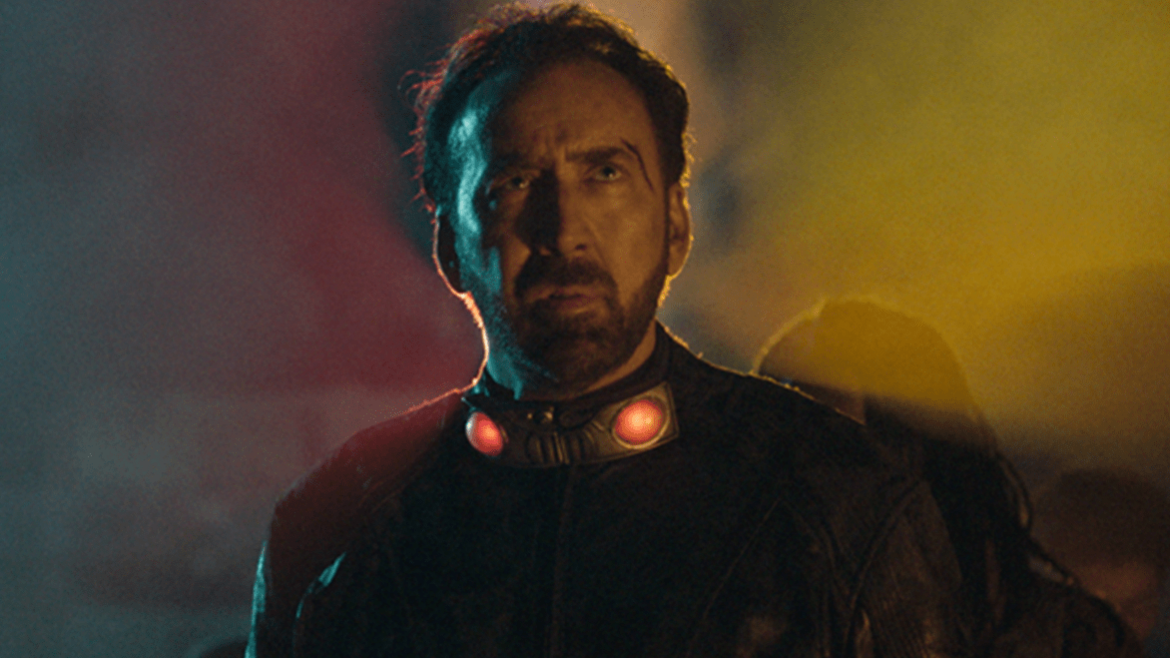 Profound Japanese filmmaker Sion Sono makes his English debut with Prisoners of the Ghostland and… it’s a lot to unpack. An unapologetic Samurai-Western with dashes of Mad Max and Army of Darkness, lead by an unhinged Nicolas Cage who has bombs attached to his testicles. That simply does not sound like a real film, let alone a coherent one. And if it were real, it doesn’t come off as more than another absurd B movie. One that would be balls to wall insane just for the sake of it. Thankfully, Prisoners of the Ghostland excels beyond these hollow conceptions, not only leading to one of the most cinematic experiences of 2021 so far, but one that will more than likely never be replicated again.

Sono’s film takes place in what is referred to as “Samurai Town,” a place where East and West are one and the same. A city designed with a mix of old-time Japanese/American exteriors and postmodern interiors, filled with geisha and cowboys. A notorious no-name crook (Nicolas Cage) is given another shot at freedom by The Governor (Bill Moseley), the ruler of the land who is never seen without his all-white suit. The mission: retrieve his escaped “granddaughter” (Sofia Boutella) from the Ghostland – a nuclear wasteland haunted by mysterious demon samurai. The crook has no choice but to accept, for he is given a leather suit covered with timed bombs (one on each testicle in case he tries something dirty with the daughter) à la the Suicide Squad. He only has a few days to complete the task before he explodes, but things get tricky when he discovers a society of Ghostland scavengers. They claim him to be the chosen hero of an ancient prophecy. He is ultimatley caught between nuclear ghosts and The Governor’s crew of katana-wielding and gun-toting warriors.

Again, this initially either sounds like ad-libbed bullsh*t or the greatest movie ever made. The honest truth is that Sono comes close to making an unforeseen masterpiece. The level of craftsmanship on display in Prisoners of the Ghostland is simply remarkable. The production design, costumes, and sheer level of commitment from the cast make the imaginative set pieces feel palpable. It’s almost as if one is dropped into the expansive nature of an impressive RPG. The various blends of culture and architecture draw an instant comparison to the worlds of the Final Fantasy video games. In fact, this could be the closest fans ever get to an honest live-action adaptation of that style. It’s certainly a sight to behold, especially when an actor as perverse as Cage is at the wheel.

It’s no secret that many will be watching Prisoners of the Ghostland for Cage. Everyone’s favorite madman, the last few years have seen a high demand for his range of insanity. Mandy, Color Out of Space, and more; the ‘Cage Heads’ just can’t get enough with more wild projects like Willy’s Wonderland and The Unbearable Weight of Massive Talent still to come this year. Though with this popularity has grown a just as wild misconception. Many assume fans only like these types of films because this actor is hilarious to look at. One can’t deny that there is a comedic level of awareness from the audience, seeing the man who once tried to steal the Declaration of Independence fight demonic evil with his bare hands for instance. But Cage is just as serious about his craft as any other highly esteemed artist, and has never stopped making that clear. Of course, he isn’t like anyone else and his range of conveying emotion are the reason people keep coming back.

In Sono’s film, Cage carries that recognizable bravado and yells his lungs out in that high-pitched voice as expected, but strikes an appealing balance between stoicism and vulnerability. A play that is much-rewarded by the end of this perilous journey, as it’s made clear that Sono himself is also a Cage Head. It’s also incredibly fun to see him bounce off the likes of Sofia Boutella and Horror icon Bill Moseley. Boutella is an underrated star who should be getting more leading roles than what’s currently being offered. When given the opportunity, as seen here, she can be both the heart and show-stealing bad*ass of a film. Moseley chews up every bit of the scenery, making for some of the most memorable beats. Practically every piece of the puzzle came together to make this a modern hit, except for one. The most obvious one that is often the downfall for films like this – those that are firing on all cylinders – the script.

To put it simple, Prisoners of the Ghostland is too much of a movie for its hour and forty minute run time. There are so many ideas, so many narrative threads that are compelling from the start, but end up getting dropped or glossed over. So much in the film will instantly grab one’s attention, to soon only feel like an afterthought. Half the time the viewer is scratching their head when something shocking or interesting ensues. The other half, one is just as surprised, but is in tune with the chaos of it all – just like the best of Cage’s latest work. This is perhaps the most confounding epic of recent, for both good and bad. It’s clear that much was already cut from the script. One could make the case that Sono wanted to play things slightly safer with this being his first English feature, as he has expressed interest in working in the states again. Perhaps he didn’t want to alienate the studio system by making a two hour long genre-bending fantasy?

It would be quite the decision considering just how far out the film already is. It’s a rare occasion where everything is operating on such a grand level that one wouldn’t mind spending more time with this story. This could have easily been ten to fifteen minutes longer, filling in that void that makes the final cut resonate like 3/4s of a movie. Much of this can be forgiven by how the rest unfolds in a spectacular fashion, though it can’t make up for certain pivotal moments that leave much to be desired. Still, Sono has carved one hell of a gem. Its Grindhouse-esque qualities will make this an excellent midnight flick for years to come. However, there is more in store for Prisoners of the Ghostland‘s future as it will soon be clear that modern cinema has rarely seen something as inspired and freewheeling as this.

Prisoners of the Ghostland premiered at the 2021 Sundance Film Festival.