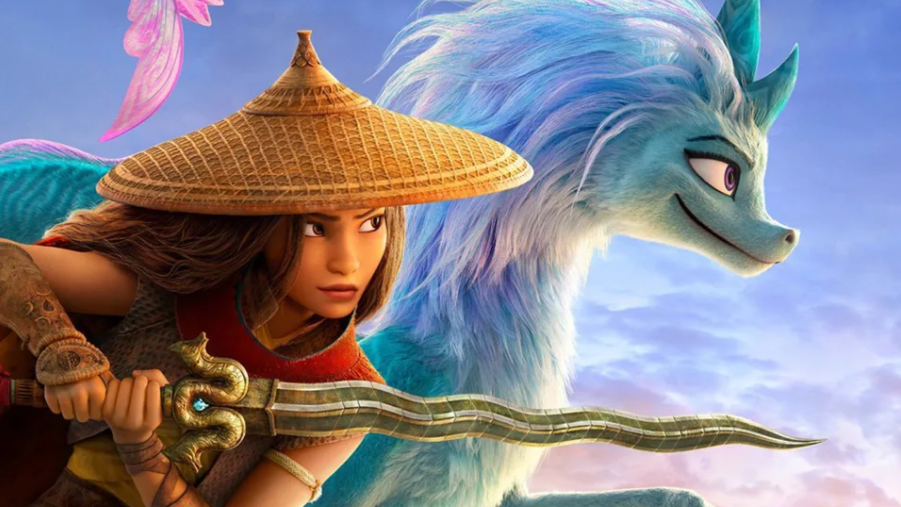 Disney’s latest feat, Raya and the Last Dragon matches classic storytelling with grand animation. Audiences follow the daring tale of hero princess Raya (Kelly Marie Tran) who must restore harmony to the ill-fated land of Kumandra by re-awakening the legendary dragon Sisu (Awkwafina). The film marks another milestone for Disney, being their first Southeast Asian tentpole film. Raya joins a pantheon of animated icons, setting “a high bar for a new generation of Disney princesses to follow.” All thanks to phenomenal filmmaking and an inspiring voice performance from Kelly Marie Tran.

In true Disney fashion, the visuals and style of Raya and the Last Dragon are intricately woven by its real-life inspirations. In Frozen, it was a Nordic setting. In Moana, it was a Polynesian one. With Raya, it’s Southeast Asia. The dragons in the film borrow heavily from Southeast Asian folklore and the land of Kumandra itself is even shaped like a water dragon, split in regions that respectively borrow from countries like Vietnam, Malaysia, Thailand, and the Philippines. Many of the film’s triumphs have been accredited to its all Asian voice cast – Tran herself leading the film as a Vietnamese actress – and its script by playwright Qui Nguyen and Crazy Rich Asians writer Adele Lim. Though two other deserving names are the directors themselves, Don Hall and Carlos López Estrada.

Understandably, the spotlight hasn’t been on these two as much because of the obvious: they aren’t Southeast Asian, Hall being white and Estrada being of Mexican descent. What could have been the biggest elephant in the room when discussing Raya is instead turned into a display of craft and understanding. The duo were specifically chosen to helm this project for their cinematic eye and capabilities. Disney is always at the forefront of striking new ground with animation, but keeping it still in line with their signature style is no easy task. Similar to what they have done many times in the past, the studio entrusted a Disney veteran with building the film’s epic scale while simultaneously introducing a bold new voice to the brand, and in this case, the new voice is just getting started.

Don Hall has been in the Disney family since Tarzan in 1999, working his way up as an animator and writer until finally marking his directorial debut with 2011’s Winnie the Pooh. He would go on to direct and win the Academy Award for Best Animated Picture with Big Hero 6 in 2015. He then worked on Moana as a co-director. Moving on to something as monumental as Raya, Hall felt an incredible responsibility telling this story. He is no stranger to guiding Disney milestones, which definitely helped in the making of. He went further into detail during the film’s official press conference.

Don Hall: “There were certainly moments during the making of the film where we were very aware of how this film, which was meant to be timeless, was unbelievably timely. And I think it emboldened us to continue forward because we felt like we had something to say. And if this film can just teach one person to be brave enough to trust somebody, then we feel like we’ve done what we set out to do.”

Following the success of Raya, all eyes are now on Carlos López Estrada. Many know Estrada from his breakout Sundance hit Blindspotting. An exciting, young, and out of the box filmmaker making a quick climb in the Disney family is quite shocking to say the least. He’s also built a repertoire for collaborating with today’s top music artists, directing videos for names such as Billie Eilish, Thundercat, Father John Misty, and Carly Rae Jepsen. Disney first announced Estrada as the director of a new original animated film (still on the way) in 2019, his inclusion in Raya was announced after in August of 2020.

Estrada is now a notable member in Disney’s Story Trust that collaborate on various projects, with his first credit being on Frozen 2 and his next on Encanto slated for this November. From indie cinema to a whole new world (no pun intended), Estrada is making waves in the studio and to have such an opportunity, especially as a rising Latino artist, is almost unheard of. Things are changing for the better, but the task of leading films with a massive reach like Disney’s comes with a just as massive responsibility. When it came to tackling Raya, he did not take this lightly.

Carlos López Estrada:  “I would just say that the most powerful thing I think film can accomplish is give someone an opportunity to experience life through someone else’s eyes, someone who gives you a perspective that you wouldn’t have. And Raya does that in a way that’s very optimistic, very hopeful. And through it, we get to learn about cultures that were not our own people, that were not our own problems, and it brought us together in a beautiful way. I think that if we’re able to bring a little bit of that light and a little bit of that empathy to people, we would. We’re just feeling so proud of this movie, this group of people that we’re working with, the time when it’s coming out. We feel like we’re adding something really valuable to a really important conversation.”

His unique directing style, completely visible throughout his previous work, sets the tone on how Raya can touch audiences around the world. A necessary input when directing a film that means a great deal to another culture. Fans will see his name two more times in 2021. As previously mentioned, he was on the creative leadership team for Encanto, Disney’s new fantasy set in Colombia. His next live-action feature Summertime – a Los Angeles set Slam Poetry Musical featuring 25 real-life poets – is also set to be released soon. It was met with praise last year at Sundance and is absolutely one to look out for.

Despite releasing a new musical and having his name associated with two Disney films, things will continue to go bigger for Estrada in the incoming years. With Raya done, he is now shifting focus on his own original animated Disney film – the one he was first announced to direct. On top of this, THR previously reported that he is also helming a live-action remake of Robin Hood for Disney+; an incredible sign of how much faith the studio has in this newcomer. Other classic remakes currently set for Disney+ include Peter Pan & Wendy and Lilo & Stitch. Estrada was asked about his exciting future during a recent interview with the LA Times En Español, and our friends at the DisInsider provided a translation. He first addresses his animated feature.

Carlos López Estrada: “It’s an original movie for Disney Animation, they haven’t announced it yet, so everything is confidential at this point but we know it will come out on 2023, it’s in development and we will start with storyboards, the music and the script in a few months.”

He couldn’t give more hints, and when it came to being asked about the live-action Robin Hood remake, he could only say less.

Carlos López Estrada: “For now it doesn’t have a release date, we don’t have plans for it yet. I hope one day we can continue with this project but for now I think they’re still figuring out some internal stuff.”

Fans should hold their breathe on Robin Hood for the time being. Other remakes are currently being pushed into production for Disney+ and Estrada still has an entire animated feature to lead. Nonetheless, the thought of it sparks great interest. Unlike other Disney classics, Robin Hood features a significant amount of leeway for creative freedom- due to it’s reflexive popularity. Estrada wouldn’t have to be so worried about adhering to the original’s legacy and could even make decisions that would be a departure from the brand, in the same vein as Jon Favreau’s Jungle Book. Whatever specific stories lie ahead for Estrada, Raya and the Last Dragon sends a loud message that this filmmaker is ready to shake up the house of mouse.