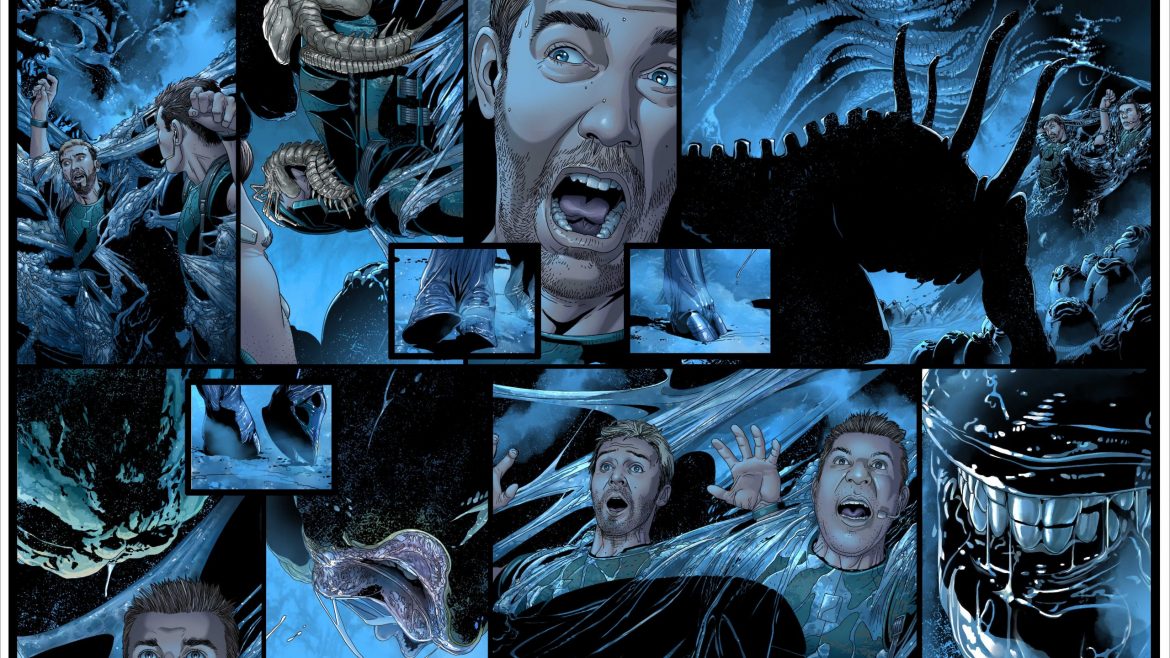 Phillip Kennedy Johnson is still somewhat new to the comic-book industry, but that doesn’t make him any less capable. After hitting the ground running with the start of his recent Superman/Action Comics run for DC Comics, Johnson has also taken on writing another popular alien over at Marvel, albeit a much more sinister one: the Xenomorph. The first of a new wave of Fox IP to hit Marvel comics, Alien will also be soon joined by the Predator series on the page. Currently on Issue #2, Marvel’s Alien launched earlier in the year to a great response from longtime fans, and as Johnson himself tells us, expect even more on the horizon.

Read as we dive into the new Alien comic with the scribe himself. We tackle all the lore with Phillip Kennedy Johnson and get to know what kind of fan he really is (the Alien franchise is one of the few to boast a niche array of fans). But above all, we get an idea of what it’s like to hold the keys to such an iconic title.

How is it to be one of the first people to touch the Alien franchise since Disney acquired Fox?

PKJ: It was a huge vote of confidence on the part of Marvel and 20th Century Studios, which I was super grateful for, but honestly, an even bigger thrill for me personally. I’m the biggest damn Alien fan alive, that’s just the truth. I could have gotten the call to do this at any time in the past 20 years and I would have been all caught up, ready to go, no research necessary.

Probably the most exciting part of it is that, with Marvel and 20th Century being part of the same company now, and the upcoming TV show being produced, we’re all adding to the same tapestry, collaborating to grow the Alien universe together in a way that feels super cohesive and consistent. Worldbuilding has always been my favorite part of writing, and playing in such a gigantic sandbox is unbelievably cool and rewarding.

Aside from the films themselves, where do you draw inspiration from while writing this story?

PKJ: The films are by far the biggest inspiration, but I also refer back to a lot of other Alien media, most notably the original Alien score by Jerry Goldsmith (the LP of which I sometimes listen to as I write) and Aliens: Salvation by Dave Gibbons and Mike Mignola. Aliens: Labyrinth is another one I come back to, to remind me how deeply upsetting an Alien story can and should be. Alien: Isolation is easily my favorite of the games.

This comic is set in 2200, after Alien 3. But are there plans to take Prometheus and Alien: Covenant into account? Or are there implications for Alien: Resurrection?

PKJ: There’s a specific image in Issue #1 that might make fans think of Alien: Resurrection, but generally that’s the one main-series movie I don’t give much thought, or even regard as “canon” in my heart of hearts. So no, there won’t be much Resurrection in the Marvel comic series. But I am a big fan of the prequel films, and Ridley Scott’s involvement quickly resolves any question of legitimacy. They’re part of the canon, no question. And although I have no immediate plans to do so, I do think there are some pretty cool ways in which we could tie those movies into the comics, and would certainly be game to do that.

The company, Weyland-Yutani, has always had evil implications and has had numerous characters display despicable actions over the years. How do you plan to write and portray them here, especially in today’s world?

PKJ: Weyland-Yutani is always portrayed as this mysterious, uber-powerful threat, and we always see them from the perspective of the blue-collar hero or the idealistic scientist, a plucky hero who has to overcome the machinations of the foreboding super-Goliath to survive. For this first arc, I wanted to finally see Weyland-Yutani from the perspective of a company man, someone who thought he was the good guy but realizes too late that he might not have been, after all.

Some of the themes and sub-plots that define Alien to me are 1) the incredibly striking and horrifying design and life cycle of the Xenomorphs, 2) the development of android technology and culture over time, 3) more recently, the relationships between mankind, our creators, and our creations, and 4) yes, anti-corporate themes, typically aimed at Weyland-Yutani. It’s a huge part of what makes Alien what it is, and it has to be there, even if it’s not at the forefront all the time. Later, we’ll see “The Company” from other perspectives, too. I’m fascinated with the concept of corporations that get so big they become as powerful as sovereign nations, and we’ll see some struggles with other powerful forces over the course of the series, as gets hinted at in Issue #1. But the history of the Xenomorph IS the history of Weyland-Yutani, and they’ll continue to be a looming presence, in some ways just as big a threat as the Xenomorphs.

Alien has had a number of human characters over the years in other media besides Ripley. There’s even a character with the surname Cruz, like Gabriel Cruz, in the game, Alien: Colonial Marines. How do you plan to write your human characters that make than unique from previous ones in the franchise?

PKJ: Because Ellen Ripley, Elizabeth Shaw, and others have cast such long shadows as the heroes of this franchise, I wanted a protagonist who was very different from them in pretty much every way, to avoid obvious comparisons to them, and so readers wouldn’t get the feeling that they’ve read this story before. Where Ripley and Shaw were lied to by the company and used as pawns, Gabriel Cruz is a lifelong Weyland-Yutani man. Where Ripley and Shaw were purely good characters, easy to understand and to root for, Gabriel Cruz is more complicated.

Some throughout his life might have seen him as a hero, others might have seen him as a killer or a cog in a malevolent company machine. He deeply cares about his son and is desperate to connect with him before it’s too late, but he failed him when it really mattered. He’s as tough a guy as we’ve ever seen in the franchise, and honestly, his younger self would be right at home in the context of the upcoming Aliens: Fireteam game. But his weaknesses are his love for his son, his knowledge that he failed him, and his self-awareness that he’s done some terrible shit in the pursuit of deeper answers about the Xenomorphs.

I guess what I’m saying is that I think most characters should be complicated in ways that make them feel real. The writer, at least, should know where every character came from, what they care about, and what they’re afraid of, so we can write them in ways that feel authentic, and so we can make the reader care about them before everything goes wrong.

How many issues do you hope to get for this run?

PKJ: I’ll happily write Alien as long as the fans want me to. I can promise they’ll never find a bigger fan of the franchise than me, and I have many, many more stories left in me. When I get the call to pass it on, I’ll be like Bill Paxton getting pulled into the floor, shooting in all directions, trying to get in just one more page before I die. (spoilers.)

Now, for the most important and final question: which do you think is better, Alien or Aliens?

PKJ: I get this question all the time, and it felt like an impossible one to answer at first because they’re both such clear 10 out of 10’s for me, and so different to boot. But the more I’ve thought about it, the more I’ve settled on the original Ridley Scott film. I can’t even imagine watching that movie for the first time anymore, let alone remember my reaction to my first viewing, but try to imagine watching that movie without knowing anything that’s in it. You’re seeing the Derelict, then the Space Jockey, then the Ovomorphs, then the Facehugger latched onto Kane’s face, and then the chestburster scene, all for the first time.

Then the full-grown xenomorph with that awful little set of jaws shooting out of its drooling jaws to hollow out your face like a bread bowl. Then Ash goes haywire and his damn head almost comes off and you have no idea what’s happening. As soon as the Nostromo lands on LV-426, you’re getting your mind blown every five to fifteen minutes, again and again and again. I can’t think of another movie that’s as effective in that way. James Cameron’s Aliens is perfect and an unbelievable accomplishment, but for me, the bar remains set by the 1979 Alien.

The first two issues of Alien are out now, issue #3 will be in stores May 26th