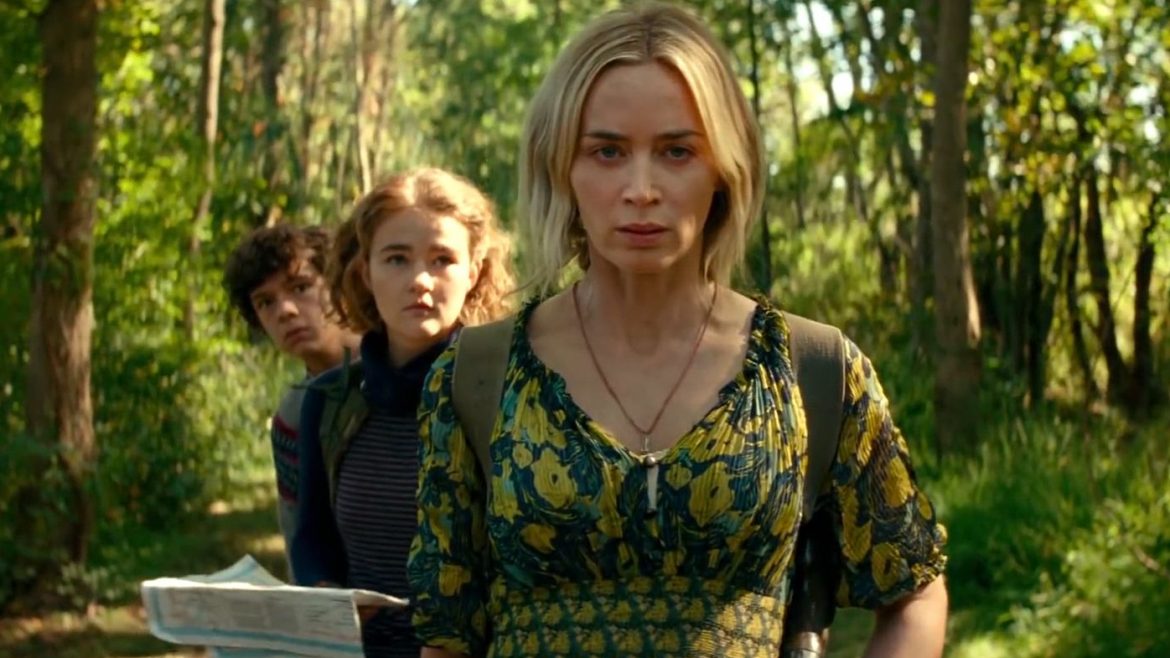 Originally set to release last March, A Quiet Place Part II was one of the very first films to face the harsh effects of the pandemic. In the months that followed, Paramount auctioned off many of their tent-pole films to streaming services (before the debut of Paramount+), but John Krasinski’s highly-anticipated sequel was always off the table. Now over a year later, it couldn’t be more clear why this film’s release has been saved for the return of theaters, there’s simply no other place to watch it. Overcoming the greatest fears of those who cherish the originality of the first film, A Quiet Place Part II is the kind of big-budget sequel Hollywood produces only every few years, and is very much worth the long wait.

The promotion leading up to the release has been recycling the same footage from the get-go, focusing on the flashback where the world first came under monster attack through the perspective of the Abbott family (complete with Krasinski himself) with a few other tidbits. To be fair, the studio can only show so much before getting into spoiler territory, and even after multiple delays, Paramount stuck to their strategy. All doubt goes away after the first few minutes because even after everything shown so far, the film proves to be an unpredictable experience. This truly isn’t the follow-up many are expecting, and it’s all the better for it.

Starting at this flashback, the story is put on a precise course of avoiding almost everything sequels shouldn’t do. An impressive feat on behalf of Krasinski, who now takes on sole writing duties aside from directing. Much of the original’s appeal comes from its simplicity. Mystery and suspense propel strong characters to the forefront, never over-complicating the plot or giving the audience too many definitive answers. Sequels more than often falter in this field, stripping ingenuity from their core premises by multiplying the initial threat and/or explaining too much of what already didn’t need to be explained. Especially seen in Horror, sequels tend to dive into unnecessary backstory, sometimes to the point where no mystique is left at all.

Now, A Quiet Place Part II‘s opening sequence does answer questions for this universe, but ever so slightly. In fact, it’s not so much about the past as it’s setting up the future (as proven soon after), leaving plenty of room for the viewer to still fill in gaps with their own imagination. Maintaining its signature level of ambiguity is one of this film’s greatest achievements. Even better, when jumping back to the present, the narrative is still about one thing and one thing only: survival. The Abbott family abandon their farm after the tragic loss of their beloved husband and father, but there’s more than one breed of monster lurking about. Enter Cillian Murphy’s new character, Emmett, who holds the fate of the Abbott’s lives in his hands.

Murphy slides into this narrative seamlessly, filling the void left by Krasinski’s screen absence, though not in a way that is ever awkward or forced. Murphy elevates every project that he’s in, and is more than up to the task of matching Emily Blunt’s screen dominance as Evelyn. Longtime fans will feel nostalgic seeing Murphy in another post-apocalyptic Horror, calling back to 28 Days Later. His sheer gravitas feels right at home in the genre, and it’s great to see the film capitalize on his talents. Even with his excellent addition, none of the leads in A Quiet Place Part II actually take a back seat. If one wasn’t already hooked to the vitality of the Abbott family, they surely will be now.

Blunt, who was first hesitant about doing a sequel if not for Krasinski returning to direct, delivers superbly as expected. She gets time to shine, except it’s under a different spotlight not seen in the first film. Murphy and Blunt may be the heavyweights here, but much of the film’s heart once again lies with Millicent Simmonds and Noah Jupe. After their first turnout, no one was doubting that they could carry their own. However, A Quiet Place Part II makes some of its strongest choices with the siblings, in particular. They are given the chance to grow into their own, even under unforeseen circumstances, and are responsible for the film’s highest thrills. Moreover, this film cements this series as more ensemble-driven, with each player regaining the focus whenever it feels like they may be getting sidelined.

Truth be told, Krasinski feels more in control at the wheel than he did before, be it from his absence in front of the camera or from experience. He pulls off a thrilling juggling act, making sure no lead character is wasted and is always progressing the plot – more praiseworthy when most of the characters aren’t even together for the majority of the film. From fluid camerawork to exciting cross-cut edits seen throughout its entirety, he is definitely more comfortable with making different choices here. Credit, of course, also goes to the first-class team at his back, like Legion cinematographer Polly Morgan. The duo chose to shoot on film, and low and behold, it makes a great and gratifying visual difference.

Almost perfect, one of the film’s critical missteps is wasting Djimon Hounsou. The actor, known from everything between Marvel, DC, and beyond, is far more deserving of leading parts, having never failed to shine when given the chance. His billing in A Quiet Place II adds to the excitement but doesn’t fulfill the promise. Regardless of his role being small, he feels more like a means to an end. Plenty of other minor cliches, such as characters making bad choices that will only result in making noise, are forgivable given how many steps are taken forward, yet seeing Hounsou’s talents underused in another blockbuster still leaves a slight sting.

Nonetheless, A Quiet Place Part II is a superior sequel that consistently keeps everyone on their toes, naturally adding to the original while setting the ground for what is sure to be an explosive Part III. A new spin-off is currently in development without Krasinski in the director’s chair, although his return is imminent with the release of this film. A Quiet Place Part II flies by at a breeze, and its final jaw-dropping moments will have people immediately asking for more. Many might call the ending abrupt, but it’s just following a peculiar path that’s a nice change of pace from the competition. An experience absolutely made to be seen in theaters, complete with exceptional visuals and sound, this series is on its way to becoming an even brighter spot in modern Horror, and this sequel is all the proof anybody needs.

A Quiet Place Part II premieres in theaters May 28