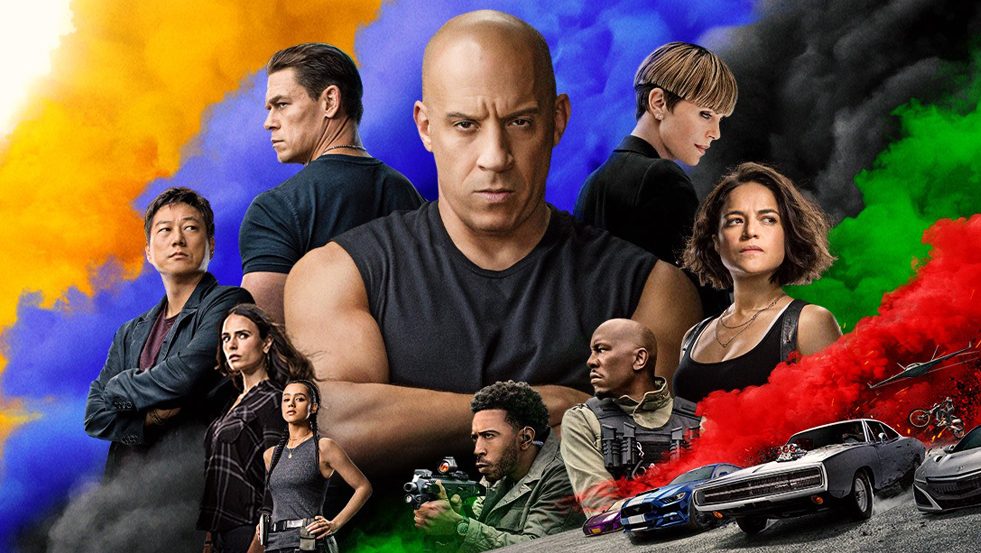 “My ass is en fuego!”, Tyrese Gibson yells at the top of his lungs as he drives across a minefield in the jungle. It’s the kind of nonsensical scenario we’ve all come to expect from the Fast Saga – Tyrese quips as he faces death, but not before the day is somehow saved by Vin Diesel’s Dominic Toretto (wearing only a plain white tee, jeans, and timbs) and a good ol’ nitro fuel tank. Everyone knows what they’re getting themselves into when paying to see a new Fast & Furious movie by now. Through strategic self-awareness and unequivocal charm, the franchise has grown into one of the most successful in the world. This same formula is present to the fullest in the latest installment, F9, and without any sense of irony, is just as effective. Call it a miracle but this series has yet to stray away from its core appeal, although it does reach risky levels here.

Justin Lin returns to the director’s chair after taking a break from the last two sequels, and it couldn’t be more welcomed. His specific influence, from Tokyo Drift to Furious 6, has been one of the few pivotal keys in launching this series sky high (quite literally). With the last few films ranging from decent to great, Lin’s return is a clear reminder that love it or hate it, the Fast Saga is actually far from over. Yes, the family soap opera plot is just as convoluted and melodramatic as ever. Yes, they also launch Ludicrous and Tyrese into the atmosphere (as seen in the trailers). How Lin pulls this all off while still making a coherent enough, satisfying blockbuster is no accident. Other storytellers may have gotten the chance to leave their mark with past films, but in case it wasn’t already clear, Lin proves to be the definitive F&F director with F9.

Set a few years after the events of The Fate of the Furious, Dom and Letty (Michelle Rodriguez) are now living a secluded life on a farm with his very young son. When Dom’s estranged brother (John Cena) turns up as a cyber-terrorist looking to settle a score from the past, Dom’s crew has no choice but to get back in the game. They set off on another globetrotting adventure, hoping to stop the mother of all cyberattacks that could send the world in total blackout, all because two brothers from East LA never said that they loved each other. With a story also written by Lin, this is exactly why this larger-than-life narrative doesn’t fail. He gives you exactly what you came for while still keeping everything anchored with, you guessed it, family.

This core aspect could have gotten old years ago, but everyone’s just as committed and John Cena’s inclusion further elevates the camp. F9 is surprisingly one of the more lore-heavy F&F features, exploring way more of Dom’s past and why we’ve never seen his brother this whole time. This deep-dive sets the film apart from the rest and is legitimately heartwrenching. The twists and turns are obvious only in their timing, as the Diesel-Cena dynamic excels in being more profound than just a selling point. Cena isn’t the first wrestler turned actor in this franchise, and the film is completely aware of this. Instead of trying to repeat the same magic that came with the Rock’s debut in Fast 5, Lin lets Cena do his own thing, forming a different kind of foe that is more human and less brick wall for Diesel just to plow through. Their relationship is rich, and it makes all the other lesser parts of the film more forgivable.

Though it should be noted that these lesser parts aren’t as damning as they have been in the past. The film gets a little too plot-heavy for its own good, ‘globetrotting’ is an easy way of putting it as we roughly go to a different country every other 10 minutes at one point. The end of the world plot device isn’t all the more interesting than the other MacGuffins Dom and the crew have chased after before. The machinations of Cena’s master plan eventually sound just like word jargon towards the end, as new caveats keep getting introduced – such as the revival of Han (Sung Kang), he slides back in naturally but is still part of the juggling act. On top of this, Charlize Theron’s returning villain, Cipher, makes everything a little too clear-cut. But even when all of these things add up, it can’t take away from just how god damn unapologetically entertaining this is. Despite its close to two and a half hour runtime, this doesn’t feel as bloated as it probably should.

The more interesting thing to discuss, and what could turn out to be a more damaging issue in the next two already greenlit sequels, is exactly just how self-aware F9 is. To be clear, the films have been growing increasingly self-aware over the past years in the sense that they know you want to see Diesel essentially play a superhero and give it to you. Throughout F9, the characters begin to grow this awareness in-universe, steering more into meta territory. This is actually pretty hilarious on multiple accounts, as it’s expressed the most by Tyrese, but you can definitely start to feel how dangerous it can be for the franchise’s signature formula. Everyone knows that the films and people making them are self-aware, but when it’s quite literally being spelled out on-screen, it’s not so much tongue-in-cheek anymore as it is lazy and insincere.

Thankfully, F9 only dances around this element and Lin refrains from going full meta, actually using this theme to boost some of the film’s more hilarious and, believe it or not, climactic moments. It does make you think, however, just how further can they go with this? They have already teased about taking Dom and the crew literally to the Moon and back… will it feel as genuine or lose its spark by the end? Even with all of its issues, Lin crafts one of the most intimate and earnest F&F sequels to date, making you fully trust that if there’s anyone to take Dom Toretto to space and give it justice, it’s Justin Lin.

Suffice to say that this rating of F9 comes from the heart. Is it predictable at times? Sure. Is it a bit overstuffed? Absolutely. But Tyrese has still got it, the familial love is stronger than ever, and #JusticeforHan is only just beginning. Longtime fans will walk out more than pleased, and if you’ve been craving that feeling of sitting in a theater and going from instant laughter to tears, this will get the job done.