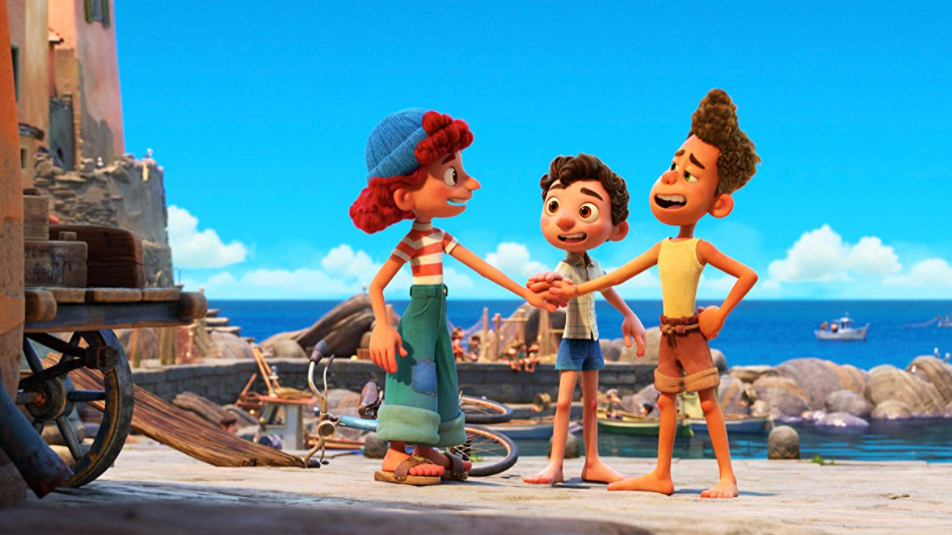 Releasing on June 18, Pixar’s latest film, Luca, has a little bit of something for everyone. From intense chase scenes to delectably detailed pastas and gelato, there’s a lot to enjoy throughout – but nothing comes close to the joyously well-realized relationships between the main character Luca and his fellow sea monster best friend Alberto, as well as their human companion Giulia.

From the earliest stages of the filmmaking process, director Enrico Casarosa wanted Luca to dive into the nature of childhood friendships. At the global press conference for the film, Casarosa said “It really made me think about how much we find ourselves with our friendships, or how much friendships help us find who we want to be.” To this point, Casarosa took inspiration from his own upbringing and childhood friendships to bring these characters to life. “I was a shy kid, a little bit sheltered by my family. And when I met my best friend at 11, my world opened up.” In many ways, Luca’s journey in the film mirrors that of the director’s experience growing up on the Italian Riviera.

Jacob Tremlay, voice of Luca himself, described his characte’rs journey; “[Luca] is a bit more of a timid kid. He wants to be able to explore the human world but his parents have a lot of restriction for him. But he meets his great friend Alberto, who helps him step out of his comfort zone.” Alberto, played by Jack Dylan Grazer, is on the other end of extroverted spectrum. “The aspect of curiosity is across both [Luca and Alberto], but Alberto has no restrictions” Grazer said. “He’s a huge part in inspiring Luca to go to Portorosso.”

Casarosa described Alberto as “someone who pushes you off a cliff” to overcome your own fears – a big theme of the film. “Enrico and I keep saying you surround yourself with some Albertos,” said producer Andrea Warren. “I hope that some of those messages really reach the audiences, and especially reach kids.” Developing their friendship was important to furthering their message of eliminating self-doubt and fears, but it also introduced a new interesting dynamic that was not foreseen.

While developing his short La Luna, Casarosa realized that Pixar had never done a film about “kids actually being kids.” As an inspiration to this idea, he referenced 1986’s Stand By Me – a classic coming-of-age film following a group of boys growing up in the Pacific Northwest based on the Stephen King novella The Body. Developing the concept of childhood freedom and innocence, Casarosa focused on giving his characters time to breathe. As such, the protagonists of Luca spend much of the film simply reveling in each other’s company and exploring the world around them.

The director also pointed out that the age and maturity of the characters was important in crafting this kind of lighthearted, care-free tone. “It’s also specifically a little pre-romance,” he said. “There’s that moment that maybe we’re not thinking about boyfriends or girlfriends yet, which is really more about the friendships.” It feels appropriate to say that Luca, as a film, is defined by its on-screen friendships.

When the first trailer for Luca dropped, many saw a deeper kind of relationship between its characters, something behind the on-screen display of friendship. The brightly colored buildings and distinct appearance of Ligurian architecture reminded many of the 2018 Best Picture Nominee Call Me By Your Name, and imbued in them a hope for similar representation in family entertainment.

Although the director’s intentions are clear in a strictly non-romantic take on childhood friendships, the film is still largely open to interpretation. Maya Rudolph, the voice of Luca’s mom, commented on the kind of special relationship seen between Luca and Alberto; “You have those people that you just hook into and you fall in love with in the best, most lovely, possible way. Because you see those things in each other, and it’s just kind of like your summertime romance.”

And there’s more to come. When speaking about the future of similar close on-screen friendships at Pixar, Enrico Casarosa said, “We also don’t see enough of girls being close. But luckily we have a wonderful movie coming next year from Domee Shi, Turning Red, about the coming-of-age of a girl.” From the director of animated short film Bao, the film is the next on the studio’s slate, scheduled for a 2022 release. “That’s something that I love about Pixar; we can find diverse movies from different voices and we’re starting to really embrace the effect that they can look a little different and have a different tone.”

Read Next: How Pixar Made ‘Luca’ from Quarantine to the Seaside