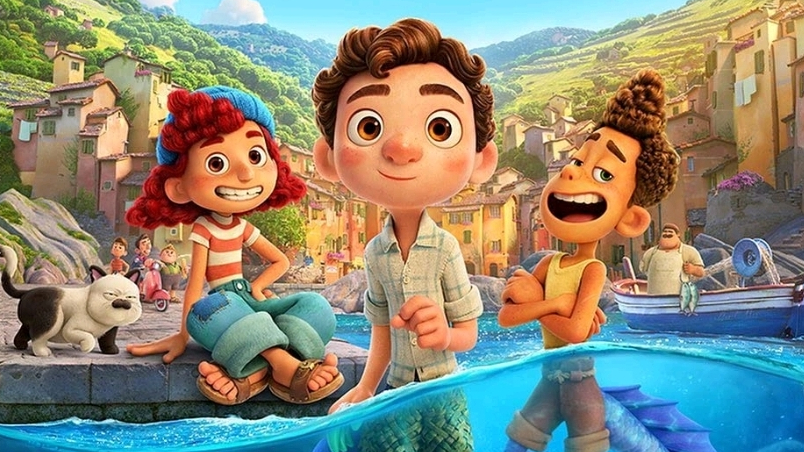 With the upcoming physical release of Pixar’s Luca, which premiered on Disney+ earlier this summer to major critical acclaim, we have teamed with Disney & Pixar to debut an exclusive clip from the upcoming bonus features section!

In this exclusive bonus clip, titled Unique Architecture, the Pixar art team showcases their research trip to Italy in the far efforts they went to find inspiration on the design for the film’s location, within the real-life scenery of the Italian Riviera. This includes exploring the Italian Piazza to identify organic Italian architecture and lively color palettes that they could bring to (animated) life in Luca.

As the clip features side-by-side shots of a real-life Italian Piazza and the Piazza seen in Luca, it can be seen how the filmmakers and art team put in a substantial amount of effort to ensure that the depiction of the Italian landscapes were as accurate as possible.

This includes, as shown in the clip, going as far as to highlight minor details such as clothes hanging outside of windows, a minor attribute but common in the Italian Piazza in which they visited, which helped in making Luca feel even more authentic.For those who have not yet seen Disney and Pixar’s Luca and are excited to pick it up on Digital, 4K Ultra HD, Blu-ray and DVD on August 3, the film follows a coming-of-age story set in a seaside town on the Italian Riviera about a young boy experiencing one unforgettable summer. Luca shares his amazing adventures with his friend Alberto, but their fun is threatened by a deeply held secret: they’re sea monsters from a world below the water’s surface.

Our Italian Inspiration – Experience the joy of discovery as Pixar artists travel to Cinque Terre, Italy, to absorb the beauty and culture of the coastal region which inspired the characters and the quintessential Italian backdrop of Luca.

Secretly A Sea Monster – Explore the artistry and technical innovation of Luca’s transformation from sea monster to human, and how the theme of transformation is central to the emotional journey of the main characters.

Best Friends – Best friends can challenge us, inspire us, annoy us, and encourage us. The cast and crew of Luca share their own stories about how besties influenced their lives, and how those experiences informed the creation of screen pals Luca, Alberto, and Giulia.

– Starfish Hunt (Alternate Opening) – Luca explores the shore and the sea, gathering mussels and starfish, in this serene alternate opening to the film.

– Festa Del Mare – The boys go to a festival filled with fun…and danger.

– Here Comes Giulia – Giulia explores Isola Del Mare, where she meets Luca and Alberto, and asks so many questions.

– Gelato Trouble – Giulia offers to treat Luca and Alberto to something called “gelato.”

– Sea Monster Cannery – Luca dreams about a magical place filled with Vespas and gelato, but things aren’t quite what they seem.

Luca will be available to own on Digital, 4K Ultra HD, Blu-ray, and DVD August 3!

Our ★★★★ review of the film: A Love Letter to Childhood Summers