Home » Captain Carter Confirmed to Appear in Future Seasons of ‘What If…?’
NewsTV

Captain Carter Confirmed to Appear in Future Seasons of ‘What If…?’ 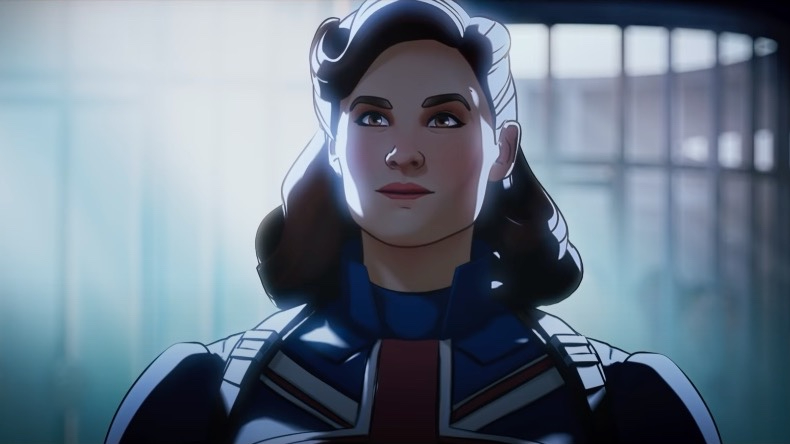 The Marvel Cinematic Universe just brought its Infinity Saga to an official close, but the next great act in this grand story is just getting started. Not properly titled by Marvel Studios just yet, fans everywhere are dubbing the current events of Phase 4 as the “Multiverse Saga.” Hot off the finale of Loki’s first season, What If…? promises to explore the vast branches of this new growing multiverse, where the possibilities are unbelievably endless.

Starting off Marvel’s first venture into animation is a tale set in WWII. Or more accurately, a retelling of Captain America: The First Avenger where Hayley Atwell’s Peggy Carter gets the super soldier serum instead of Steve Rogers. It’s a very simple and charming story to introduce this high concept show to interested viewers, but it doesn’t seem like the story of Captain Carter is going to end when the credits roll on the series premiere.

We were privileged to just attend the What If…? virtual press conference this past week, where we got to discover a number of interesting tidbits about the creation and future of the animated anthology series. One of the more notable things teased by Executive Producer Brad Winderbaum is that Captain Carter will appear in every future season of the show, meaning her world and story will be revisited more than anyone previously thought.

“We realized, I think, early on in development as we were starting to get [Headwriter] A.C. Bradley’s scripts and starting to look at the arc of the series that there was going to be a character that bubbled up and became more important,” Winderbaum explains. “Not more important than the rest, but had a strong relationship with The Watcher, who is really our driving force behind the series, and that’s Captain Carter.” A great but surely welcome surprise, as Hayley Atwell has proved to own the Peggy Carter role down to every detail and is always deserving of more time in the spotlight.

The first season of What If…? hasn’t even hit Disney+ yet, but that didn’t stop Winderbaum from talking about the already confirmed season 2. “We realized as we started developing the second season that Captain Carter was going to be the character who we would revisit in every season and continue that adventure. Obviously, we’re telling a story on a giant multiversal canvas so you never really know who’s going to pop up where and when. It’s very much an anthology, but there’s always opportunity for fun connections to be made.”

The implication that the series has an important overarching story in the MCU canon is one thing, but confirming that Captain Carter is going to receive her own fleshed out arc over multiple episodes opens up a number of possibilities for the series, specifically pertaining to the knowledge that none of these stories have to be over by the time the episodes end.

This, of course, also opens the door to the idea of some of these multiversal interpretations appearing in live-action. It may be too early to assume so, although with this being Marvel’s first fully animated project and with its dedication to keeping its stories on Disney+ as integrated to the theatrical films as possible (with Doctor Strange in the Multiverse of Madness on the way) – you can honestly never say never with such endless potential. A true testament to Marvel’s original ‘What If’ comics. Stay tuned for more coverage on What If..? right here on DiscussingFilm.

What If..? premieres August 11 on Disney+