Home » ‘Free Guy’ Review – One For The Gamers
Film

‘Free Guy’ Review – One For The Gamers 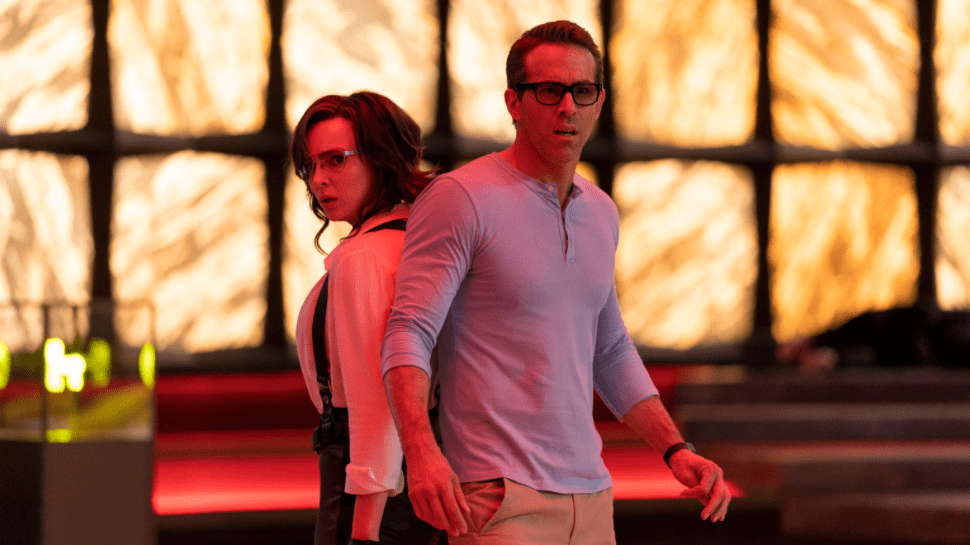 You could call Free Guy a cross between The Lego Movie and Wreck-It Ralph, with dashes of The Truman Show sprinkled throughout, though the jury is still out on how much of the latter movie’s DNA can be found in Shawn Levy’s latest. Guy (Ryan Reynolds) is a bank teller in Free City, an open-world video game published by Soonami, and a non-playable character among dozens of colorful, dastardly personas playing in Free City’s sandbox. Guy lives the same routine day in and day out, seemingly destined to live this way forever.

Thanks to a software developed by programmers Millie (Jodie Comer) and Keys (Joe Keery) being secretly inserted into Free City by Soonami head Antwan (Taika Waititi), Guy becomes self-aware and is in a race against time to save the game before it gets shut down. Reynolds swaps out the Deadpool suit and the edgy anti-hero characteristics for a full blown hero, complete with name tag.

Ryan Reynolds is… well, Ryan Reynolds. He’s a friendly, excitable inhabitant much like the other citizens of Free City. Guy knows everyone and everyone knows him. He grabs a decaf every morning before work and loves “Fantasy” by Mariah Carey, you can already see where this is going. But where the film truly thrives is in its co-lead and supporting cast. Where Jodie Comer’s Millie is an American programmer in the real world, in Free City she’s Molotov Girl, her tough-as-nails avatar with a British accent.

Molotov Girl scours Free City to find the hidden code of her original game ‘Life Itself’, after it was acquired and then cancelled by Antwan. Jodie Comer steals the show, ready for anything that comes her way. Where Guy is just learning how to defend himself against gunman and other foes for the first time, Molotov Girl is a seasoned and skilled fighter with a huge arsenal of tools and weapons.

Joe Keery and Utkarsh Ambudkar play Keys and Mouser, two other programmers at Soonami. Ambudkar and Keery have a solid rapport with each other, having their own personas in Free City as well, with Mouser’s being that of a pink bunny. Buddy (Lil Rel Howery) is the security guard at the bank and Guy’s best friend, living the same day over and over with him, dropping his holster belt and dropping to the ground the moment a robber shows up every time. Howery mostly acts as a kind of straight man trying to keep Guy in check, but is among the funnier characters of the movie, asking existential questions like what he’d look like as a ghost if he were dead.

Free Guy technically marks the reunion of Taika Waititi and Ryan Reynolds for the first time since co-starring in 2011’s Green Lantern, yet they don’t actually share any scenes together, which feels like a bit of a missed opportunity. While it’s fun to see Waititi play a bratty CEO like Antwan, his comedic talents feel ultimately wasted. He doesn’t enter Free City himself, where most of the other characters have their own personas in the game, making you wonder what could have been.

Some interesting questions and life lessons are raised, such as the ethics behind deleting the first artificially intelligent lifeform and what it means to be independent, free of the influence of others, but these things are buried underneath so much comedy and explosions that they feel thrown to the wayside and hardly realized in any meaningful way. In a time of blockbusters mostly devoid of romance, it’s surprising to see Millie and Guy as an item; Reynolds and Comer are very cute together and their chemistry elevates the film.

Still, just like the Free Guy‘s themes, the romance at its center also could have been slightly amped up. Both are things you wish were given more focus. On the other hand, gamers are sure to be delighted by the many video game references and Easter eggs, including streamers like Ninja and Pokimane, among others. In the end, Free Guy is just a fun summer movie that’s sure to leave you singing Mariah Carey on your way out of the theater.