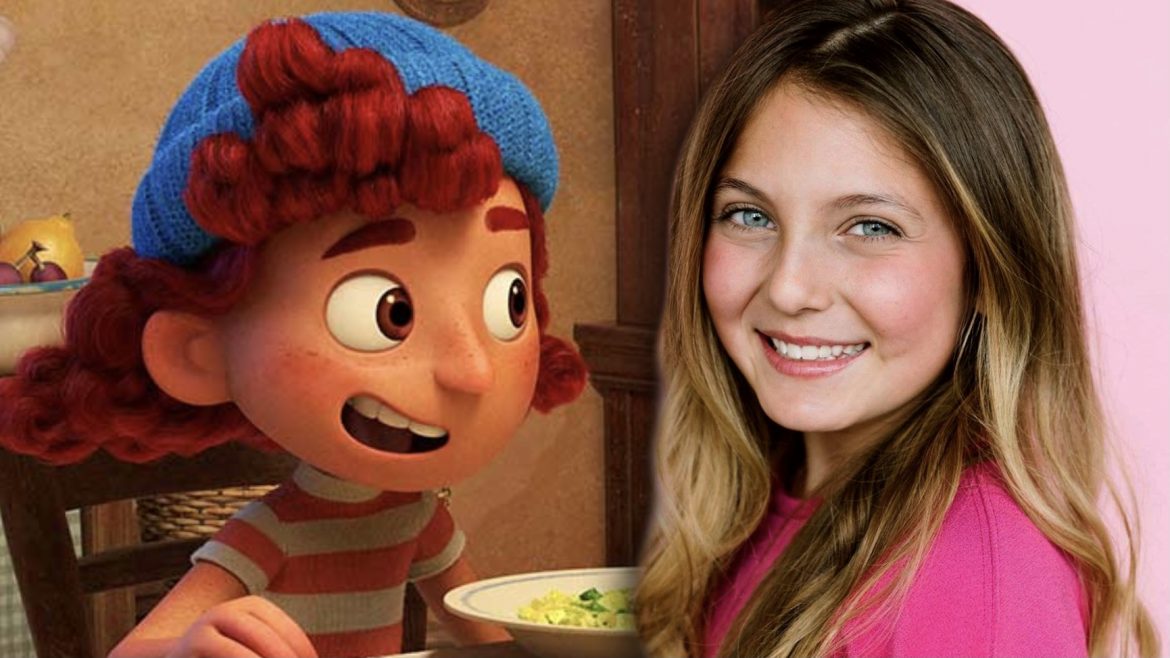 With a long-held passion for acting and theatre, Emma Berman still can’t get over the fact that she is in a Pixar movie – not that anyone can blame her! She is the voice of Guilia Marcovaldo, a young girl in the Italian town of Portorosso, in Pixar’s Luca. Sharing the spotlight with Jacob Tremblay’s titular Luca and Jack Dylan Grazer’s Alberto, you wouldn’t even know that this is her first major role. With the same outgoing, jovial spirit as her character from Luca, she is nothing short of charismatic.

We were able to catch up with Emma Berman at the pop-up Pixar Putt mini golf course in New York City to celebrate the home video release of Luca! The course, which will be open at Pier A in Manhattan’s Battery Park until October 31st, features holes themed around everyone’s favorite Pixar animated stories and characters. In between a few rounds of putting, we asked Berman a few questions for an exclusive interview.

We are here at Pixar Put in New York City; have you tried your hand at the course yet?

Emma Berman: I have done the Luca hole. It took me some time some practice, but I did that one.

Now that Luca is out, how has it been having having the world see it?

Emma Berman: It’s been so absolutely incredible. I’m just so honored and I’m so grateful that Pixar trusted me to voice her. This is just such an awesome opportunity. I just I couldn’t be more happy and more honored.

And this is your first major role.

Emma Berman: Yes, this is my first bill.

What was it like? Being at the front of a Pixar movie?

Emma Berman: Crazy. It’s a dream come true. Because me and all my friends, you know, we grew up watching these movies – watching Disney and Pixar. And it’s just so incredible that my voice is actually in a Disney movie. That’s crazy.

Right? How did you go about wrapping your head around that and getting into the role?

Emma Berman: Well, at least for the Italian, I did some research. I went to my local Italian restaurant in San Francisco, Trattoria Da Vittoria, and there I met this waiter and he had an extremely strong Italian accent. I think he came from Italy like a year ago, and so he had a really strong Italian accent. I got his phone number and we did some Zoom sessions, and he was teaching me some of the Italian. So that’s how I got more into the vibes and just the melody of the Italian language. So kind of like wrapping my head around the Giulia Italian.

How long did it take you to feel confident in your Italian enough to record?

Emma Berman: I mean, I was still working on the Italian as I was recording, and I’m still kind of learning, going to my Italian restaurants trying to read the menus and stuff. So I think I never really stopped.

So what other kind of research did you do to find yourself inside that culture?

Emma Berman: I tried listening to some Italian music and I think that really helped with the melody of the language – just getting the melody of the talent language because it’s so harmonious. It’s melodious, so beautiful. I had a lot of pasta. So yeah, I just kind of I met that waiter at the Italian restaurant and he helped me a lot and I met another Italian teacher.

And a lot of the inspiration from director Enrico Casarosa, he’s mentioned Ghibli movies. Did you did you find yourself exploring any of those?

Emma Berman: I did not. But I do plan on watching them definitely.

I would recommend them highly. I have a note written here about TikTok fan art of Luca – have you found yourself looking at any of that?

Emma Berman: I have. I’ve seen so much awesome, on Instagram and TikTok and just everywhere, some beautiful Luca fan art and it inspires me to draw some stuff from the movie too. I have like random doodles of the characters in my notebook. The drawings on TikTok and on social media, they’re just so so beautiful! Sometimes in my tagged photos, I look and I’m like, “Whoa, that is so good.”

One thing I find really interesting is that Luca is very much about going outside of your comfort zone, and sometimes sharing your art can be like that. What was some of the stuff that you’ve seen people taking away from this movie or yourself?

Emma Berman: I think something that at least my character can inspire and teach us all to be is a hard worker, because she’s so passionate, and she just doesn’t stop going. She doesn’t stop with her dream. She just keeps pushing and keeps working hard. I think that’s definitely something very inspiring that we can all learn from the movie. Then there are the beautiful messages behind it, like never judging yourself, never judging others by how they look… and Silencio Bruno (laughs)!

Moving forward with COVID-19, we’re going back out into the world as things are reopening – some people are being brave and starting to do the things that we love again. What are som e of the things that you’re most excited for as the world starts to reopen?

Emma Berman: I am so excited to not only maybe go and watch theatre, but to be a part of theatre because that’s how I got my start in acting. I started through musical theatre and it would just be so fun because Broadway is closed down and I’m in New York right now. Just to continue doing musical theatre and continue watching shows.

Yeah, and on the subject of theater, I hear you sing, right?

What are some of the musicals you’ve been in?

Are you looking to pursue that further? Maybe in a movie musical?

Emma Berman: I would love to do that. I’ve seen a lot of those and they’re so inspiring. They’re so beautiful.

Do you have any any upcoming movie plans?

Emma Berman: Not for movie but I am currently working on a voiceover role for a TV animated series right now.

What is your favorite non-Disney movie?

Emma Berman: My favorite non-Disney movie… I’m a big Fast and Furious fan. I really like that series, all of those!

I have yet to see the new one.

Emma Berman: Oh, I just recently watched it. So cool.

What did you think?

Emma Berman: I loved it. I think one of my favorite parts is just like watching the cool explosions and everything.

Own Pixar’s Luca on 4K/Blu-ray today!