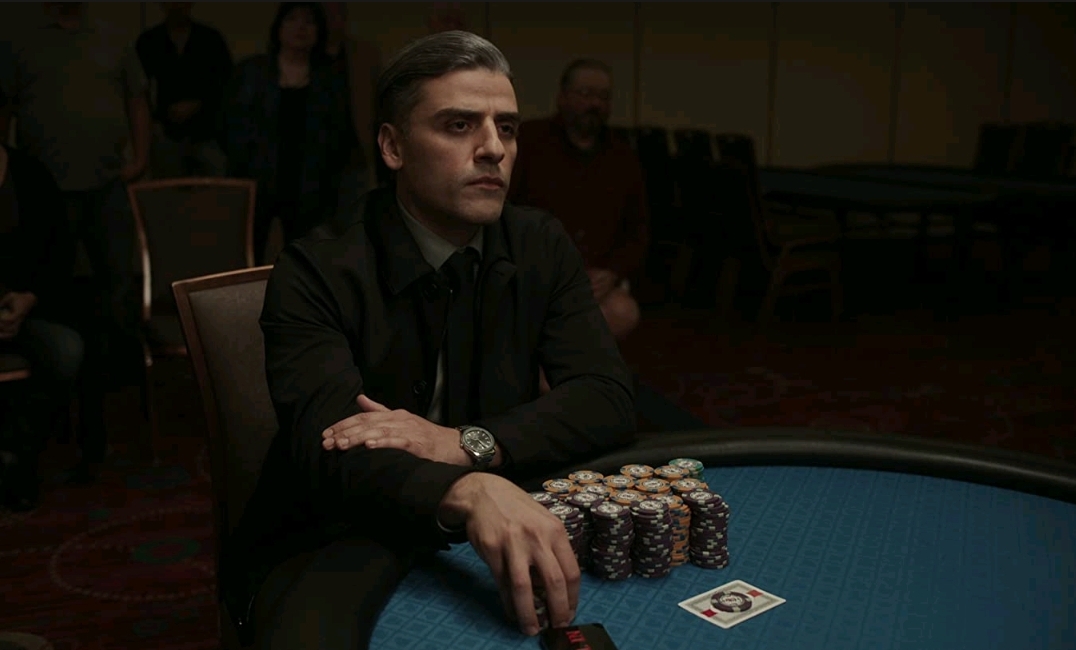 There have been very few films this year that have been as surprisingly dull as The Card Counter. Surprising not necessarily because you expected it to be a game-changer (the lacking trailers sell more excitement than what’s actually delivered here), but because you can’t believe that someone as talented as Oscar Isaac couldn’t salvage most of it. Coming off what is perhaps one of the most treasured indie powerhouses of recent, A24’s First Reformed, director/writer Paul Schrader’s latest is misguided and most of all, hard to sit through.

The Card Counter follows a former military interrogator, scarred with PTSD from his days stationed at Guantanamo Bay, who now spends the rest of his days going from casino to casino counting cards. He endured the fate of a government patsy, teaching himself the ins and outs of a 52 deck while serving prison time for all the exposed violations of human rights (various methods of physical and mental torture) he was taught to inflict on prisoners at Gitmo. The film doesn’t paint him as a monster, but a lost soul who’s had all his innocence stripped away by political corruption. A complex role worthy enough of Oscar Isaac’s ferocity, only to be instead visualized in the most monotone way.

To be fair, this downfall isn’t entirely on Isaac, who is clearly trying to make the best out of this gig. That’s exactly what this feels like, just another job for the booming actor to pass the time as everyone waits for the better stuff to come. This isn’t a dig on Isaac taking on smaller projects, it’s a desire to see this man in more layered leading roles. The part plays like Schrader on autopilot, narrating snarky and blunt dialogue in ways that you’ve seen done more exciting in the past. The first act is the biggest indicator that this filmmaker, who’s had a huge hand in some of the most notable works in American cinema (Taxi Driver, Obsession, Raging Bull, etc.), is just simply out of his element. If you’re brave enough to stay on for the whole ride, this notion will prove to get worse.

The narrative shows more of its true intentions when the supporting cast kicks in. Tye Sheridan plays the son of another patsy who served time for illegal interrogations. He crosses paths with Isaac at a casino and the two discover that they have a shared enemy: Major John Gordo, played by Willem Dafoe in merely a few scenes. Gordo was one of the handful of leaders overseeing all of the Gitmo war crimes, bringing in more and more unknowing American soldiers into the fold. Being a man of high interest, he of course walked away hands-free, never seeing a day behind bars. Sheridan and Isaac play a tug of war on whether or not they should take revenge, which inspires Isaac to take his card counting to the big leagues, with the help of another player in Tiffany Haddish, in order to raise enough money to set Sheridan on the right path.

If that sounds like a whole lot of plot to you, well that’s because it is. Schrader aims high, and although this might come off as admirable to some, it still results in a viewing experience that feels like you’re constantly switching back between two separate movies. One aims to be a deep dive into the world of competitive gambling while the other is a more straight, political crime thriller. Schrader’s script may have a faint spark to it, yet most is lost in his visual translation – making these two intertwining worlds not interesting enough to keep up with even on their own. Uninspired and repetitive editing, unnatural dialogue, and awkward sound mixing are the biggest culprits. This may seem like being harsh just for the sake of being harsh, however, when you witness great actors read the same mundane lines to each other over and over again in silence, then you’ll get it; “Oh, they’re just as uninterested too.”

The Card Counter is sprinkled with moments of brief fascination. The little screen time that Willem Dafoe does have, in particular, is what you’ll probably remember the most. Schrader uses a disorienting fisheye lens during flashbacks within the walls of Gitmo, portraying heinous actions in a way that is obviously supposed to come across as hazy and haunting. These segments will surely get your attention, as they’re the most distinct in an otherwise bland film, and yet you still can’t help but question what you’re seeing. The parts of The Card Counter that do pop out are still somewhat hallow, for it’s not quite clear what Schrader is trying to sell except for the obvious. When even the most dramatic images on-screen fail to get a slight gut reaction, it becomes clear that Schrader wasn’t fully equipped to tell such a delicate story.

Whatever entertainment there is to be found here is thanks to the talented cast sticking it out. The small percentage of The Card Counter that shows potential is painfully overshadowed by the rest. Not a film worth seeking out unless you’re a true Paul Schrader or Oscar Isaac completionist, and even then there will still be very little to gain. If anything, you’ll be able to see how having high grade talent, both in front and behind the camera, doesn’t automatically equal greatness, and how even today’s most talked-about artists can place the wrong bet and be attached to something that honestly feels amateur.

The Card Counter premiered at the 2021 Venice Film Festival. The film releases in theaters September 10!