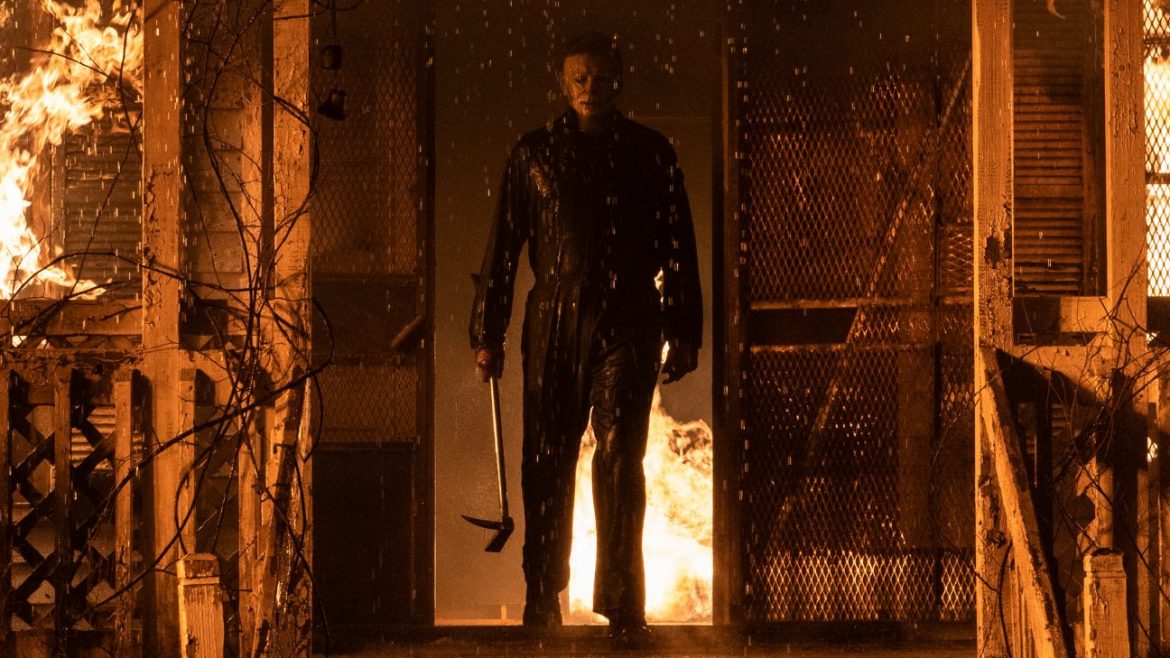 John Carpenter’s revelatory 1978 horror film, Halloween, spawned a slew of sequels that have extensively varied in quality. It wasn’t until 2018’s Halloween, directed by David Gordon Green, that any film had come to being nearly as good as the original. Green’s “legacy” sequel was a commercial and critical success, leading to the announcement of two more follow-ups. Now after the long wait, the next continuation, Halloween Kills, is here and is just as good as its predecessor, but it takes the slash in “slasher” up to a thousand and it’s all the better for it.

Halloween night, 2018. Michael Myers (James Jude Courtney) burns in the basement of Laurie Strode’s (Jamie Lee Curtis) house. The town of Haddonfield is blissfully unaware that the Boogeyman, that has haunted them for over forty years, is trapped in a burning tomb. Thus, the fire brigade is sent to extinguish the flames and save any survivors. Of course, everything goes downhill. Michael manages to escape, in brutal fashion, and makes his way back home once more, cutting through as many bystanders as he can find.

Halloween Kills is a non-stop, blood-rushing blast. David Gordon Green takes the brutality of his 2018 film and amps it up, breaking the dial in the process. Michael literally mows his way through the entire town of Haddonfield, no character, big or small, is ever safe. There are some absolutely gnarly kills that will become ingrained in spectators’ minds. It’s shocking to the highest degree. In terms of the film’s scare factor, audiences will be undoubtedly biting their nails in anxiety. Green successfully keeps the viewer on edge as one anticipates the sudden arrival of Michael’s cold knife piercing through his next victim.

What makes Halloween Kills differ from 2018’s Halloween is the fact that it’s less about Laurie Strode. Along with her granddaughter (Andi Matichak), many familiar faces from Laurie’s past return and take center stage. By bringing in this extensive range of supporting characters and killing them off one by one, it’s made abundantly clear that Michael Myers is truly unstoppable and that it won’t be known as to who will be making it to the next film alive until this one’s very end. No one can escape the Boogeyman.

In terms of its filmmaking, Halloween Kills is a compelling horror delight. It plays heavily into the audience’s fear of darkness as cinematographer Michael Simmonds blasts strong beams of light to contrast the emptiness of each scene. Despite being clearly modern, a large majority of Simmonds’ visuals evoke Dean Cundey’s original style. The frequent use of zooms elevate the ongoing, endless amount of dread in the atmosphere. Pairing with the film’s cinematography is the crisply loud and fear-invoking sound design which, as always, is incredible. But the cherry on the top is John Carpenter’s new rendition of his classic Halloween theme, it’s just as chilling as ever.

However, the film isn’t without its flaws. Scott Teems, Danny McBride, and David Gordon Green’s scripting is perhaps the biggest example. Likewise, this was the standout flaw of the 2018 film. There is something inauthentic and occasionally farce to some of the dialogue, especially at the start. Admittedly, Halloween Kill‘s screenplay gets better as it moves along and is best when all hell is breaking loose. As a slasher, naturally, its best moments are when Michael Myers is chopping down his victims. One can overlook the somewhat archetypal scripting flaws thanks to the sheer entertainment factor of the film.

Ultimately, the new avenues that David Gordon Green takes with introducing a wider cast of characters are very welcomed, especially as it emphasizes the sheer inhumane and indestructible nature of Michael Myers. It also goes away from the somewhat frustrating notion that Michael is simply after Laurie Strode and nothing more, when it’s clear that is not his intention. Halloween Kills explores the myth of Michael Myers in a twisted and more psychological manner as his true nature as an inexplicable force is further made explicit.

Halloween Kills is a blood-filled roller coaster of a film. Not only will it leave everyone yearning for a conclusion, which they’ll get, but it also leaves a lasting, memorable impact.