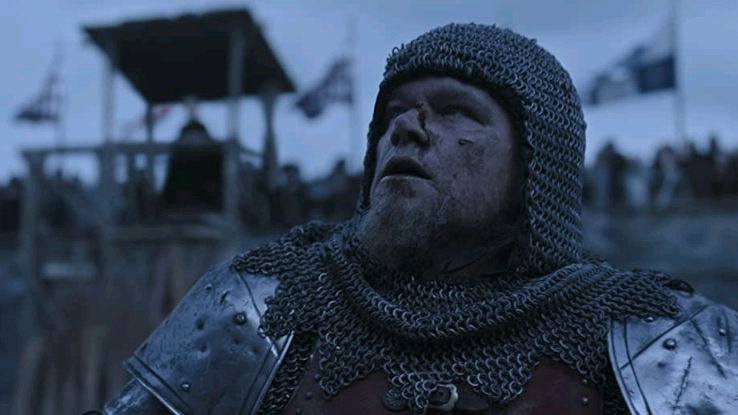 Written by Nicole Holofcener, Ben Affleck, and Matt Damon, The Last Duel is a medieval tale based on the French cultural legend of Marguerite de Carrouges, a woman who demanded justice after being sexually assaulted by her husband’s former best friend in a time where women faced life-ending consequences for speaking up. As a result, her husband, the noble knight Jean de Carrouges and prominent squire Jacques Le Gris fight to the death to finalize a verdict for the case.

The latest from director Ridley Scott, the film subverts a traditional narrative structure with a start, an end, and three chapters in-between. Each chapter shifts the perspective from the three integral characters of this historical tale, in the order of Jean (Matt Damon), Jacques (Adam Driver), and finally Marguerite (Jodie Comer). Although this does cause some slight repetition which can lead to a tedious viewing experience, it is key in filling in the patches of plot wherein certain biases miss out in other chapters.

The shift between two unreliable male narrators to Marguerite’s truth is quite the compelling way to explore male ignorance and the toxicity of the patriarchy. The Last Duel is a well-crafted allegory for how the pain and suffering of women often gets frustratingly caught up in men’s pride and politics. Despite being set many centuries ago, this retelling only highlights how baffling it is that such accounts are still exceedingly relevant in contemporary society. However, there are instances where Scott’s film feels as if the male perspective is too dominant, which is slightly ironic considering the script’s ideological intentions.

Going into a film set in the medieval period, it isn’t far-fetched to anticipate an overwhelming amount of combat. To little surprise, Scott expertly balances visceral action in a way that further builds anticipation for the titular event, the last ever recorded judicial duel fought in France. The tension leading up to the moment that decides the fate of these characters is preserved, leaving the audience on the edge of their seats. The combat is brutal and graphic at times, elevating the stakes.

Visually, there can be a lot going on at any given time, especially during battle sequences. The grey tones these segments are drowned out with make them much less compelling than those that are beautifully lit with natural candlelight. Amazingly crafted costumes paired with elegant hairstyling are additional technical strong points for this medieval drama, as well as the aptly themed score from Scott’s go-to composer Harry Gregson-Williams.

Performances are essential in a story as naturalistic and nuanced as this. Not only does each actor have to flesh out their own role, but they are also required to perform scenarios multiple times, each through the eyes of a different person. Jodie Comer is emotionally captivating as Marguerite, giving an unforgettable performance and bringing such depth to her character’s heart-wrenching arc. Comer is the star of the show no question, fiercely upstaging all others.

Adam Driver (and his magical hair) does an admirable job of playing the villainous and multifaceted Jacques Le Gris, whereas Matt Damon is not as successful. His character is more stagnant and lacks the dimension others bring to the table, not to mention the questionable accent he cannot maintain. Though the biggest surprise turnout of the film is Ben Affleck by far, who in having so much fun with his supporting role, provides welcomed pockets of comic relief.

That being said, some notable scenes are difficult to watch and due to the cyclical structure of the narrative, The Last Duel maintains high levels of intensity throughout. It is by no means an easy watch and can be very grueling at times. The conclusion of Marguerite’s tale is immensely complex, alluding to the idea that on the surface this film is a story of how men often deem themselves saviors, when in reality, their pride distracts from the terrible injustices women face. The Last Duel manages to deliver this message eloquently through a high-stake character study, another engaging piece of work from a knight in his own right, Sir Ridley Scott.

The Last Duel premiered at the 2021 Venice Film Festival. The film releases in theaters October 15!