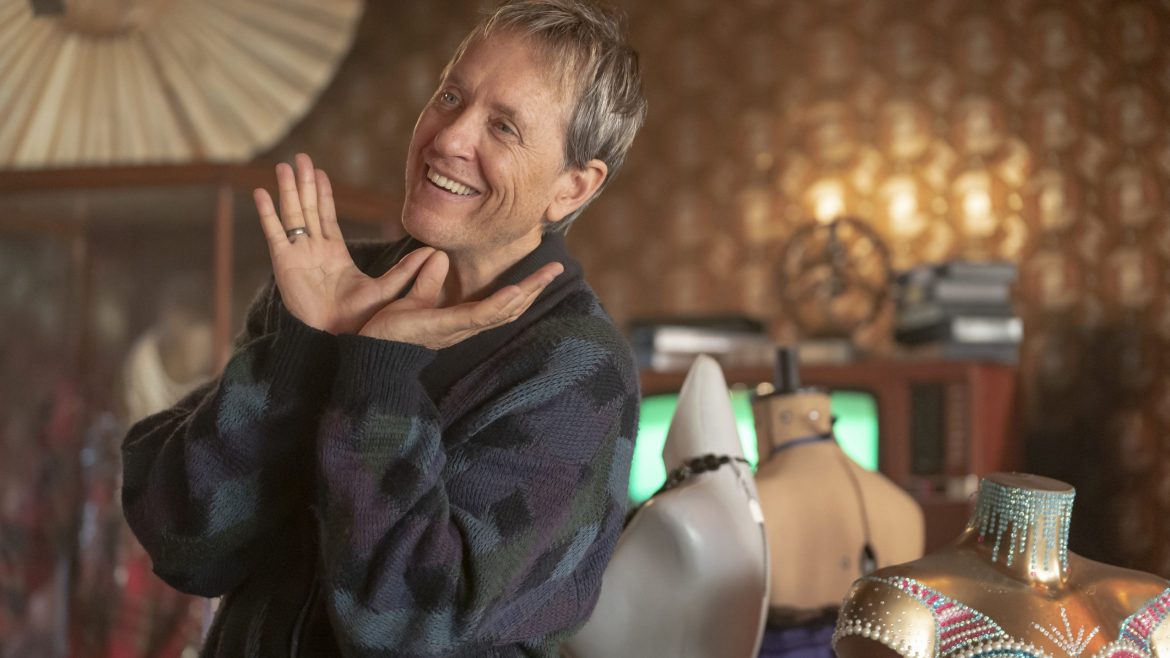 In just the last few years, Richard E Grant has shown off his acting prowess within some of the most well-known franchises in the industry, from Star Wars to most recently in the Marvel Cinematic Universe. Hot off the heels of his celebrated performance as Classic Loki, Grant is diving headfirst into a brand new role. If you know much about West End London, you would have most likely heard of a musical that shot to fame in 2017, Everybody’s Talking About Jamie. This tale of a young aspiring drag queen has now been adapted into film, with a bright lineup of fresh faces supported by a screen veteran in Grant.

Grant plays a tailor named Hugo, who reprises his drag queen persona Loco Chanel to guide sixth form student Jamie New. Being his first-ever musical, the Swazi-English actor lets loose and has plenty of fun in the role. However, the journey towards embodying Hugo, and consequently Loco Chanel, was one that required much research and practice. Richard E Grant sat down with us for an exclusive interview to discuss his Drag Queen portrayal and the importance of this story in times like these.

As someone who is familiar with theatre, had you heard of the stage show, or perhaps even seen it before this opportunity came to you?

Richard E Grant: I had heard of the show and had seen the documentary about Jamie Campbell that was on the BBC five or six years ago. I was very touched by that and was thrilled that they made a musical out of it. I had no idea that they would subsequently make a movie, or that I would be in it. So I had never seen the show but did see the documentary.

Did you end up getting a chance to see the play before you filmed?

Richard E Grant: I had the opportunity, but I didn’t because I thought that if I saw the person playing Hugo/Loco Chanel, I would be so intimidated that I wouldn’t be able to have the confidence to try it.

When was it that this opportunity came to you?

Richard E Grant: Two years ago, I had just come off the Oscar-nominated circuit for Can You Ever Forgive Me? with Melissa McCarthy. Our director, Jonathan Butterell, had seen that part and said, I think you should play Hugo/Loco Chanel. Now my argument against it was that it was a drag queen and gay character, and obviously, there were conversations about whether the character should be played by a drag queen or gay actor. Eventually, he said the entire creative team is gay and that he was very determined that I do it.

He told me he would surround me with a team of people to do hair, makeup, and learn walking and talking from. They also put me in touch with drag artists as I had no experience or nor had I ever seen [a drag show]. He was very persuasive and I’m very grateful that for that because I was genuinely terrified to take it on.

What was it about this particular story and set of characters that drew you to this project?

Richard E Grant: I think that after four years of Trump and the Brexit fallout that we’re dealing with here, inclusivity, diversity, and tolerance is something that we’re in short supply of. I think this film ticks every one of those boxes. Who you should love and how you should love, what you should wear, think, or believe are freedoms that you can easily take for granted – things that are denied to Jamie. I thought it was a great story of genuine courage.

Your character is just so rich in terms of personality, how do you go about preparing for a role like this?

Richard E Grant: I watched 11 seasons of RuPaul’s Drag Race in three weeks and then I worked with an avant-garde drag artist named David Hoyle in England, who’s the same age as me. He had such great experience with melancholy and vulnerability in his life, that I thought was the key to playing failed Hugo until he then has this transformation where he manages to rise from the ashes and become Loco Chanel again, briefly to be the mentor for Jaime.

How did it feel to put on the whole extravagant drag costume for the first time?

Richard E Grant: So being in drag took two and a half hours to get in the wig and the makeup. My respect for what women have to do to look great went off the chart.

When you work with newcomers like Max Harwood and Lauren Patel, how do you go about giving them advice or assisting them in their first feature role?

Richard E Grant: Don’t give them any advice, just do what to do because I’ve been doing this for four decades, all I do is hope that whatever you’re doing rubs off on them in terms of your technique. But I think that’s the last thing I wanted to do was to be an old veteran actor telling them what to do.

On the first day, I remember Max was just an absolute natural. I said to him at one point, “If you stand slightly this way, I’ll show you on my iPhone, this shadow was over your face. If you stand here, there won’t be a shadow.” Just simple stuff like that. Otherwise, I learned from them. I learned from the kids.

Do you think that a diverse audience will enjoy this film?

Richard E Grant: I haven’t seen it yet so I don’t quite know what the final product is. From the music, the trailer that I’ve seen, and having worked on it, it was made with such attention to detail and so much love and exuberance, that if even half of that transmits to an audience, especially after all of the endless lockdowns that we’ve had to endure. I like the fact that it is so celebratory.

Obviously, the film is musical. How does that differ in terms of your process in comparison to other films you have done?

Richard E Grant: Well, I had never done one before so I had a scene teacher, a dancing teacher, even for the tiny stuff that I had to do, just to give me the confidence to feel that I could do it. So all of that was a challenge that I’ve never had to do before and I loved it!

In terms of the music, do you record the soundtracks beforehand or is there also an element of live performance?

Richard E Grant: You pre-record and then you sing to a playback live, and then you re-record afterward as well for whatever is needed according to the edit. If they change things in post-production, you then do it again. It’s a three-part process but you are singing live each time. I was never in a situation where I had to lip-sync to things that were pre-recorded. You stand in front of an entire crew. It is not an audience. They can’t clap or boo and you can hear the playback in your ear, but there’s no other sound in the room have to just sing out loud.

Richard E Grant: Because the fairytale story of Cinderella is the person who seems to have no chance of going to the ball but actually ends up going. That is a story we know since all of us could walk or talk and it’s a story that goes through every culture. In some variation, the outsider who then becomes the insider, somebody who succeeds against the odds and against everything that they are told. I certainly identify with that because I was told that I would never be an actor. So I think that yearning to be seen and accepted for who you are, I think that’s universal.