‘Dear Evan Hansen’ Review – An Embarrassing Misfire of a Musical 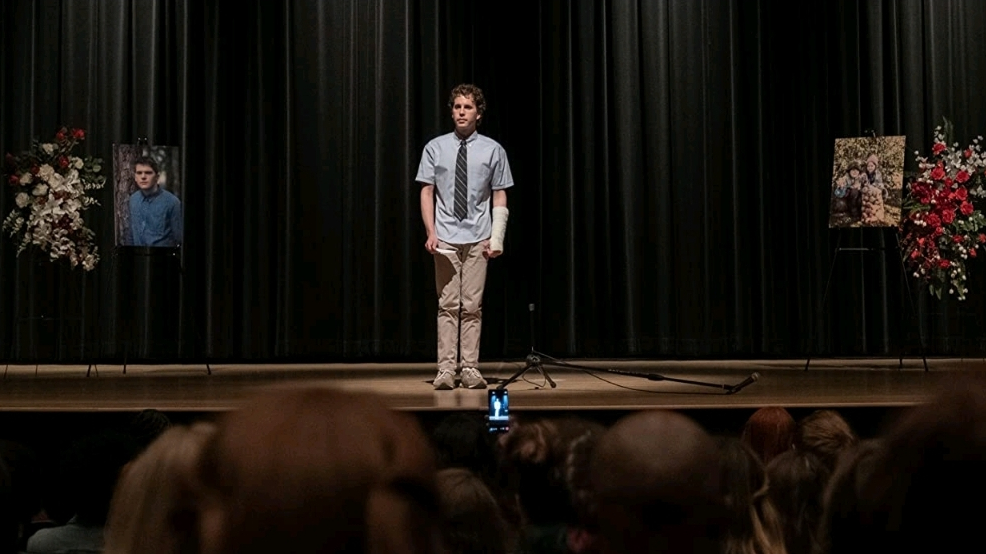 Without context, the music from six time Tony Award-winning musical Dear Evan Hansen paints the quintessential picture of a seventeen-year-old social outcast who finds it difficult to connect not only with his family, but his peers as well. He feels like he’s invisible. He loses a classmate to suicide which only serves to exacerbate our lead’s issues. Evan lies about something important to his friends. He feels awful, and lets you know through several songs centering on his own feelings. In the end, forgiveness seems to be given. However, don’t dwell too much on this as you listen to the music.

On their surface, the most popular tracks from the original Broadway musical seemed to paint a story that many would be able to identify with. What story that could be gleaned from the songwriting duo Pasek & Paul’s confectionery and bright choruses did not give the listener much incentive to read too deeply into any one song. Regrettably, with context now provided by the film, Dear Evan Hansen is arguably one of the most disconcerting musicals ever conceived. Helmed by Stephen Chbosky, the film is ostensibly a coming-of-age tale about young people grappling with their mental health and struggling to navigate the pressures of high school. Although things take a turn when Evan Hansen, seeming to mean well, lies to Connor Murphy’s family about being his friend after his death.

It’s obvious why Chbosky was brought on board to tell this narrative. His previous book-to-screen adaptations, Wonder and The Perks of Being a Wallflower, were not only critical and commercial successes, but the films also share thematic similarities with Dear Evan Hansen. The latter of the two perhaps being closest in tone and popularity to Hansen. It’s rather unfortunate then that despite arguably the best person for the job being hired, the film does not possess close to a fraction of the sincerity and heart held within any of his previous works. Though, when you consider that he was given a project that would star Ben Platt masquerading as a teenager for two hours while he takes advantage of his classmate’s death, it’s not all that hard to imagine why not even Chbosky couldn’t salvage this mess.

From the awkward and prolonged introduction song, ‘Waving Through a Window’, to the subtly unhinged ‘If I Could Tell Her’, Dear Evan Hansen struggles to find its emotional footing at every conceivable point. The supporting cast tries to do their best with the material they’re given, but every time the film gets close to a scene eliciting the proper emotion, Ben Platt’s incongruous and unsettling performance gets in the way. Frustratingly, this is a recurrence throughout the film.

Even if it’s true that Ben Platt was the first actor to play the eponymous character of Evan Hansen, does that also mean that he is the best actor for the film adaptation? If they wanted an actor who had already played the character, that would definitely be understandable. However, since Platt left the role in 2017, there have been at least six actors who have filled his shoes on the stage, the most recent one being Jordan Fisher. Of all these actors, was Ben really the best choice for the role this time around? It would appear that Marc Platt, the film’s producer, thought so. Yet, tragically for both father and son, this is not true.

Evan Hansen is already a difficult character to sympathize with, if you’re able to sympathize with him at all. While the character’s own mental health issues are relatable, when you get down to it, he’s someone who is choosing to repeatedly and knowingly abuse a grieving family’s trust. From Evan taking advantage of Connor’s death to date his sister and long-time crush, Zoe Murphy (under false pretense, and accompanied by the aforementioned, ‘If I Could Tell Her’), to deluding himself into believing he deserves money for what he’s done to the Murphy family. Plainly, the character is reprehensible under the best of circumstances, and the role is done no favors when it’s being played by someone who is noticeably an adult man.

This miscast does a genuine disservice to everyone else on screen, as their work is essentially being rendered ineffectual by association. Scenes with Amandla Stenberg and Amy Adams were surely meant to come across as moving and emotional exchanges, but in fact, are reduced to being unbearable to watch. The most obvious example of this emotional dissonance is a moment towards the end of the film between Julianne Moore and Ben Platt. She is consoling him after he has just performed the film’s climactic song, ‘Words Fail’. This is perhaps the only scene that feels as though the story might finally be able to evoke the emotion it’s so desperately been trying to for the past two hours and then the camera cuts back to Ben Platt. We see nothing but a very old, very tired-looking Ben Platt playing a teenager and just like that, the moment is over before it starts.

Perhaps it is unfair to lay so much of the responsibility at Ben Platt’s feet. It is very unlikely that any actor would have been able to exact the kind of reaction the film wanted. The script itself has a glaring issue with its central thesis, which seems to be: “Your hurt, and your own desires can come before others and their pain. If it makes you feel better, you are valid. It’ll all work out in the end.” This messaging, that behavior as bad as this can be rewarded with undeserved grace and absolution, seems irresponsible and ill-conceived. And as with many Pasek & Paul songs, there are admittedly a handful of tracks that could be considered ear-worms, but they are done no favors as Chbosky seems to be wildly uninterested in framing any of them with a sense of style. Nearly every number is visually dull and filmed passively. The only exception being ‘Sincerely Me’, the only musical sequence that features dancing.

It could be that Dear Evan Hansen is a story that only works as a stage musical, and the compounding issues in this adaptation may just be proof of that. It is hard to imagine how any audience could find this narrative compelling, but the undeniable success of the Broadway musical indicates that it has indeed found that elusive demographic. Multiple adaptations, off-broadway and international productions, all seem to indicate that this is a story that’s going to be around for quite some time on and off the stage. Still, as a film, Ben Platt’s nepotism pet project most decidedly does not work and it’s rather hard to imagine how anyone involved in the production thought that this was something that could be adapted successfully.

Far from being the triumphant and uplifting story as advertised, with a clear lack of interest behind the camera, and dismal casting in front of it, Dear Evan Hansen is sure to leave audiences wondering who they feel should feel more sorry for, themselves for losing two hours of their time, or the characters in the film being manipulated into believing the lies of a narcissistic teenager.

What The Release Date Delay Of ‘No Time...

The Filmography of Denis Villeneuve Ranked

Simon Kinberg on Returning to his Original Roots...

watching ben be in a relationship with zoe, who’s actress actually looks her characters age, was so uncomfortable