‘The Tragedy of Macbeth’ Review – The Definitive Shakespeare Adaptation | NYFF 2021 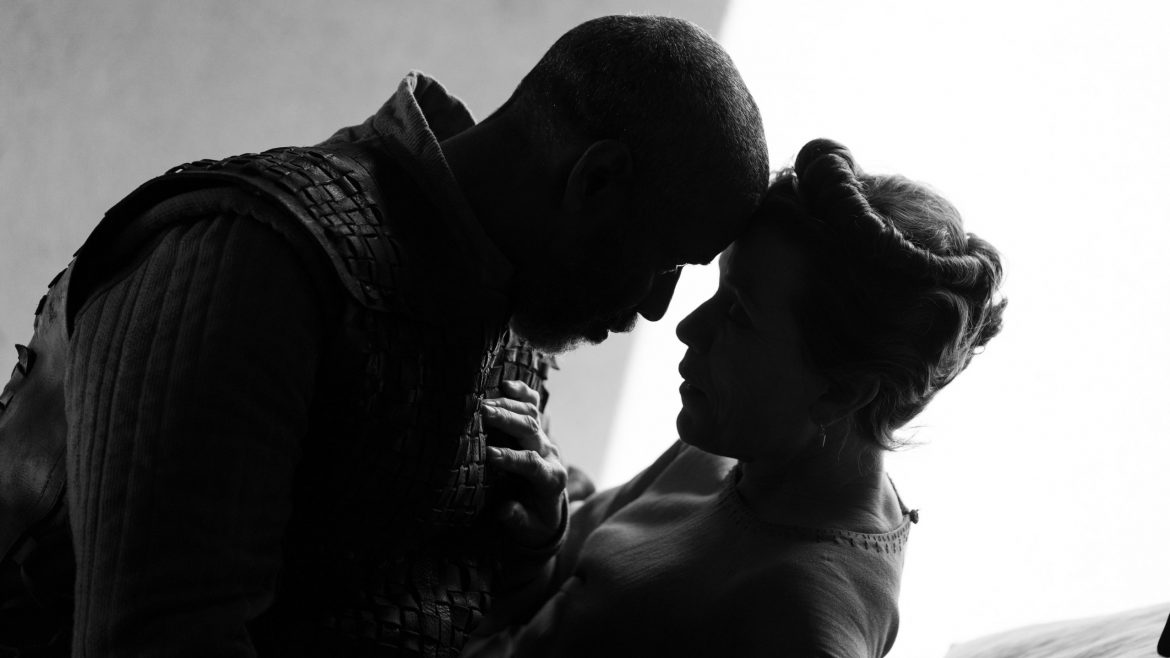 The history of theater being translated onto the big screen is long and storied, featuring many highs and many lows. Turns out there’s usually a reason why these narratives were written for the stage, an artistic medium very different from cinema despite some shared similarities.

But with The Tragedy of Macbeth, Joel Coen (in his first directorial outing without brother Ethan Coen) and his army of talented cast and crew have shattered that divide, managing to blend the screen and stage into something that conveys the mythological quality necessary to tell this story better than ever before. Aiming to create the definitive Shakespeare adaptation, The Tragedy of Macbeth strikes true and hits every mark with confidence.

Unsurprisingly, this retelling doesn’t do much to soothe those with distaste for iambic pentameter; like Kenneth Branaugh’s Hamlet, this particular cinematic realization celebrates its beautifully stilted, hyper-lyrical dialogue. From its rhythmic flow and structure to its thematic and emotional depth, the Romeo and Juliet bard’s writing has earned the respect of actors, writers, and casual audiences for centuries. With only a few tweaks here and there (some more effective than others), the film’s script should remind many of high school or college English class and would easily feel tired if not for the creative decisions that support it.

All-star casts are commonplace for Shakespearean films and that of The Tragedy of Macbeth is no exception. Denzel Washington’s Macbeth is a reserved yet commanding presence, bringing the doomed Scottish king to life with swaths of nuanced conviction. His fateful spiral works in perfect tandem with Frances McDormand’s Lady Macbeth, who breathes an air of headstrong fervor to the ensemble. A highly expressive and dynamic performer, McDormand steals nearly every scene she’s in and makes Lady Macbeth more than just her own – she makes it arguably the best, most entertaining role of her career.

Playing off one another, the chemistry between McDormand and Washington is distinctively complex, a seemingly effortless mix of guilt, judgment, and greed that multiplies with every interaction. Their closely-knit bond is palpable throughout Coen’s film, making the emotional distance between them and the rest of the royals and servants even more unsettling.

At the core of Macbeth’s commentary on fate and destiny, the Weird Sisters make intermittent appearances in the story – moments that the film leverages to revel in peculiar oddity. A more fantastical representation than their relatively straightforward depiction in the play, Kathryn Hunter embodies all three of the witches. Between her sickly bodily contortions and measured vocal performance, Hunter crafts the Sisters into a formidable, mystical presence that transcends simple dialogue; her crackling voice suits the role perfectly, her shifting vocal palette somehow capturing unease and melodious delivery in simultaneous lines.

“The false face must hide what the false heart knows,” goes the famous phrase. However, it’s how these characters inhabit the screen that reveals and underscores the vast array of emotive performances that bring life and depth to The Tragedy of Macbeth; while very much character and dialogue-driven, its visual presentation is why the film not only works but sets the bar for stage-to-screen adaptations.

Presented in starkly crisp monochrome and a tall 1.37:1 aspect ratio, this doesn’t exactly look like a conventional stage adaptation. Rather than use the cinematic medium to make Macbeth feel more realistic or believable, Coen spearheads a visual identity that comes off as more abstract than concrete. Whereas most would opt for elaborate, gaudy production design, Stefan Dechant’s rendition of Scotland and Macbeth’s castle is minimalist and almost dreamlike. Modernist design pervades the film’s buildings, with flat, textureless surfaces and simply-shaped windows, making for a maze of precisely-placed lines and curves on-screen.

This brutalist architecture works in conjunction with cinematographer Bruno Delbonnel’s stoic camera and harsh lighting to cast The Tragedy of Macbeth in still, high-contrast light and shadow. Not only does such a low-key aesthetic allow for moments of heavily stylized presentation, but its dramatic appearance also adds subtle emphasis to the actors’ performances. Wider views of these boldly lit sets are used to paint emotions more than anything else, building a black-and-white reality that feels more than appropriate for such morally conflicted characters.

The chunky, almost-square aspect ratio is key to the film’s success as well. Where many Shakespeare adaptations delight in adding location-based context to the playwright’s most famous scenes, The Tragedy of Macbeth doesn’t care so much about these characters’ surroundings. A tighter image forces focus on what matters most – the actors – and works alongside a minimalist production design to limit any background distractions. In some ways, this kind of concentrated focus makes moments of heightened drama more believable, turning a performance that many would mock as overacting to be demonstrative of a more abstract state of mind.

In attempting to faithfully bring the stage play onto the silver screen, Joel Coen unlocked something spiritual in the tale of Macbeth and his wife that many cannot see for themselves, locked away behind Shakespeare’s defensive poeticism. Despite a few muddled creative departures from the source material, the film synthesizes the comedy, romance, and dramatic flare embedded within decades-old text and creates something that feels modern yet archaic, familiar yet innovative. It’s in these ways and more that The Tragedy of Macbeth assumes the identity of a cinematic mythological fable – one that, though far from realistic, will persist across cultures and generations.

The Tragedy of Macbeth premiered at the 2021 New York Film Festival. The film debuts in theaters December 25 and on AppleTV+ January 14, 2022!