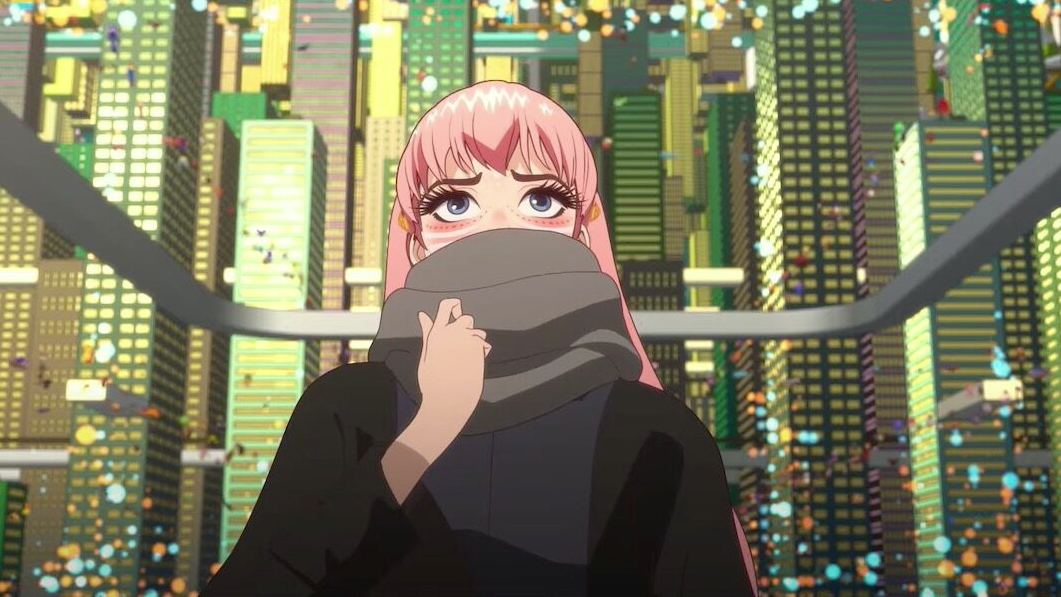 The internet has become a vital part of how people interact with one another; from romance and friendship to education and business, it is thoroughly embedded in global modern culture. Despite this, film as a medium is still in a stage of experimentation with how best to represent that as a mode of communication. The idea of online communities as a space occupied by people who can physically be thousands of miles apart would seem inherently uncinematic, and this is a challenge that filmmakers have spent the past decades trying to overcome. How do you possibly reflect an intimate moment shared by people on opposite sides of the globe?

Mamoru Hosoda’s latest film Belle solves this problem by not considering it a problem at all, inventing an expansive digital world allowing its characters to exist in close proximity regardless of where in the world they’re located. In closing this gap, Hosoda is able to tell a story about a universal kind of human connection that is both epic and incredibly personal.

As the name would suggest, Belle is a retelling of ‘Beauty and the Beast,’ transposed onto a digital world named U. The film follows Suzu (Kaho Nakamura), a young girl who becomes a musical sensation known as Belle in U. When her concert is interrupted by an aggressive creature publicly branded The Dragon (Takeru Satoh), Suzu and best friend Hiro (Lilas Ukata) make it their mission to find out who he is in the real world before U’s superhero-themed police force can reveal his identity to the world and presumably expel him from U. It is not initially made entirely clear what is at risk but as the plot develops, the minutiae of how U works becomes far less important.

The film’s narrative, while slow to start, becomes incredibly touching and takes the source material in a really unexpected direction. Suzu as a character is charming and the purpose of her dual identity quickly becomes clear as becoming Belle gives her the confidence to sing for the first time since losing her mother years earlier. This stretch of the film speaks to the very real ways that online spaces allow people to become someone else, or at least express parts of themselves they perhaps can’t in the real world. At the same time, Belle is clearly aware it cannot rest on this forever and there is real work done to establish the ideas that will carry the film to its close. The introduction of The Dragon is an especially exciting scene as Hosoda uses a bombastic anime action sequence to signal the shift in the film’s priorities and keep audiences on their toes.

Belle is some of the most exciting work of Mamoru Hosoda’s career, seamlessly moving between the fantastic spectacle of U and the charmingly simple drama of the real world until the two inevitably cross paths. Hosoda’s use of flat theatrical compositions is exciting, especially when employed for the film’s moments of comedy. Though Belle is understandably sold on the idea of the digital world, its most memorable and touching sequences take place in the real world, with the shift back into that space serving as a proxy for realizations about exactly what U had come to represent to its protagonist. While the mystery of discovering the beast’s identity is somewhat underplayed, it does facilitate some very entertaining moments and leads eventually to a really powerful climax. Its cast is also doing great work with Kaho Nakamura and Takeru Satoh elevating the emotion of some scenes massively.

Above many other things, Belle is a film about recognition and the value of knowing that you are not alone. Though it does not pass comment on the internet as a tool for communication itself, instead choosing to frame its presence simply as fact, the film does feel like a quietly revolutionary approach to representing these experiences on screen. Hosoda’s story is as sweet and emotional as anything he’s made before regardless of the details of how its events are taking place.