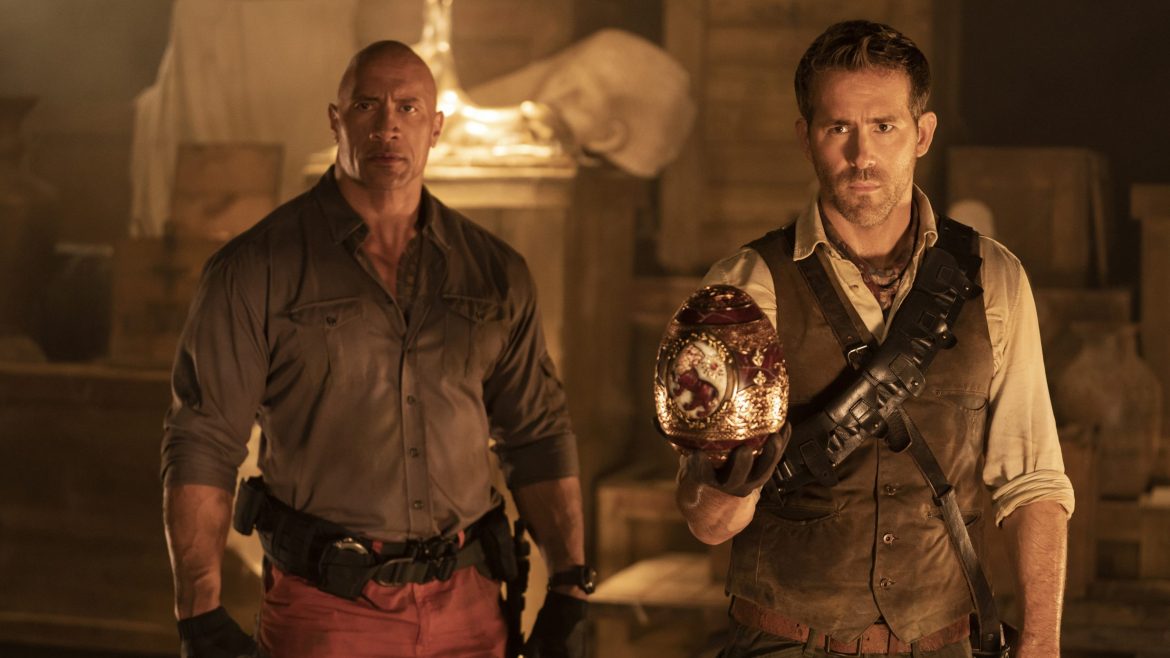 Ryan Reynolds and Dwayne Johnson prove to be a dynamic duo in Red Notice. Coming in with an excessive budget of around $160-200 million (reported as the largest in all of Netflix history), this latest original film places all of its bets on star power, exotic locations, and plenty of CGI. Johnson’s hot streak as the world’s biggest action star continues after the rollicking adventure that is Jungle Cruise. Actually, one jungle-set scene in the latter half of Red Notice could easily be mistaken as one from Jungle Cruise. Meanwhile, this marks Reynolds’ third major outing of 2021, after Free Guy and The Hitman’s Wife’s Bodyguard. He’s up to his usual, funny nice-guy shtick. The film’s trio is finally rounded out by Wonder Woman herself, Gal Gadot, who plays a cunning art thief with a self-knowing wink.

Red Notice begins mid-heist as Nolan Booth (Reynolds), the world’s greatest conman, attempts to steal one of Egypt’s rarest treasures. However, the prized golden egg that he swipes from the Roman museum turns out to be just a piece of a larger Macguffin-filled puzzle. Agent John Hartley’s (Johnson) first encounter with his soon-to-be partner sees them engaged in what feels like an endless pursuit. Although Interpol and Hartley retrieve the invaluable possession, it’s soon stolen once more and they are forced to go back to square one. Things become especially complicated when Hartley is framed by Nolan’s rival only known as “The Bishop” (Gadot), who also seeks the three treasured eggs.

Surprisingly, Gadot doesn’t get much screen time, despite being billed as a central figure. In fact, British actress Ritu Arya’s supporting Interpol agent is arguably a bigger presence. She is constantly breathing down the neck of the film’s lead duo as they attempt to outmaneuver the law in their dangerous competition to be the first to secure the three prized eggs. Gadot’s character, in the wider picture, makes a lot of important decisions that propel the story forward but is more of a background force until the second half.

Even if it’s nothing audacious or deeply thought-provoking, Rawson Marshall Thurber’s heist flick is still an undeniably fun romp. Flying from one colorful locale to the other, Red Notice digs deep into the archetypes of its deceptive, chase-filled genre. It’s a non-stop ride that utilizes its conventions to form an intriguing, yet familiar narrative that’s easy to follow. On the technical side, it boasts sweeping Hollywood-style camera work and is even accompanied by a Bond-like score. But what makes Red Notice stand out, as a heist tale, is Reynolds’ comic touch that injects new life into what could’ve been just another dull by-the-books Netflix original.

While the buddy-comedy aspect of Red Notice is great, the film lacks much-needed energy when it comes to its action set pieces. All of the fight scenes are passably okay but given the depth of the film’s money-heavy pockets and the genre one would assume that more focus would be put into the choreography. It’s no James Bond or Mission Impossible. As aforementioned, barring locations and star power, the excess money here is clearly spent on elaborate shooting equipment and heavy use of CGI to hide much of the film’s green screen. The digital effects are most shabby during the Russian prison portion, for they obviously couldn’t shoot way up on an ice-cold, snowy mountain in the midst of winter. The overuse of glossed-up CGI is somewhat understandable in these instances sure, though it’s not always as forgiving

Ultimately, Red Notice excels when it’s funny yet loses pivotal steam when diving head-first into action. There are many gags that stand out; without spoiling too much, some particularly humorous moments include references to the Attenborough brothers and Jurassic Park. Without a doubt, Red Notice will do swimmingly well for Netflix given its accessibility as a simple and enjoyable, globe-trotting adventure.