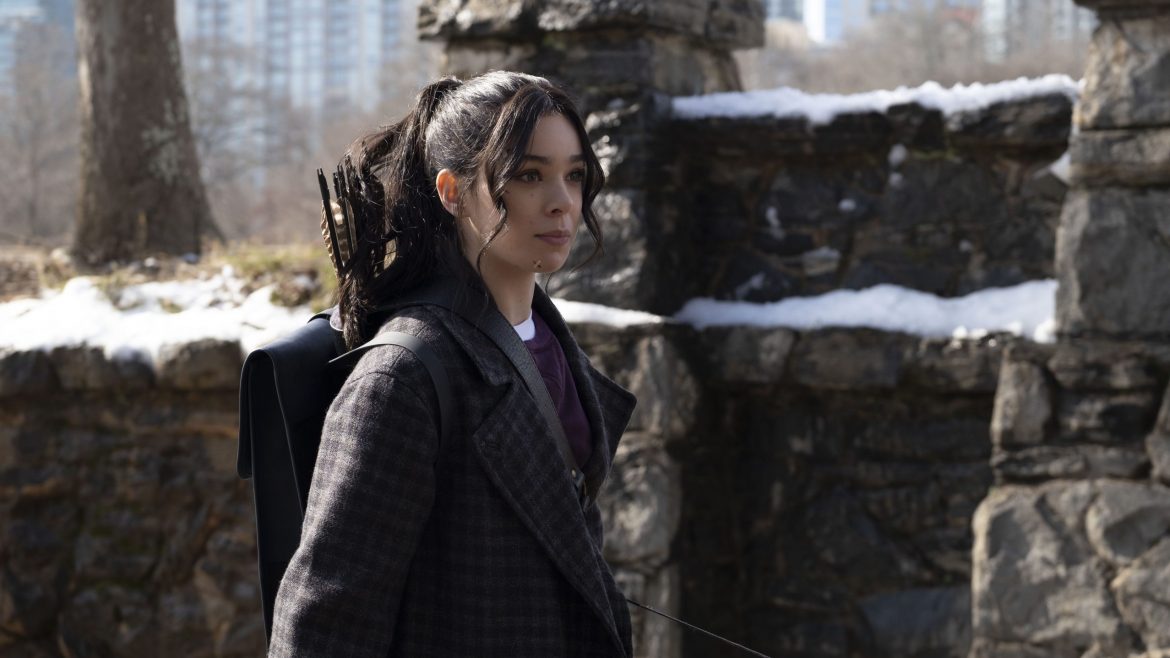 Marvel Studios’ latest original series, Hawkeye, puts the founding titular Avenger at the center of his own story, delving deep into who he is and where we find him following the events of Avengers: Endgame. The show also has another Hawkeye, however, in the form of new character and comic-book favorite Kate Bishop, played by rising star Hailee Steinfeld.

Introduced in 2005 by writer Allan Heinberg and artist Jim Cheung, the character rapidly rose to prominence as the cool, quick-witted Young Avenger that delivers the action and skill set of Hawkeye with style and hilarious aplomb. It was in Matt Fraction and David Aja’s 2012 comic series, in which Kate and Clint co-starred, that sent the character supernova, becoming a fan-favorite that has been requested for years to be added to the Marvel Cinematic Universe. Drawing heavy inspiration from Matt Fraction and David Aja’s run, Kate Bishop has finally arrived on the scene courtesy of Disney+.

“I really do feel like playing this character sort of forced me to find a confidence and a determination and discipline that’s always been inside of me, but I really had to bring it out of myself for this, to do this character justice,” actress Hailee Steinfeld said of the role during the official Hawkeye press conference. “I feel so lucky to be playing a character that is so loved by so many and that people have been waiting for some time to see brought to life.”

Original Hawkeye Jeremy Renner seems just as enthused to be joined by Steinfeld, creating a unique mentor/mentee relationship in which the two must actively work together to solve their own internal conflicts. “She was ready. It’s pretty awesome. It makes me feel old that I see a lotta people come in and see a lotta people go. I’m like a grandpa. It’s terrible.” It also represented a real-world passing of the torch according to Renner. “Hailee came in ready to rock… I just wanted to communicate with her that I had her back, and that there’s gonna be a lotta strange things that go on. You know, it’s different than other types of filmmaking.”

This on-set rapport between Renner and Steinfeld helped to create the dynamic we see in the show of an older, grumpier Hawkeye learning to lighten up a bit via Kate’s eager, can-do attitude. Renner added, “It was very fun figuring out the evolution of this dynamic in this relationship, and I think, ultimately, there’s a really true friendship there and an understanding. Kate sees Clint as someone, despite his past, as someone who wants to do good and wants to help people, and that’s all she wants to do in life. She’s inspired by him and motivated by him and wants to be at his level and is very over-eager, and he puts up with a lot.”

With this only being Hailee’s first appearance as Kate Bishop in the MCU, fans can only wonder what is next for our brand new Hawkeye, as the foundation of a potential Young Avengers adaptation seems to be laid. “This feels so crazy to me right now just sitting here with this group of people. I’m so grateful to be a part of this show and this universe, and it’s only the beginning.” Just where could we see Kate Bishop again? More could be revealed as Ant-Man and the Wasp: Quantumania draws closer, as that film is set to have another Young Avenger, Cassandra Lang, step into the spotlight. Learn more about the whole Young Avengers team here before moving on to Hawkeye on Disney+!

Our review of the first two episodes: Marvel Hits a Bullseye